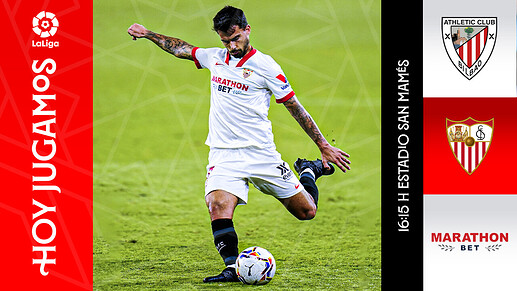 The chance to rectify a 2-match losing skid presents itself with a daunting task at San Mamés.

Our midweek fixture had Sevilla pick up from where they left off the preceding weekend, with a barrage of goal attempts at the opposing goal. Thankfully, it had begun early against Rennes, as Munir hit the woodwork with only 6 minutes played. But despite the 23 total attempts, only 1 found the net. Perhaps we can attribute that to a lack of sharpness, but Lopetegui’s Sevilla is not yet known for scoring routs. They have scored more than twice in LaLiga only 4 times last campaign.

Without looking too deeply into the stats, we can at least presume that Sevilla took a step in the right direction with their overall play. It will certainly take more than a game against a depleted French side to back that claim, but the positive signs were there. Many balls were sent long to the left channel to find Acuña, including the move that led to the game’s only goal. With ‘El Huevo’ beginning to settle in, we can look forward to attacking from more angles, and avoid an over-reliance on Navas’ right side. The result may have also coincided with the return of Jules Kounde to the starting lineup, which almost always guarantees a clean sheet.

Lopetegui is very good at winning ugly and he makes good changes in the 2nd half that has turned the tide well for us in matches. Now we just need to work on trying to make matches more comfortable and turn on the style more.

We can disregard the fact that Athletic have lost 3 of their last 4 matches, since our opponent’s form is often irrelevant when it comes to how well we play. Virtually every victory has been hard-fought, especially this exact fixture last season. It was our first league win in San Mamés in over 10 years. We are without one of the main protagonists from that triumph in Éver Banega, but Lopetegui is seemingly still seeking his best XI. Or has he already found it?

A similar squad list has travelled to Bilbao, without a frozen out Gnagnon, and Gómez, Suso & Idrissi all nursing muscle injuries. 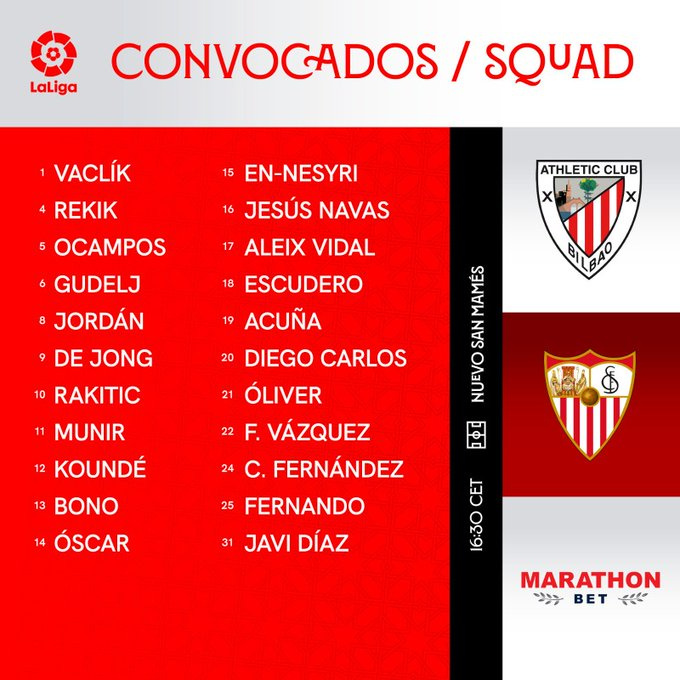 La Katedrala has never been a ground where 3 points are even remotely close to a possibility. But this game may have arrived at an opportune time to determine if we are serious. Our league form has stumbled a bit of late, but big teams manage their way through adversity. We staked our claim to a Champions League place at this stadium last time around. This time, will we assert our standing as title contenders?

It’s all about building on our success.

Pretty much our best team for me at the moment.

In hindsight, I agree with you. I’ll be fine with Rakitic & Suso sitting out a bit. Munir deserves this starting role. I wonder how Lope will setup today’s game.

Guessing YEN is a winger? 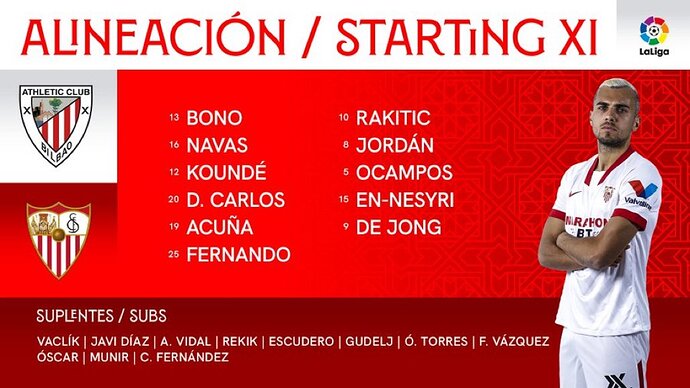 So I guess it’s safer for YEN to lose the ball on the wing instead? I should go back to sleep

YEN is a winger

I thought at Leganés he played more as a wide forward rather than an out and out centre forward anyway. I’m intrigued to see how it works as we have obviously identified a weakness, I’m guessing exploiting YEN coming in with his height at the back post to attack the ball?

Looks like we’re playing a weird formation where Ocampos and Luuk are the supply chain for YEN. So I see YEN more forward, Ocampos less and Luuk even less. Probably a made for Bilbao concept.

It’s just an attacking mess, but must be part of of some plan,

I would mind this less if Óliver or Óscar was on instead of Rakitić or Jordán, cause then we could shift them to the wing and be flexible with a 4-4-2. But i’ll let the coach coach…

High center of gravity. Gets knocked off the ball too easily.

And then he scores. Well worked goal.

I only just got in from work and missed the first 7 minutes. Just in time for the corner and then goal.

You mean Del Cerro Grande (The big Zero) couldn’t find a VAR to quit the goal from Sevilla? Things are looking up.