What does this team want to accomplish? Was last year’s Europa League win enough to satisfy our ambition? Is the Champions League only for the elites & the nouveaux riches? Are Sevilla overachieving, underachieving, or simply at their level?

There is no question that this club has set out to do great things. We managed to keep Kounde, Diego Carlos, Ocampos and more over the summer, all while spending extra to keep this squad together. This does not happen without wanting to go further. Thoughts on a team turning a new leaf have all but faded away after successive dismal displays. Now, with a season seemingly spiraling out of control, there is 1 match ahead of Sevilla to help define it as a progression or regression. 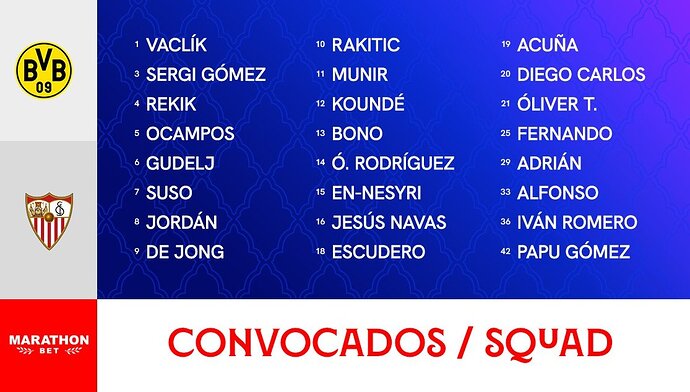 There are some concerns on whether Lopetegui will have to settle for a makeshift defence, after some doubts over the fitness of Bono & Kounde, who have both made the squad. But there will also be question marks over how he sets up his team. Normally, a reliable defensive unit, Sevilla has started conceding goals in atypical fashion. Is this a time to fight fire with fire?

Is our squad animal enough to pull this off?

All I want to see is us having a go. We need to be more proactive and believe in our own abilities.

Calling this a rough patch for Sevilla is putting it kindly. We were all aware how much was riding on this run of matches, only to find out the worst-case scenario is becoming a reality. The real sting is to witness a team that appears to have no fight left inside them. What has been on show lately is a Sevilla completely uninspired. Will there be any fire to even fight with?

We always take 4 to European Away games I think.

I have to see either Óliver or Papu from jump or else this tie is doomed. We got no lead to defend, and preventing BVB from scoring is quasi-impossible. We need goals. I’d go with this: 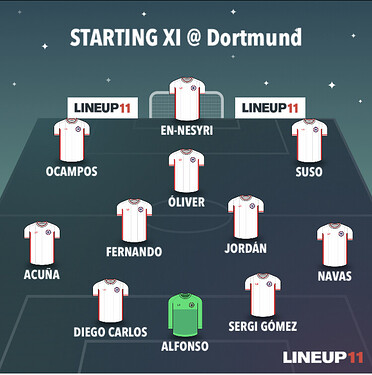 That looks good if Kounde and Bono are definitely not fit and ready to play. However, I’m afraid it shifts more to a 4-2-3-1 of that sort and Lope will stay with the preferred 4-3-3. It looks like a good one though and it should produce results, Papu could play in Oliver’s place as well with this one, but not as a winger in 4-3-3 or as the left midfielder.

I want to see

Looks like we all agree on the names. We easily have the potential to make the comeback but lately our capacity of what we are showing vs our ability has been a bit worrying. Dortmund is all in the flow right now. Having to force into a team that has it going for them is such a pain too. Percentage wise I’d give us 20%. Noted this is only if Bono is in.

The game calls for a different approach and the question is … ‘are we capable of playing a different plan?’

All of Lope’s system suggests otherwise. But this is Sevilla FC, and the group mentality takes precedence when the chips are down.

Is our squad animal enough to pull this off? In my opinion yes.

Is our squad animal enough to pull this off? In my opinion yes.

I like the way you put this Tim, and I certainly hope we see a resolute and aggressive SFC tomorrow.

All I want to see is us having a go. Go all out attack and try to score early. We need all the pacey and creative players on the pitch. I definitely agree we need Oliver, suso, Ocampos and YEN to start. YEN hasn’t played much lately so he should be fresh and raring to go.

I don’t want to see Rakitic involved at all. He’s past his best and sadly Barca saw us coming with that move. I’d like Óscar to come on off the bench early in 2nd half. It’s about time we see more of him. We need to be looking to the future and playing players who have more energy, pace in the team and in the prime of their careers.

Navas will start as Vidal put injured. Personally had Vidal been fit I’d have played him. Sadly I feel Navas age is showing same for rakitic and we need to move on from these players in future.

Hopefully the holy trinity start. We need kounde and DC to start well and fernando protecting them well. It goes without saying that we need Bono to be fit. Man if we have Vaclik in goal I’ll be hiding behind the sofa again haha.

I want lope approach to change starting tomorrow. Go out to try win the game from the first minute. We need that tomorrow and also for the big derby with Betis. We need to be more proactive and believe in our own abilities.

Just to be clear, I think the team will abandon the the Lope philosophy and do it their way. They have ingredients in the cake even though Lope thinks he’s the the Chef.

Betis 3-2 up. Things get worse

That Betis game is massive now!

Best dig out a green shirt in case it all goes downhill on here by next week.

Damn Betis. We need to put them in their place haha.

Raphael Guerreiro out for BVB as well.