It is still only October, and Sevilla have already suffered 2 losses in LaLiga, while it took 17 matchdays to incur as much last season.

Losses allow for teams to directly attempt to rectify the issues that led to those results. On the weekend against Eibar, Sevilla was undone in the 1st half after being ineffective with their possession as they struggled to advance the ball. The 2nd half display was much more ambitious, but our poor finishing was once again apparent as we were held scoreless for the 3rd straight game. Since De Jong’s 8th minute goal against Barcelona earlier this month, it has been precisely 352 minutes of football without a goal.

Óliver Torres: “I don’t think there is a scoring problem, the problem would be if we did not generate chances. We have high quality players up front and it is a matter of luck if the goal falls on our side.”

Julen Lopetegui: “We have looked for {the goal} in many ways and we have not been successful in the final ball. We cannot blame anything on the attitude of the team.”

Playing in their first ever Champions League campaign, Stade Rennais came away with a draw against Krasnodar last week, which has left all 4 teams level on 1 point each in Group E. With an already reputable youth academy, Rennes have a very promising squad, with many members having been promoted directly from the youth setup, including head coach Julien Stéphan. Currently sitting 3rd in the Ligue 1 table, the French side from Brittany suffered only their first loss of the season against Angers last Friday. There may be even more encouraging signs for Sevilla, as ex-Sevillista Steven Nzonzi has been ruled out through suspension by UEFA*. Equally disheartening for Rennes is the absence of 17-year old midfield prodigy, Eduardo Camavinga, who misses the trip to Nervión due to injury.

In dissimilar fate, Sevilla was given good news as their young French star, Jules Kounde, has been cleared of his COVID-19 diagnosis, and has rejoined his teammates in training on Tuesday. Summer signing Oussama Idrissi has also recovered from his muscular injury and has been training with the group since Monday. Are the wheels starting to turn in the right direction for the Rojiblancos? 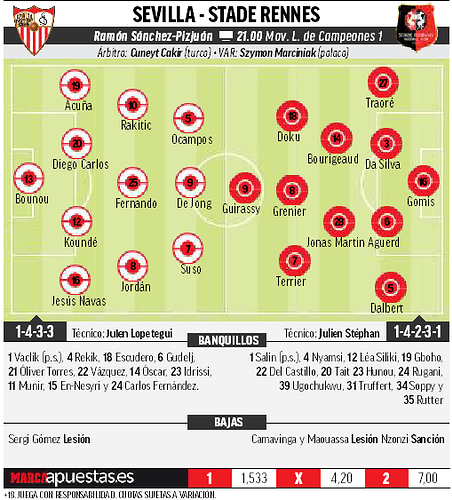 Ruts are inevitable, so while the results are disappointing there’s no need to panic just yet.

And what we can attest to is that this Sevilla team hasn’t simply forgotten how to play football. As disappointing as the result was against Eibar, there were still many positives to pull from the match. We are still witnessing a Lopetegui team developing into a more attacking side, as it has already solidified key components of its structure. Perhaps in a post-Banega world, that development has been curtailed. What is promising is Sevilla’s tendency to display its best efforts against the more “challenging” sides, as seen in the matches against Bayern, Barcelona & Chelsea. Is it simply a question of mentality?

“If yesterday I was proud of this group, today I am much more so. There is always room on the victory car; where you have to ride is in the car of defeat, and there I will always be with my people, in front of everyone. The colors are mine, and these, I do not change them for anything.” - Monchi after the Eibar loss

Winning this one would be good, but I’m quite skeptical considering the recent performances. If we put on a performance similar to the one vs. Chelsea then we might win it, but put one as vs. Granada and/or Eibar and we’d be lucky to get 1 point out of this.

The worst thing about our current system of play, tactics and strategy is that we need to be playing very well to win games - unlike the likes of Atletico that don’t need to do that to win the winnable games all the time. We won’t be a top team unless we’ll be able to win some of the games at 50% of our force, ever.

Hopefully Kounde will feature, but he has missed 2 weeks of training and I highly doubt he will start tonight. Maybe later on as a sub or he’ll make the comeback vs. Bilbao on Saturday.

And wow… that guy Camavinga is 17 years old only? Spectacular… I’ve seen him play for the senior France NT, can’t believe he’s 17 only. Too early to say as he’s still basically a teenager, but if he keeps it up and develops properly, he’s a big star in the making.

Really really hoping we kick our season off with a bang tonight and grab a few goals. Time to wake up and get ourselves up and running before we get cut adrift. 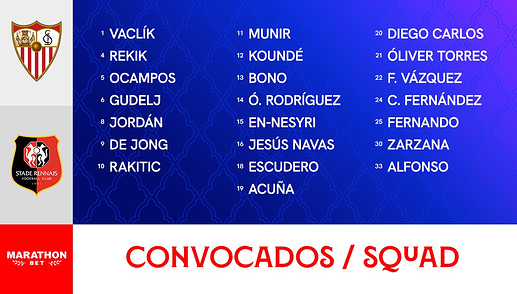 Madre Mía, what a squad we have. Has Rekik been on the bench yet?

It might be a while until Rekik gets a game. It may be sooner depending how long Gómez is out for. Still not sure why he wasn’t called up.

That’s how I think before every game, it’s time to score a convincing amount of goals, maybe 3 or 4.

I used to think 5 or 6 but this Sevilla is way too disciplined to get carried away.

Idrissi. I just hope he isn’t going to turn into Dabbur mk2

Can we please score some goals? Would love to come out of this match with a W

Hopefully we can get back to winning ways here. Vamos sevilla!

Chelsea scored in the 37’ Krasnodar’s keeper with a horrific blunder. 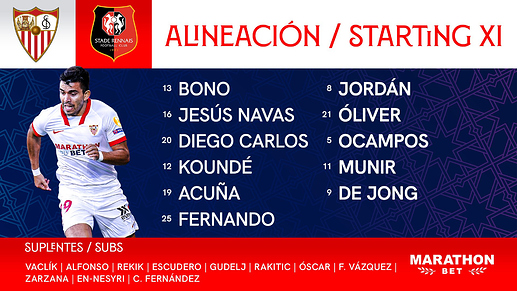 It all rests on Óliver. Hopefully we don’t start off too slow this time.

Edit: I just peeped that Suso didn’t make the list.

Wait? Don’t say you did…

But what him and Navas have going on I quite like. I am with you

Amazed by Koundé starter spot, a decent fit Koundé > others I guess.

Also, I can’t avoid getting good hopes and the idea of a solid victory coming up again.

I just always prefer Suso cause he complements whoever is on the other side. Munir often loses the ball & Ocampos likes to take on the world. Hopefully 1 of them will look to combine with Luuk.

This is an excellent line up. Pretty much our best team for me at the moment. Rakitic has been poor, Suso can be a 7/10 some games but a 2/10 in most.

Going for the Win from the off, I love it.

But please, I don’t want to discredit Rennes but without their two midfield beasts, has to favour us by a lot. Or how many more do they have?

From what I know Rugani a great defender from Juve. Grenier, a good talent from the youth of Lyon but don’t think he fully made what was promised. And apparently Doku, they paid a sum of 26m for, more then anything we have paid. He has to be a dangerman upfront for them. Besides those lots of unknowns for me.

Also Soppy has been rumoured to be on our Radar, very interesting what he can do against us.

Excited to see what Acuña does today. He was one of the brightest spots in the Chelsea match, IMO. Perhaps Sevilla will actually be able to find some strong finishes against Rennes’ defense today.

I’m sure glad to have Kounde back today too.