Option For Moving To New Stadium

So there was news today that there is a proposal from the board to move from the RSP to the Estadio La Cartuja similarly to what Atletico did this season. It would increase the Sevilla FC seating capacity to around 70K.
What are your thoughts?

I hope they don’t do this. The RSP with the new renovations seems plenty nice for our team, plus all of the local pubs would suffer without the home games.

I haven’t seen this news Chris. I can only think it would be considered while RSP was being expanded. Have you got a link for it?

Wow, I’m a bit traditional but I’m tempted to say yes to it, but there’s a lot of ‘ifs’.

If you open the PDF file it looks incredible inside but it would cause a lot of division amongst the fans because la Cartuja is a bit out of the way. There’s also the cost and the time, it looks like a complete rebuild of the olympic stadium, ripping out the running track, re-situating the seating closer to the field, building a third tier to the grades.

I also think Sevilla would get more than €160m for the plot of land in Nervion but a complete rebuild of the olympic stadium is going to cost a lot more (Wembley cost 1 billion). Though it would have large earning potential with rock concerts and other tournaments. There is also a lot of free land adjacent along the river that could potentially be converted to the training facilities (which are presently of third world quality).

But the real killer is 20 bars (imagine 60,000 people wanting a cerveza on a hot night)

It’s a bit of a pipe dream, or a magnet for any meglomaniac entrepreneur.

Could be a shared project between Sevilla FC and the council, who never run out of other peoples money.

Ah well, I’ve learned that SevillaFC have rejected this totally, not in line with official club policy.

A concept rendering from 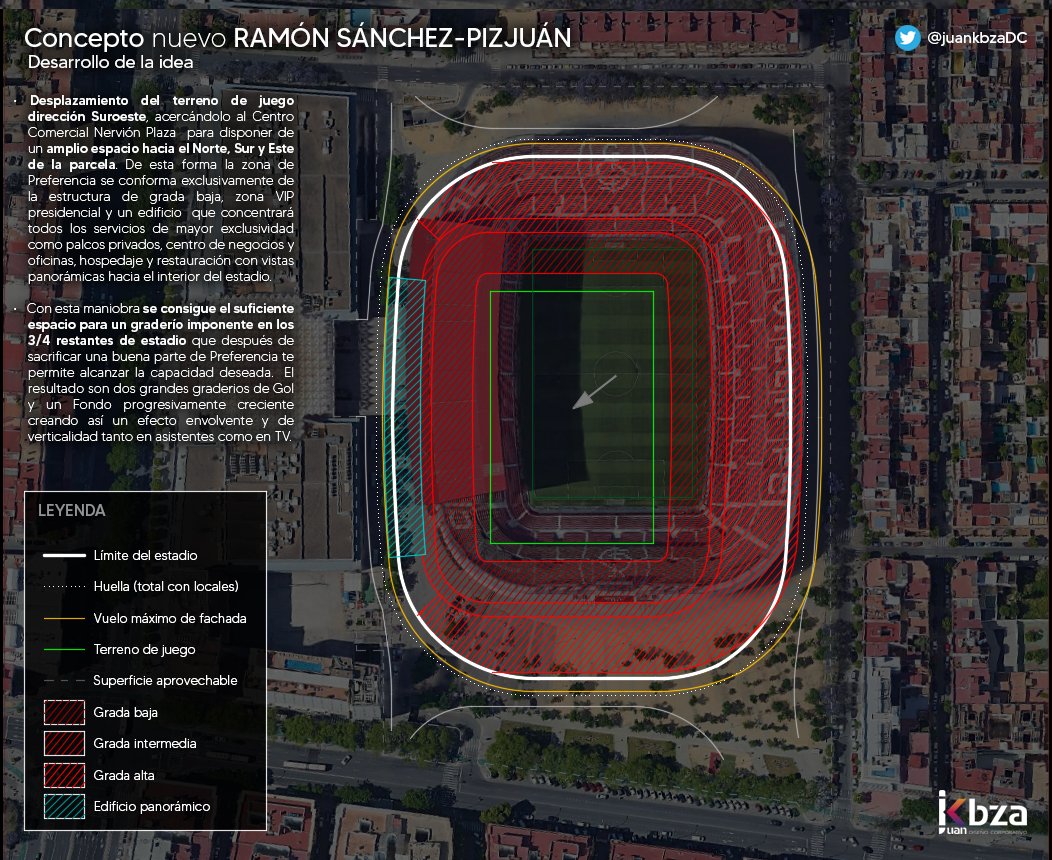 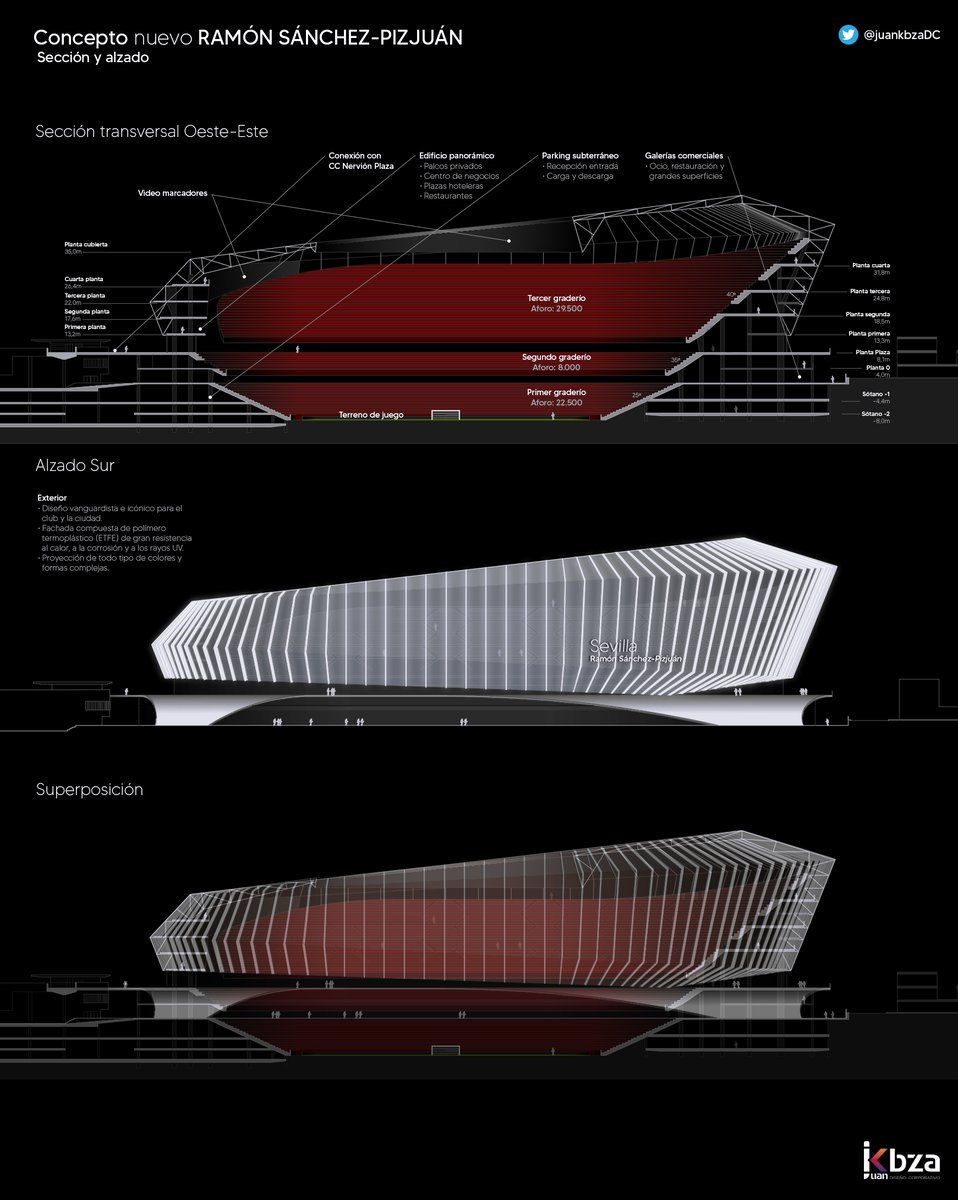 I’d love to see some red on that outside, but it looks sweet.

What a terrible stadium for watching on TV.

So is this still going on or it’s not happening… I mean moving to La Cartuja and all that crap?

@ShendM there is a desire for a new stadium, no official plans and if it does happen, Sevilla would have to play in an alternative stadium for a few years (3-5 probably).

@sterusebn the layout I shared is in the current stadium’s lot. No expansion is necessary. This is an unsolicited design from a local architect just showing the possibility.

It’s a good question Steve. The whole block was left to Sevilla in the will of Roberto Alés and it amounted to 900m2. I don’t know if that includes upto Nervion Plaza (a shopping mall with cinemas) but I’ll find out and let you know.

Yeah, I was wondering about the shopping center that’s near by. Even if the club owns the property, there’s not a lot of space to expand without massive demolition work which is incredibly expensive.

Also, even if they own the land, they presumably can’t just break any leases that are in place. They’d need to wait for them to expire over time before they expand outside of the existing lot.

The image of the development was entirely on the existing block but ate up the Shopping mall, Nervion plaza.

Ok, more info. The Shopping Mall is private as I thought but all the other land on the block belongs to the city and it’s Municipal public land. Sevilla own the stadium from ground up. There’s no exact information available to me to say what land in Nervion was left to Sevilla in the will of Roberto Alés.

That means that any development cannot simply eat up the private shopping mall and that all development will be under the control of the city of Sevilla. So SFC don’t have a strong hand in the design of a new stadium on that block.

Well if we ever move to a new stadium there’s a contender for the name thanks to the president of E. Frankfurt, the ‘Estadio Mickey Mouse’. 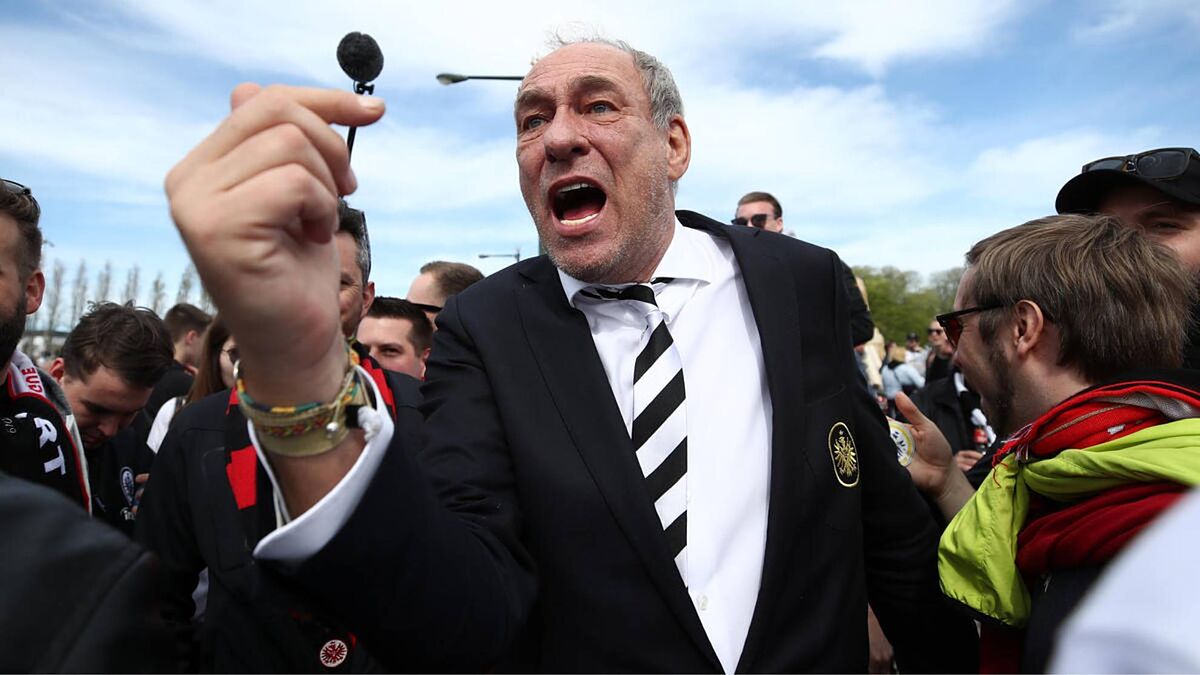 Eintracht Frankfurt president goes on the attack: 190,000 fans couldn't get...

Eintracht Frankfurt president Peter Fischer rallied his club's fans in the hours leading up to the Europa League final in the streets of Seville on Wednesday afternoon. He did so

I wonder what he would’ve said had they played in Arena Kombëtare in Tirana with a 22,5k capacity.