Option For Moving To New Stadium

PSG having a similar capacity as us btw. If he said that to the wrong one, those arab owners would have been insulted and probably directly build a 380.000 seat stadium for next year. 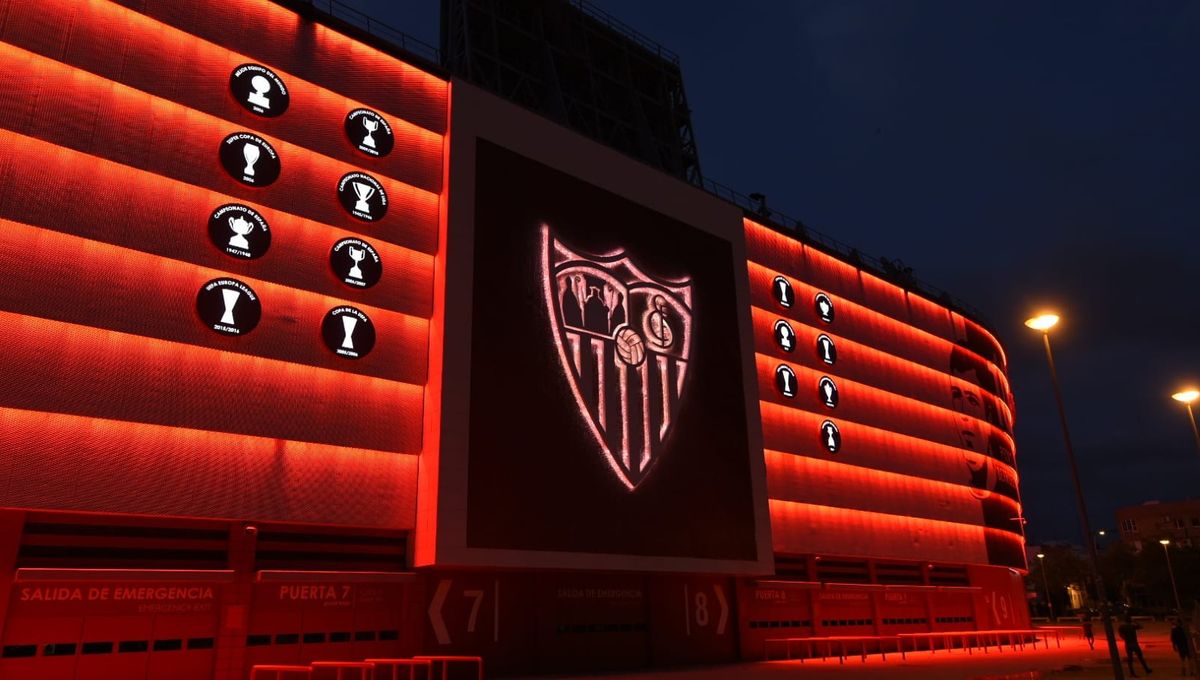 The start of the season has not been as expected in Nervión, with Sevilla FC in the lower-middle zone of the table, with only five points added out of a possible 18 that have been disputed at this stage of the competition. With Julen Lopetegui and his coaching staff on the tightrope from practically the same moment the course began , the closing of the market was not as expected at the Sánchez-Pizjuán, where the fans sang “Pepe Castro, resignation” on more than one occasion due to the situation that Sevilla FC is going through in terms of sports , in addition to other areas that have little or nothing to do with whether or not the ball enters. Namely,a climate of tension that is breathed in Nervión. An environment that is unlikely to announce anything or talk about matters other than purely sports , which worries and occupies a sevillismo that squeezes while looking at the box when looking for culprits of the current moment.

For this reason , among other issues, neither the president José Castro nor anyone within the board of directors of Sevilla FC have been able to bring up the famous Legends report , the one that until not so long ago was talked about quite frequently publicly whenever there was opportunity and at the same time nobody has seen for the moment. At least for now, and it is that, as a server already announced, it is kept in a drawer waiting to find the right moment . That one that for the moment has not finished giving and that, seen what has been seen, the same does not come soon or even never just arrived. And it is that rarer things have been seen in recent times around Sevilla FC.

Days ago I was told that the Legends report on the RSP has been sitting in a drawer for days, waiting for the right moment to make it public. #SevillaFC

For those who are not up to date, the legendary Legends report is nothing more than a study requested by Sevilla FC so that this leading company in business lines for sports venues can pronounce on the movements that the entity must make to promote Ramón Sanchez-Pizjuan . That is to say, a vision on which the future of the red and white stadium will revolve, which by all accounts has become too small. Whether an extensive remodeling or the need to build a new Ramón Sánchez-Pizjuán.

And the truth is that the report has been owned by the Sevilla FC board of directors since last June, approximately . The president himself confirmed it, waiting for its complexity so as not to make it public at that time: “We already have it, we have received it. It is wide, important. We are going to study it and from there we will say what the question is. We are talking about a report that is economical and sporty, but that does not tell you what to do at all. It advises you, which is not binding. We will do what we think is necessary in our stadium.” Since then, as no one escapes, Sevilla FC has only gone from bad to worse , which is why no one has dared to tackle this hot potato.

The Legends report , as Castro rightly said, is very dense, but it could be summed up briefly in a couple of aspects, which, after all, are the ones that really matter to the average Sevilla fan. In the first place, that the best thing for the club would be to build a new stadium, instead of continuing to remodel the current Sánchez-Pizjuán , which has already been patched up for years and adapted for moments such as the UEFA Europa League final that was played on Past course.

To give you an idea, as ESTADIO Deportivo has learned , the aforementioned report says that building a new stadium would require an investment of approximately 500 million euros , while the remodeling of the current Sánchez-Pizjuán, with the shortcomings that this could have, would mean a cost of some 350 million euros for Sevilla FC . That is to say, a pharaonic investment that, in these times, invites even more to keep the report well kept under lock and key.

Logically, the Legends report does not stop there and reflects many other realities of Sevilla FC as an entity. One of them, perhaps the most important, is that the club does not have the money to undertake said work right now . That explains, perhaps, why there is no rush to make its content public either.

Apart from economics, another of the lines of argument in the aforementioned report is that the current plot of land that Sevilla FC has is not enough for a new stadium. Summarizing it a lot: a new Ramón Sánchez-Pizjuán does not fit in the place of the current one; nor throwing away the ‘old’ before . The future Ramón Sánchez-Pizjuán would need a new location, which is why many who are around the club have already begun to spin the coconut about it. Some of the ideas have even been filtered by some on social networks, such as taking the stadium to the land of the old Cruzcampo factory, nearby; between Nervión and Polígono de San Pablo.

And with this, everything is clarified, I don’t want to say that it is a proposal that Sevilla FC, officially, is studying as an entity. But it is an idea that is there on the part of some with weight in which, in addition, the City Council would have to collaborate, exchanging some land for others, and in which it would be necessary to reach, on the other hand, an agreement with the current owner of these lands, a businessman from the Basque Country With which, I understand, there would not be too many difficulties if everything finally ended up taking shape. And I repeat that today there is no formal proposal nor is it something that is being analyzed at the entity level, but it is an opportunity that many do not miss for various reasons. That would make it possible to build luxury homes in a neighborhood like Nervión, where the square meter built is one of the most expensive in the Seville capital.

A report, the Legends, which in short says that it is better to make a new stadium than to rebuild the old one. That this would not fit in the current land and that, most importantly, there is no money to face this work. A complete report, very complete. But also very expensive… We better not talk about how much it has cost the club, so as not to stir up the sensitivities of the staff even more.

Damn Brian way to make us even more depressed!

Alright, I’ll admit that I steer clear of these news, but I have to put this out there. Why do all these plans not start with demolishing Nervión Plaza. Seems idiotic to move the whole stadium elsewhere when you could just take a wrecking ball to Nervión Plaza and immediately have plenty of space… Right?

That doesn’t seem very fair to all those businesses in the plaza. I’ve only been in there one time though so I’m not sure what kind of businesses it has now.

It would be kind of cool to demolish them both and just incorporate the mall as part of the stadium. Put the team store right in there.

That doesn’t seem very fair to all those businesses in the plaza.

This would presumably be a consensual demolition, not just a wrecking ball without consent. In fact, since they wouldn’t be able to use eminent domain or whatever the law is called in Spain, presumably whoever owns the place there would be quite well compensated.

but who would pay for it?

I found this little tidbit about the sponsorship deal with Degiro:

Q: What would happen to the sponsorship if Sevilla don’t qualify for Europe?
A: We don’t disclose a lot of things in our contracts. Contracts always have different dimensions, one of them is commercial success. For us the most important point is to develop our brand in the Spanish market. No one has any doubts that Sevilla will continue playing in the League, with an important role. We also have no doubt that Sevilla will qualify for European competition next year. First let’s enjoy this season and then we will evaluate with the club how we can continue this sponsorship.

Just that Sevilla could lose sponsorship money if they don’t qualify for Europe. Just makes the decision on Lopetegui that much more important.

Nervion Plaza is in two sections and they’ve just completed putting a third storey on the first retail section. I don’t think Sevilla have the means to buy out such an operation.