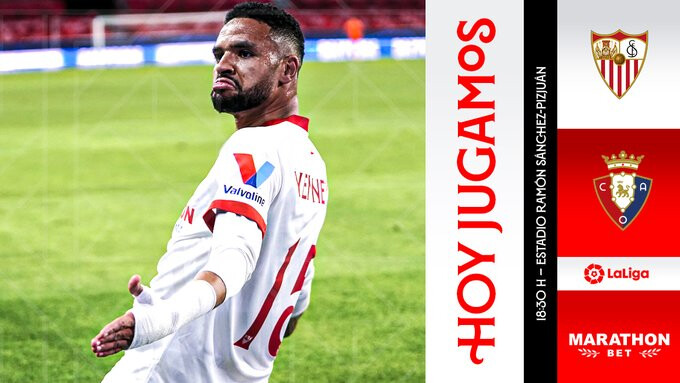 Sevilla looks to reverse their 3-match losing streak in LaLiga after Wednesday’s heroic showing in the Champions League.

It was an incredible display of character midweek that saw Sevilla fightback from 0-2 down, and play the entire 2nd half with 10-men while still trailing. The attacking play was relentless and it never seemed the match would end without them getting some kind of result. The win leaves us with a comfortable lead at the top of Group E, as focus must once again shift towards LaLiga.

This run of 7 matches that began in early October always seemed manageable, but Sevilla’s style of play is partly responsible for how these fixtures were resolved. There are still key elements that Lopetegui needs to implant in this team that he’s built. Many components are already in the version we’ve seen in the Champions League, while there’s still a struggle to reproduce a complete performance in the league. Either we start well and fail to close-out a match, or we come out sluggish and try to salvage a result in the 2nd half. There will always be ebbs and flows throughout a game, but we have yet to see a convincing 90 minutes from Sevilla in the league. 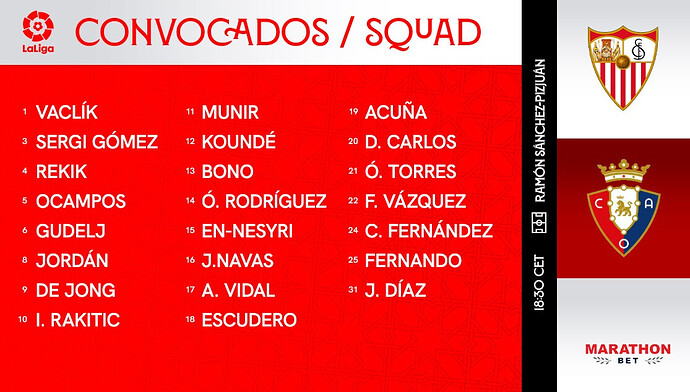 Another international break awaits after today’s match. Julen would hope to enter that period with a much needed league victory that has eluded him since October 1st against Levante. A number of player performances have given encouraging signs of improvement: En-Nesyri scoring 3 goals in 2 matches, Rakitic starting to settle in midfield, and Diego Carlos’ impetuous leadership in defense, which has earned him his first ever callup to the Seleção.

There is nothing more important than the match in front of us. Everything rests on how we will approach Osasuna, and if the team truly had a spiritual awakening in midweek. Can Lopetegui instill the proper mindset to get out of this rut?

Lopetegui: “We’ll approach it like we do every match, going to the limit and focusing on nothing else.” 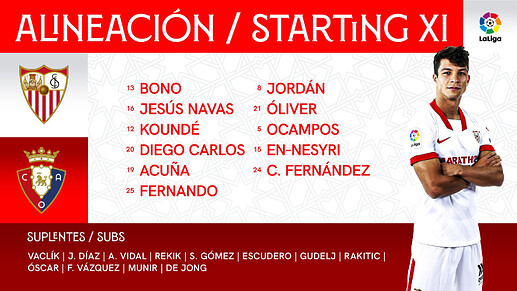 Btw… what the hell is going on with Idrissi’s injury case? He didn’t break anything or tear any ligament as far as I know… anyone has more information on that? It’s weird that he has still not played one minute with the team.

A decent formation in overall. Would’ve liked to see Oscar instead of Oliver but it’s ok, as long as Oliver performs well. Rakitic and De Jong the only ones that started vs. Krasnodar and benched tonight. I expect both of them to feature in the second half - hopefully we won’t need any miracle like against Krasnodar and that winning this match will be easier for us.

I’d prefer Oscar to Oliver because it’s Osasuna.
Something that bothers me is that Idrissi is still out, It never bodes well when a new player cannot get into match fitness (surely we wouldn’t have bought him if it were more than a minor injury).

Oscar instead of Oliver

what the hell is going on with Idrissi’s injury

what the hell is going on with Idrissi’s injury case?

It’s a muscular injury that’s been bothering him since the transfer was done. He’s recovering so it’s likely he returns after the Int’l break.

It’s a muscular injury that’s been bothering him since the transfer was done. He’s recovering so it’s likely he returns after the Int’l break.

Hopefully so, last thing we need is another Rony Lopes, comes for a fee and couldn’t muster anything at all.

Would prefer Oscar too given he played pretty well last time, either him or Rakitic would feature depending on how things go by the second half.

Barca coasts through with an easy victory against Betis. I wonder when Sevilla will ease past opponents like that, without too much effort.

Doesn’t really compute, muscle injuries are usually 3-4 weeks max, hamstring down to 5 with advances in treatment. Probably a complication of something very minor getting aggravated which implies careless behaviour.

This linesman is blind af

One just blew YEN offside but he wasn’t when the ball was played forward.
Good ball by Oliver to release Navas.
It’s a question of wearing them down and not giving them a 2 goal start like the last game. It should be a tough 50 minutes ahead before we crack them open.

Navas gonna try to come back on? They need to sub him. Stop fucking with it J Lo

But just sub him off for his own good, Acuna is doing nicely on the left.

Acuña down too. Accident prone so far. Half the bench are warming up.

So possible hamstring for Acuna and quad for Navas, not good.

With Acuna off Lope would definitely hold off subbing Navas unless WWIII occurs.

With Acuna off Lope would definitely hold off subbing Navas unless WWIII occurs.

WWIII would be losing Navas beyond the INTL break. Take care of him Lopo!

What kinda voodoo has Navas been practicing? He went down for treatment, but Acuña is the one subbed off??

A few chances, but mostly in transition. Took time to really hold possession in their half. I hope Escudero doesn’t downgrade the attack too much.

It would be a shame not to win this one. Let’s bring on Oscar and De Jong in the second half, maybe Rakitic later on too. Oliver and C.Fernandez out.