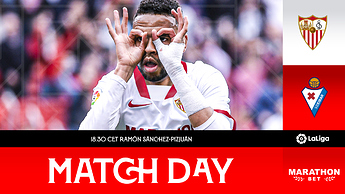 Our games are gradually becoming unbearable to watch. It’s not pleasing to the eye at all.

In an attempt to avoid a 3rd straight scoreless match, Lopetegui may look for different combinations in midfield & attack. With Jordán serving his red-card suspension, all signs point to Óliver Torres to be the next man up. We have clearly been lacking creativity and decisiveness in the final third. Will the ex-Porto man be the one to breathe new life into Sevilla’s attacking play?

Lopetegui: “Eibar was the rival that did the most damage to us last year here.” 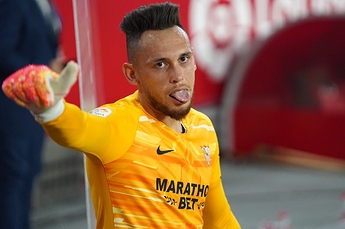 This was also the rival against which Ocampos had to become the emergency goalkeeper, and make a save from his then opposite number, Dmitrović. The Argentine was absent for Friday’s training and is seen as doubtful for the Eibar match. Kounde continues to miss out as he awaits a negative COVID test. Idrissi is nearing a full recovery, while Gnagnon is still training separately. 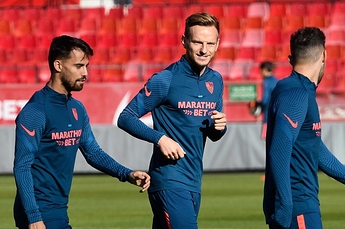 As mentioned by Julen, Mendilibar’s side is often difficult to play against, and “demand a lot from all aspects.” They will also have the chance to deploy our own Pozo & Bryan, as there are no clauses preventing them in playing against us. But despite the opponent, Sevilla will have to find form soon after dropping points in consecutive La Liga matches. With Champions League games every week, will the players maintain focus to keep competing on the league front?

Lopetegui: “All competitions are important, but LaLiga is the tournament of regularity, the one that feeds us and where we have to compete under any circumstance."

What I have seen from him he looks like he has lost a fair bit of weight. Starting to feel like he is just being treated like crap to me, but then I don’t see him training every day.

Vamos sevilla! Let’s get the 3 points. A win today will mean a very good start to campaign.

Winning this is important, let’s do it! 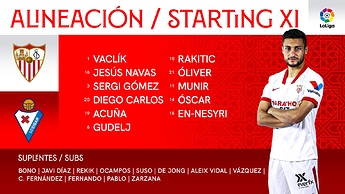 Vaclík gets his 1st start, and so do Oliver & Oscar.

Are we really resting players for mid week?

I still don’t know why Navas is not being rested. Vidal will need some playing time or he will be totally out of touch when we need to forcefully replace Navas (injury, suspension etc.)

I don’t know… is Navas a robot?

Be good to see what Óscar can do.

Be good to see what Óscar can do

Hoping for a free kick opportunity!

Be good to see what Óscar can do.

Hope so. Midfield demolition expert, a bit like Gatusso but with quality and nowhere near as dirty.

Just do the business Sevilla

Yeah excited to see what he brings today. A young player and can bring a lot of energy and quality to our side. Let’s hope for a strong performance today!

Are we really resting players for mid week?

I don’t know, Bono doesn’t need a rest, Ocampos was really average in the last game. Fernando perhaps is rested.

No but he certainly doesn’t need to be dropped either. I remember back in the Sampaoli, Berrizzo days we would rest the starter keeper before UCL games. Seem to remember a beating AT Eibar just before one game when Sirigu played instead of Sergio Rico.

Koundé, Carlos and Fernando are the Trifecta, holy trinity of our great defence, we are missing two, how will that pan out? we’re also a bit different in midfield. It’s time to invent a new alliance.

So far it’s a midfield stalemate.

Tough game. Very much a midfield battle at moment. We can’t get our attacks going yet. Hopefully it comes soon.

Can we trade Vaclik? He is worthless