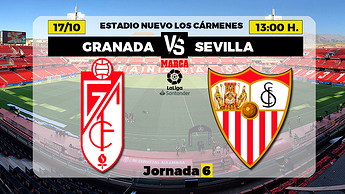 Back from the 1st Int’l break of the season, we encounter Granada in another Andalusian derby.

Seven matches in 23 days. This will be a demanding set of fixtures. The calendar crunch has actually already begun for certain players, as many have represented their national teams in the last few weeks. The recent international call-ups may impact how Lopetegui selects his team Saturday afternoon. 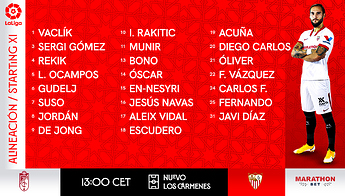 The most impactful team news came this past Thursday, as Jules Kounde tested positive for Covid-19. He is asymptomatic as he remains in his 14-day quarantine period. Also missing the Granada trip is new signing Idrissi, who worked separately from the squad due to an undisclosed injury. There are also doubts with Navas, who still made the squad, but missed training today.

Diego Martínez: “Sevilla is one of the greats in Europe and I want to beat them.”

Diego Martínez is a very adaptable coach with a very competitive team. Apart from the 6-1 mauling by Atlético, they are unbeaten in all other matches, with a Europa League campaign ahead of them. We did the double on Granada last season, but the 3 points are far from guaranteed. The ex-Sevilla Atlético coach is as impressive as Lopetegui when it comes to his in-game management. 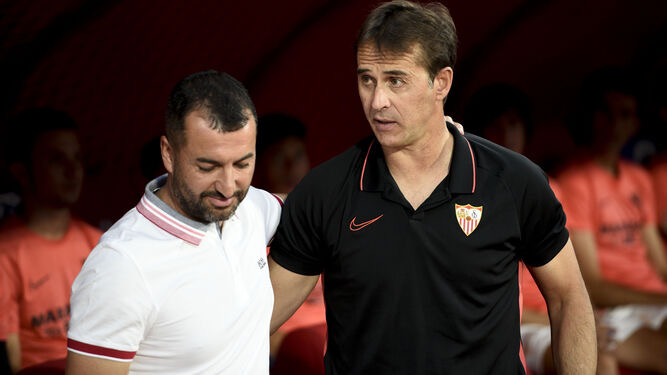 As seen previously, Lopetegui prefers to start the season with an habitual starting lineup. With a deeper squad at his disposal, perhaps he will look to make more changes than usual. Can this be a chance to start Carlos Fernández against his old mates? 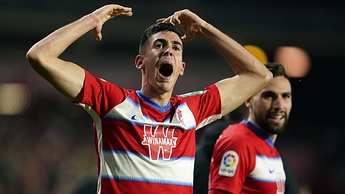 What is your predicted starting XI for this match?

Anyone know what name Carlos Fernández actually has on the back of his shirt?

Not able to watch it tomorrow. But I expect de Jong up front. Probably nothing off normal. Would be for putting Carlos against his old team, stuff like this is always an extra motivator but I don’t see Lope do anything weird. If he likes Rekik a lot he puts him in, otherwise he just go with the first back up Sergi Gómez. Will we score easily? My guess for tomorrow, not so much, I expect a low and slow gsme but still a victory the trademark I guess. Will read up for sure when I can.

We should be able to win this one… I would’ve said with Kounde and Navas available. But since neither of them will be on the lineup (Kounder confirmed, but Navas could miss too), I have doubts.

It’s a bit worrying with Koundé and possibly Navas out but we should be able to overcome Granada even if it’s a tough grind.

See some comment on twitter just a moment ago from a Sevilla “supporter” with regards to the squad list the club put up made me feel slightly awkward.

“Gnagnon tested positive for coloured butter?” was how it translated, I’m guessing he was referring to cocoa butter, but either way what a stupid comment to make, especially on social media.

We have Granada’s best player so… 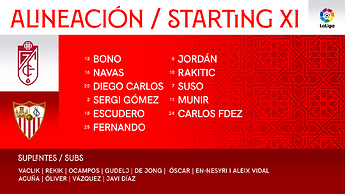 And Navas plays, when does this guy get a rest?

When only he says so.

I would guess referencing his weight since that is why he is out. Probably not the best joke to make though.

Escudero injured in the 18th; Acuna on to replace him. Looked like a muscle pull in his rib cage area.

How many subs can we use?

How many subs can we use?

Pretty sure it is still five with the sub patterns like last year.

Not enough was happening in the game so the ref decides a red needed to be shown? What a prick.

Weird bit of events there. Lopo giving the ref an earful walking off the pitch.

Never a yellow in that second foul. I get the first one, but the second?