So, who are we lining up at CB this weekend? Rekik and Nianzou again? Gudelj?

Honestly, I think this beginning of the season would have a whole different aspect if Marcão hadn’t fallen through the cracks…

but isnt the issue that he was already injured? ie… we found him amid the cracks?

Nianzou has had a few seasons going up against Lew in training so hopefully, that helps?

We are currently traveling south through spain and will be in sevilla for the game on saturday. Not looking forward to it as much as usual. Hoping for a miracle, or at least not a humiliation. Just seen that the ref is lahoz which makes it even worse.

Read a Tweet suggesting that Acuña will/should play Left of Fernando in front of Telles…what do you all think? Is that a Lopetegui formation?

It would be worth experimenting. We wouldn’t stand a chance with the usual midfield anyway, and I really hope Jordan will not be part of the games vs. Barca and City. He is in the poorest form of his career and would be a huge liability if he starts. 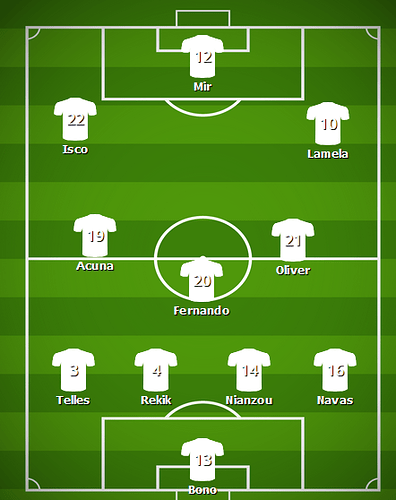 That is if we go with the usual Lope 4-3-3 formation and system. But if we could somehow accommodate both Isco and Papu in the lineup effectively then I’d go with that option instead.

If any of the following players play then it’s a guaranteed loss or even big embarrassment: Jordan and Gudelj.

Not sure if Suso is ready to play but I wouldn’t start with him until he proves that he is worthy of a start.

Also all of this assuming Marcao, Dolberg and Januzaj are not fit to play. 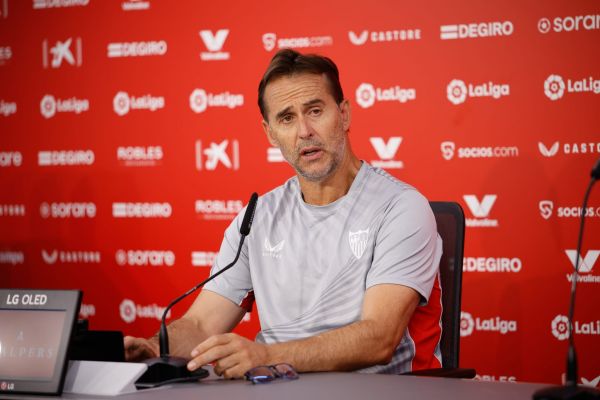 Forgot to mention in my pre-season importance point that without pre-season training with a club, a player will also miss the physical contact preparation, which is crucial in preparing for the upcoming season.

It is like preparing for a boxing match for months without sparring matches.

i didnt follow, why isnt Rekik even training with the team? is he hurt? obvi he hasn’t been playing well, but he’s not a cast away after three games id think, right? and if so… shouldn’t we have sold/loaned him?

Not sure, but I think he has picked up an injury in the last match vs. Almeria.

He has done generally well in the first 3 matches, although he was at fault for the 2nd goal of Almeria and shared the responsibility with Nianzou in their first, so he’s not 100% stable. However, he also saved us a point with that goal vs. Valladolid.

Knowing that Rekik is prone to injuries (just like last season even when he wasn’t playing that much), we should’ve signed or loaned in another CB. It’s a total lack of seriousness to keep counting in Gudelj or even Carmona. Plus Nianzou is still not fully adapted with the new environment and it will take some time.

So yeah… I feel for Lope in this one. Good that he spoke out and minimally protested about the physical condition of the new arrivals, so that one’s on the management.

With that said, Lope is still responsible to find a way and make things work, that’s what he’s paid for. Every coach in the world would like to have the best possible squad ever, but sometimes you have to do more with less, or else you’re just an average coach - meaning even lesser paid coaches could do Lope’s job in that case.

Lope’s statement on Rekik: Karim had a problem in Almería and we don’t think he will make it. We are going to wait for tomorrow but I think he is going to go very fair - google translate.

So we’ll have to settle with a Gudelj - Nianzou CB pair. Then Ryan wants me to be more optimistic

thanks for the clarification! yeah, saying he’s been bad is a bit harsh… he’s just been very inconsistent.

No expectations for this game. Also more and more responsibility on the players. New players always bring old players spirits up and lets hope for a good performance. if we are ready to fight for a result and for their manager or seal the fate a little bit more with an underperformance.

Carmona will start. I bet Fernando and/or Gudelj starts back there with Nianzou as well. I expect a very defensive lineup.

We should never ever play 4-3-3. The essence of that style is to have a forward and two wide players with pace, that then produces around 20% of your goals by jumping the offside trap from midfield or from counter attacks from defence.

We don’t have the pace to accomodate it.

This is the wrong time to face such a mighty and strong team. I fear humiliation tomorrow.

The new signings have injury issues which is far from ideal.

The news also coming out of lope presser does not bode well. Clearly there is no more harmony left between the Sevilla board, lope and the players. Let’s hope for a miracle or if things keep getting worse then significant changes are needed. It’s to late for this season though.

We need El Himno blasting tomorrow, i would have a complete mix of players, start Isco and change it round… im not the best analyst or tactical, but lets not be outfought.

I’m not scared of this Barcelona team. There are holes. Let’s get our mojo back!

They leaked the lineup early! 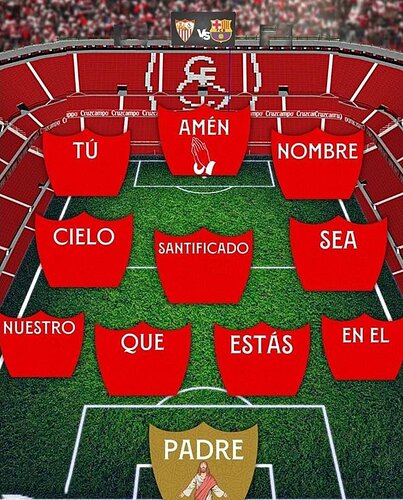