Sevilla come back home from a very disappointing trip to London to face La Real in the league. After giving up a goal before 6 minutes before half time, the team held on until the 112th minute of extra time when Yarmolenko scored the winner to knock out Sevilla from the Europa league.

Now coming back to the league with a focus of salvaging something from the season by securing second place, Lopetegui’s squad is wounded both emotionally and physically. Sevilla had a few more injuries pop up in the West Ham match. Gudelj went down just before the winning goal, Rafa Mir, Jesus Navas, and Martial both have some sort of muscular issue.

It looks like Gudelj, Navas and Martial will be able to play tomorrow as they have been back in training. Mir looks to be the one that will miss as will Papu, Diego Carlos, Acuna, Suso, Lamela, Fernando and Rekik. YEN played 91 minutes against West Ham only three days ago, so his minutes maybe limited. This makes another interesting juggling match for Lopetegui where he will undoubtedly have to rely on some youngsters to fill the positions.

La Real come into the game having won three out of their last five matches. in the league. After a huge 4-0 defeat to Bilbo in early February, La Real bounced backto beat Osasuna 1-0 and Mallorca 0-2. They lost to Real Madrid in Madrid, 4-1 and then bounced back to beat Alaves at home last weekend 1-0. They currently sit sixth in the league on 47 points, 2 behind Real :poop:. They have only scored 29 goals this season, 11 less than Sevilla, but have found ways to get results having the highest point total for goals scored in any European competition.

La Real’s main man, Oyarzabal, will be missing from this fixture as will former Sevilla player, Carlos Fernandez. Joining them on the injured list is young starlet, Ander Barrenetxea, Nais Djouahra, and Nacho Monreal.

Sevilla needs to find away to get back to their winning ways. They are at home which will help, but another defeat will really start the panic in Nervion.

La Real’s main man, Oyarzabal, will be missing from this fixture

Oh shit. I saw this news and knew that we were playing La Real this week, but I didn’t put two and two together. This could be game changing.

I’ll be watching the rest of our La Liga matches without emotion. Hoping for a 2nd place finish only for the Supercup qualification, but extremely pessimistic on that considering the circumstances.

We should be able to win this one as we perform better at home, but Sociedad are a tricky opponent and can cause an upset.

I’m hoping for the best here. The fact we are at home makes our chances better which is good. Soceidad have been up and down so not sure what to expect. We have to be careful though because on their good days they can be very capable and dangerous to play. We seen this at the start of season and even just recently again.

We still have some injuries, a few tired bodies and morale potentially hit. I’m not feeling confident about this so soon after the West Ham disappointment.

I’m at the point where I’m just praying the team and lope can step up and proves us wrong for the run in. Let’s see. Vamos!

If we do manage to win, tomorrow it´s a big signal that we are still in it, and able to fight through tough times to get the results in important games. So just that, in whatever way, would make me proud. And it would put us in a sufficient enough spot to guarantee us CL football. After tomorrow there will be two weeks time to recover and prepare for the final stretch to compete with all other teams still fighting in multiple competitions, and we will have the advantage and all the time to prepare for the clear challenges, to fight off barca, villareal and atletico, and secure 4th.

Me and the blonde about to hop in the car and head to Sevilla for the game. We are staying overnight at the team hotel, so hopefully we get to see the lads.

It’s going to be a wet and windy game, if I can keep my phone dry I’ll post pics. 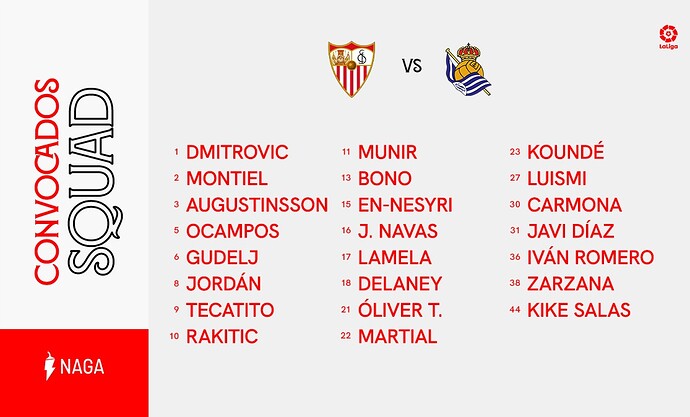 That’s about right for this last two month stretch. Have been Lopetegui’s number one fan, but this week seeing Emery convincingly take a theoretically weaker Villarreal past Juve made me have coach envy.

Would be silly to drop Lopetegui unless the locker room starts to fall apart and players show up on Twitter talking shit. Hoping we can keep things together so that next year he can get a fresh start for “cosas chingonas”.

OMG. You heard it here first, goal from Lamela in the second half. Pumped to have him back. Our lack of goal recently has made the games nearly unwatchable

Have fun! Hope you stay dry and can post a bunch of pics. 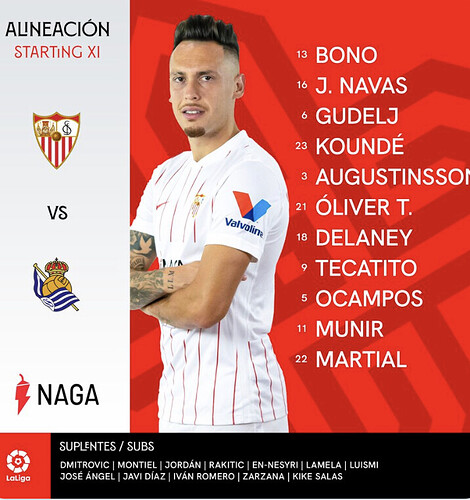 Great to see lamela on the bench. Looks like lope has run out of patience with yen, time for martial to come good. Just hoping the rain gives us a break for the next couple of hours.

This lineup is interesting. A double pivot of Torres & Delaney, Jordan & Rakitic on the bench… love to see it.

Something happened to Bono? 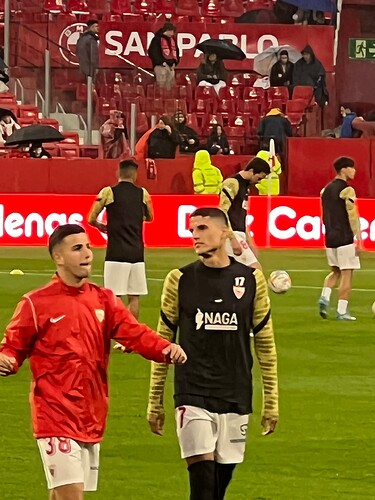 Something happened to Bono?

We still can’t catch a break, huh? Dmitrovic subs in for him.

Hoping we can get the three points today.

Sociedad is always a tricky game and they’ll fancy playing us right now, but I’ll back us with our home form to bounce back from the disappointment of Thursday.