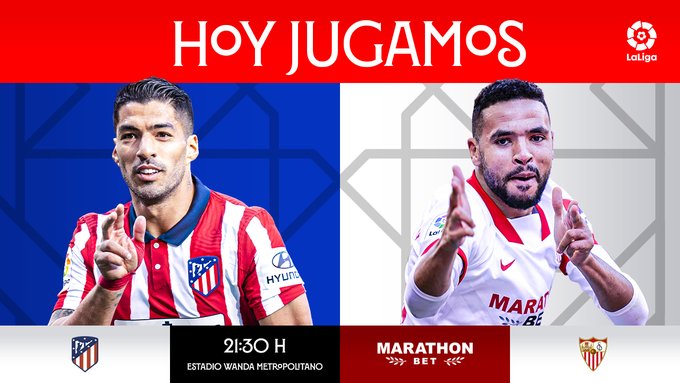 The rescheduled match from Matchday 1 between Atlético & Sevilla will finally take place at the Wanda Metropolitano on Tuesday evening.

The team’s flight had been delayed 2 hours, but they finally made the trip to Madrid and landed safely. The following 23-man squad list was released: 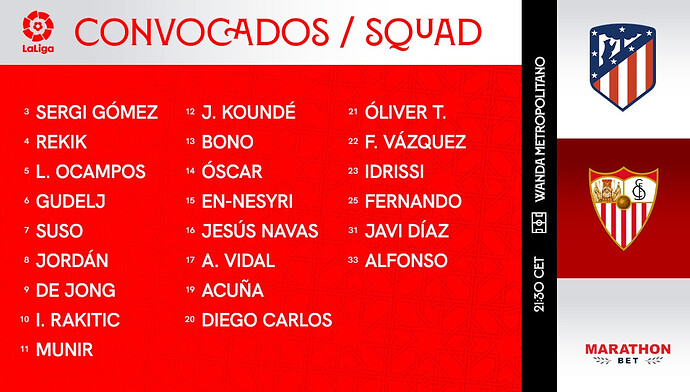 It seems Lopetegui’s team is finally starting to click with an impressive display against La Real on the weekend. Although not at its defensive best, Sevilla showed themselves to be superior over their rivals, with standout performances across the pitch. So impressed was the Sevilla board that they extended Lopetegui’s contract by another 2 years until 2024.

Lopetegui: “The fact the club decided to continue together to grow and reach ambitious goals fills me with responsibility and pride.”

It may have taken half a season, but Sevilla has seemingly broken new ground with their attacking trio. En-Nesyri is staking his claim as Sevilla’s star centre-forward, after scoring a hat-trick on Saturday. Suso & Ocampos have yet to recapture their scoring touches of previous seasons, but are showing signs of establishing themselves in their roles.

Now enters an interesting matchup to see how much this Sevilla has grown since the last time both teams have squared off. Simeone’s Altético currently sits top of the league table, with its habitually strong defensive record and a reinforced forward line. Having made the switch from Barcelona, Luis Suárez may just be the perfect piece for Atlético to validate those title ambitions.

We have seen stalemates in both matches last season. Both coaches have formed a reputation centred around the defensive capabilities of their respective teams. But will this fixture attempt to unravel their attacking potential or revert to the means?

This is going to be a tough match. I’m sure Simeone would be happy with a draw, while Sevilla need to win to gain positions and try to compete for the title.

though the Andalusian side has not won a league game against Atlético (12-2-1, 38 points) in Madrid since 2008. - https://www.intothecalderon.com/2021/1/11/22225376/diego-simeone-julen-lopetegui-atletico-madrid-sevilla-snowstorm-filomena-laliga-preview

So weird seeing snow, never mind that much of it, in Madrid.

Let’s do this tonight lads.

I was thinking we’ll face them in RSP all the time - glad that they got rid of the snow.

Such a shame I won’t be able to watch this one. It’s going to be hard, we’ll see what happens. 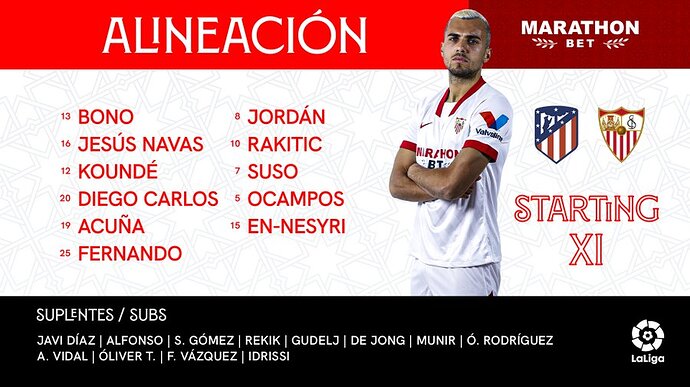 White kit, guess the Navy has been binned off entirely after the Athletic Bilbao game.

Make it or break it match, to get to the top dog spots. Having some games in hand but still lets not talk ahead. I’m feeling good about it tonight. But I really expect a game of slow chess instead. Hope we are fighting for everything and surprise La Liga script here.

It will definitely be a close game.

Navas’ hammy will be something to watch. I can’t believe he is starting this match.

Should be a close game, but what happened against Sociedad? was it Sociedad that opened up to go for it, or was it Sevilla? Great tactic to let Fernando go rampaging up front, maybe we’re developing. Tonight will reveal more.

Not gonna lie guys, not too confident on getting a result in this game, although I wouldn’t rule out getting a point. My prediction: Atletico Madrid 2 Sevilla 1

I’m never confident in any game, but tonight it’s like the official odds, Atletico 2-1, Sevilla 4-1, Draw 3-1. Can’t argue with the betting houses.

Hopefully YEN’s recent success will draw some attention away from Ocampos and allow him to get going. VAMOS!!!

I will go 1-2 Sevilla. En-Nesyri and Fernando to score.

Wahay, I’m with you.

Sevilla started well but now Atletico are asking the questions

I can’t stand this Andrea Orlandi on La Liga TV. Bloke chats absolute shit everytime he is on.

Couple of times we have played the ball up, balls we should be aiming for YEN or Ocampos, yet it is little Suso up there who isn’t going to hold it up.

Why is YEN playing wide? He just kicked that ball anywhere without looking for our men.

Suso and Ocampos close to having a great little partnership. Just not yet with the silent communication needed.

Suso and Ocampos loading that right side right off the bat. YEN playing more out to the left.