Sevilla FC host their Andalucian rivals, Cádiz, today after a bounce-back win against Levante in Valencia last Thursday. Sevilla received an outstanding performance from Tecatitio (2 goals) and Ocampos (2 assists) as well as a thundering header from Kounde to win it.

With only five matches left in the season, the players and Lopetegui are calling each match a final as they try to finish second in the league for the first time since 1951. Sevilla is currently tied on points with Barcelona in second place; however, Barcelona holds the tiebreaker.

Some good news in the Sevilla camp as Suso has returned to training after missing 19 league matches. He isn’t fit enough yet to make the game-day squad. Martial, Rekik, Fernando, and Rafa Mir will join him in the stands with the latter missing due to yellow card accumulation.

Cádiz enter the match having lost their last match last Thursday to Athletic Club just three days after pulling off the upset at the Camp Nou. Cádiz currently sits in 17th position in the La Liga table on 31 points, one ahead of Granada and six above Levante and Alaves. They are in a fight for their primera place and Lopetegui and the team are expecting a tough match.

Sevilla last played Cadiz just after the first of the year winning 0-1 with a goal by Lucas Ocampos in the 58th minute. Sevilla has now gone 4 matches without a clean sheet, their longest streak of the season.
Here is the team sheet: 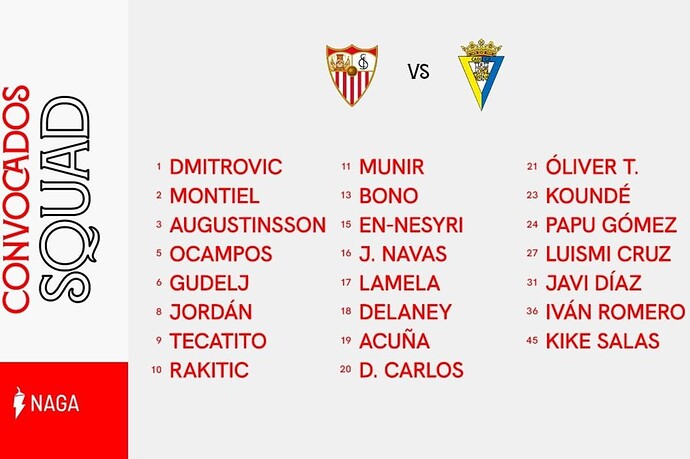 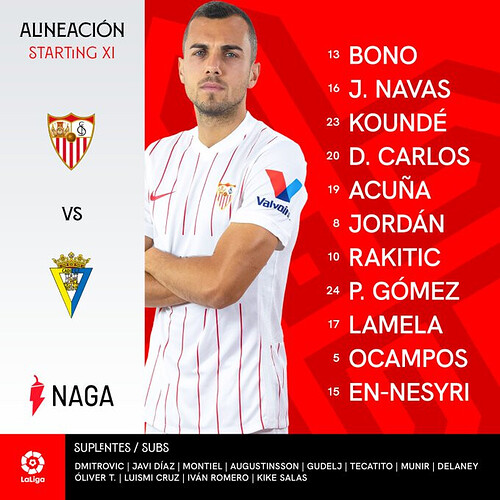 I would like to see Acuna play 90 minutes. Because he’s very solid in defence and creates a lot of chances. While Augustinsson basically is the opposite, sorry, I am not very fond of Ludwig.

Yep we need Acuña there until the job is done. Every game against low teams is a potential banana skin but I think we’ll be focussed enough. But I hate it when ex players are in the opposing team.

The defence picks itself but the big question is who will replace Rafa Mir, En-Nesyri is the obvious choice but I’d like to go with a false 9 and try Tecatito, Ocampos and Lamela as the front 3. So that would mean Jordan, Rakitic and Papu as the middle 3.

Two of the teams with the most draws in the league. At one point, Cadiz result wise was about the opposite of what we were just with the draws equal, and our wins and losses were swapped around. That´s the difference between 2nd and 17th.

Yes Espino, Sobrino, Lucas Perez, Negredo and Idrissi have gotten my attention. But we should be able to control this game fine enough. I´m hoping for a 2-0.

If we get unselfish Ocampos again, I’ll rest easy.

We are watching the game at an outside bar in Jerez. It’s MotoGP weekend here so it’s going to be wild here tonight:-)

A must-win… the same will be said on the Cadiz camp.

Important that we don’t underestimate Cadiz. Yes, on paper at home we should win, but it doesn’t always work like that. Look at Barca in recent weeks slipping up at home, indeed to Cadiz and then Rayo and Atletico only drawing against Granada.

Cadiz are fighting for their lives, it’s a derby and there are ex-players. They’re a team who can make things difficult and defensively can be quite hard to break down. It’s in the scoring goals department that they’ve struggled.

That said, if we turn up, it should be a win for us. I’m backing us for a comfortable 2-0 all being well and good. Important that we get the win with some tough fixtures still to come.

BAM! En-Nesyri back in the scoring column. Rakitic with another assist from a set-piece!

Was that really YEN’s goal?

Great start from us. Nice header from YEN. Pleased for him to get a goal. Hopefully will boost his confidence. Maybe Cadiz defence and keeper could have done better but good early goal all the same.

Nice free kick that from Rakitic and Diego

What a save that was!

Jesus, Alejo started screaming before Ocampos got to him…

Just waiting for this shitty ref to get bated into something.

YEN scored a great goal, but since then he’s been clumsy as usual. 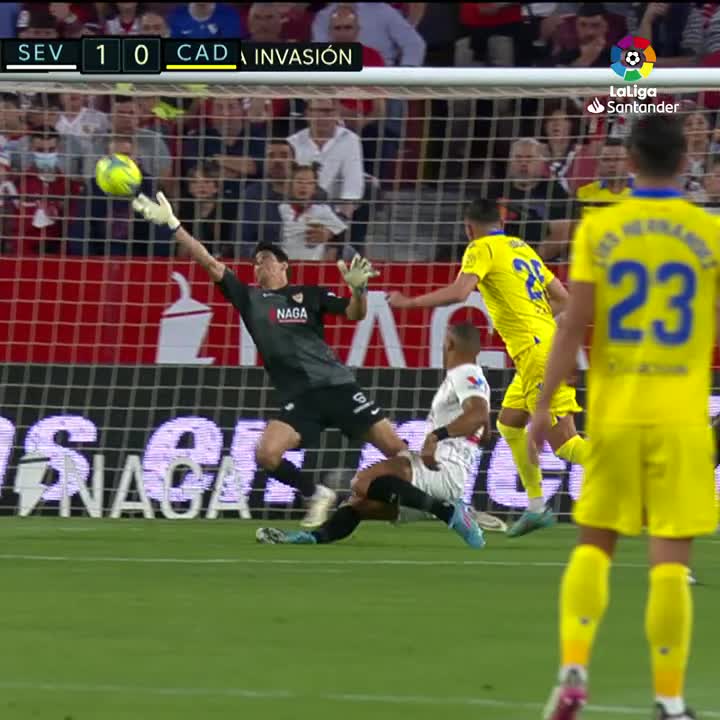 Started the game well but we dropped off and Cadiz had by far the better of the last 20 minutes. They’re unlucky to not be level and would be if it were not for Bono.

We need to step it up in the second half and get what should be a killer second goal.