With the Argentines not arriving back in Spain until late Friday probably, I doubt we see any of the three in our team. YEN still appears to be out. Carlos is suspended.

This makes it a bit tricky for Lopetegui to pick his lineup. Does Rekik fill in for Carlos and Ludwig get his debut. Do we try Gudelj or Fernando in the back? Does Oscar get a start? Does Oliver make his season debut?

Lots of questions. Y’all have any answers?

If Ludwig won’t start against Celta… then I don’t know, might as well loan him out in January.

You be quiet now.

Can’t keep them hostage any longer, it’s totally unfair to them. If Lope’s not clever enough to fit them in the lineup then we better let them go.

Oscar should be playing.

This has the makings of another slip up for us. We have a few players out and form/fitness always questionable on the back of international break. Factor in they will have one eye on the big midweek game in Lille too. I hope we can win but I guess a draw wouldn’t be a disaster for this game.

I agree, Celta for sure has the potential to beat and outplay us. Diego Carlos has been getting quite some slack here, which I don’t agree with that much. I think missing him will be problematic, and we could be torn apart by Apas, Mina and the boys, but Brais Mendez might be out possibly one less to worry about. They have been quite unlucky some games, and really dominated others.

If their naive way of playing, and shaky defense, can’t help us score some goals I don’t know what does… If they don’t do those which they normally do. We will definitely struggle. if they do? which they have been doing all games, we have only ourselves to blame again if we don’t win.

Last season against Celta, we conceded 7 goals over the two games.

We still managed to win both games but this will not be an easy game. This time, we’re doing it without Diego Carlos or Acuña. This won’t be easy at all, and we need a good result.

Also, why do Real Madrid and Atletico Madrid get to postpone their games but we have to play? I may be wrong but aren’t those games postponed because players are out?

My preferred lineup vs Celta

Hmm… Oscar as a winger and the infamous duo Rakitic - Jordan in the midfield?

I’m not exactly sure, it’s but it’s likely.

Maybe swap out either Jordan or Rakitic for Delaney.

In that I’d prefer Delaney maybe.

Acuna played 90 tonight for Argentina so his injury must be nothing. Papu didn’t make the bench. Montiel didn’t play.

Kounde is not traveling with a squad today. Gudelj - Rekik at the back probably, I’m not so confident.

I’d rather have Fernando and Rekik with Augustinsson on the left - while Delaney covers the DM spot. Gudelj is too much of a liability for that spot.

I think we will lose without kounde or carlos at back to be honest.

No CB pairing is an issue especially as some of us said in pre season we needed at least one more CB.

Jose Angel has travelled with the squad, primarily a RB I’d rather see him play than Fernando, Gudelj having to go back there.

I would bet money that it will be Fernando dropping back. Gudelj with his first start. In what minute does he pass straight back to Aspas?

In what minute does he pass straight back to Aspas 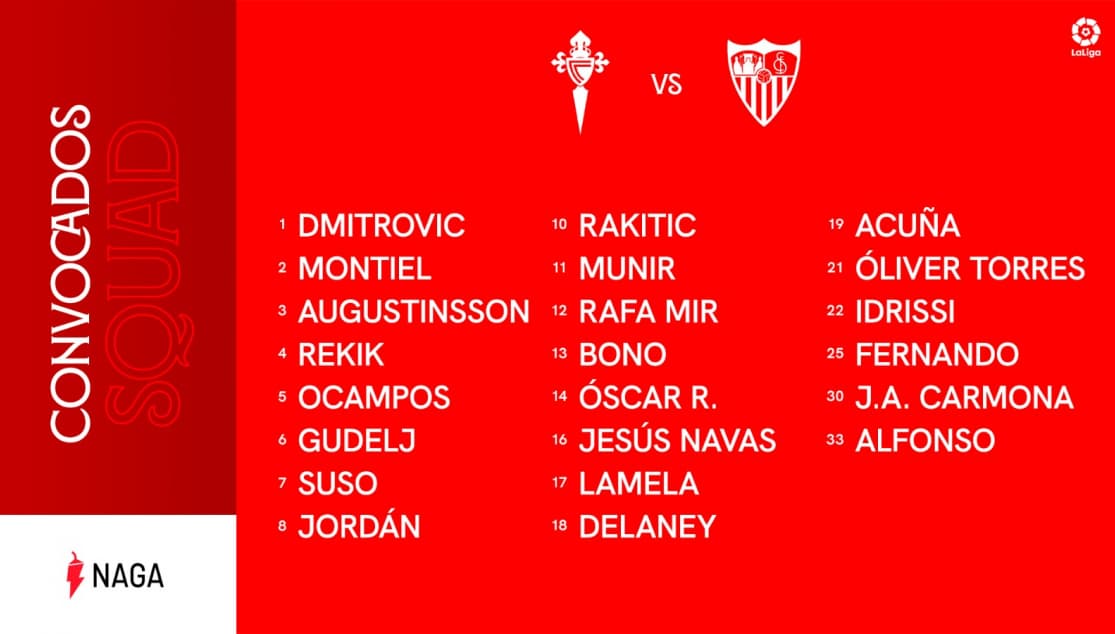