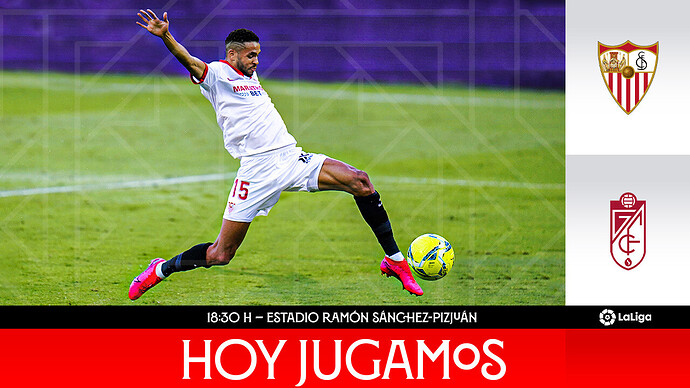 It’s the last Andalusian derby of the season, where Diego Martínez will try to finally get one over Julen Lopetegui, who’s team is putting on another impressive end-of-season run. Now with 6 wins out of the last 7 in La Liga, Sevilla are trying to capitalize on every point dropped by the three teams ahead of them.

A draw this weekend guarantees champions league football next season.

The initial objective from this season looks well within our grasp, as forward strides are being made, showcased by the resiliency of Lopetegui’s team. It seems Julen is fine-tuning our style of play, while finding the right fit for the #10 role.

This weekend has some interesting matchups and a lot can change in just a few days.

Sevilla is perhaps best placed as an outsider in the discussion of the title race. After the dropped points by Real Madrid on Saturday, we can continue to make a push to finish as high as possible on the table. However, the importance of today’s match shouldn’t be lost on anyone as our opponents still have a chance at landing in a European spot. With Kounde being a possible absentee, an already tricky encounter can prove to become complicated. Is Sevilla really built for this run-in?

I’m stoked. My first Sevilla match that I’m planning for in advance. One of Sunday league guys I play with wanted to start a little later and I said “unfortunately I have to be done by noon,” because kickoff us 1230pm here. Can’t wait.

Strange statistical quirk is that sometimes all the leading pack drop points at the same time and it’s ‘As you were’. Especially at this stage of the season. 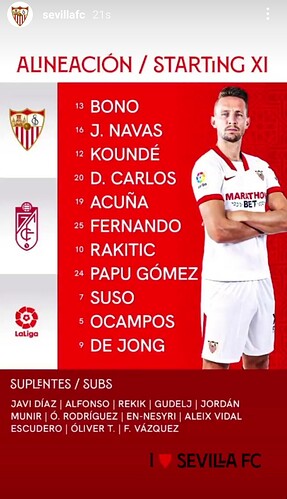 Jordan on the bench, this is a little suprise. I don’t understand why Oliver Torres isn’t getting playing time, like in the first half of the season. In last 10 or 15 games, he started just once against Elche.

I expected rotations in the last game and nothing but now 2 or 3 of our best players on the bench.

Why is LDJ starting? I hope that we at least try to feed him with crosses otherwise it will be pointless. YEN is on fire and doesn’t need to rest. Our next game will be in 8 days screw the rotations… we need to win them all!

@Biljemetropola Agreed. Poor Oscar as well, probably won’t ever start a match until the end of the season - maybe unless we screw up, secure the 4th and just play for fun in the last couple of matches.

No time for rotations now… poor decision. Let’s hope it will work.

Why is LDJ starting? I hope that we at least try to feed him with crosses otherwise it will be pointless. YEN is on fire

Yen is on the bench, we’ll work Granada hard in the first half and go for the kill with YEN in the second half an Jordan is the obvious midfield change.

That was my thought process as well when I saw De Jong. YEN for the final 30-45 with fresh legs if a goal is needed is virtually certain

Papu, this how we starting?

Granada pressing much higher and harder than I’d have guessed. They must think an early goal is their best shot to earn points.

Papu, this how we starting?

Comes on late and is great, starts and disappears after 30 minutes. Still not mobile enough for this level. Much better when opposition players are tired in second half.

Nice touch by Ocampos there

Just about got that in.

Rakitic penalty 1-0. Gonalons trips Papu and penalty without a VAR !

Unbelievable control by Ocampos there.

Hell yeah. Keep the pressure on the 3 teams at the top.