Heavy rotation on this one, practically the B team with LDJ, Munir, Rekik, Gudelj and Sergi Gomez.

Fearing a loss, but wishing for a win! 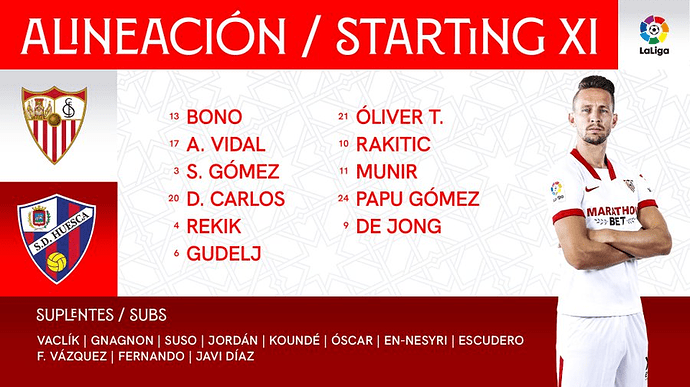 Priority is clearly Dortmund on Wednesday, but still should have enough to beat Huesca.

Let’s hope we can still get a win. I agree though we taking a risk with many changes at once. It gives an opportunity to others though and let’s hope they step up.

Understandable from lopetegui though after the tough copa match with Barca and Dortmund next week in champions league. I agree with him and it shows he trusts his squad. He’s right to rotate and we are playing the bottom club. Let’s hope we can still do the job and we can bring on the others if we are struggling. Vamos!

we can bring on the others

They will be on in the second half and we’ll just bore them to death in the first half. I reckon, first subs will be Suso YEN and Koundé plus Fernando later if there are no injury complications.

[EDIT what am I thinking, Jordan will have to come on to liven up the midfield]

We done similar when we played them in the reverse fixture didn’t we? Put out a reserve team effectively then had to bring on the first teamers to win.

I literally know two of the Huesca players, Alvaro Fernandez the keeper (who I think is very good by the way!), and Okazaki.

Yeah I agree. If we can hang in first half and even 0-0 not too bad. Then we can make the necessary changes to hopefully win the game.

I’m never happy when a team makes this many changes for a league game that we still need to win.

My view is we play the strongest possible team, get a few goals in front and then make changes from there.

Hope it works out !

I’d rather the players on the pitch do it so we don’t need to wear out our top boys. I think we will win 3-0. Munir, de Jong and Rakitic to score.

Fingers crossed! We have a lot of squad depth so I trust the boys on pitch to do a good job. Vamos!

Great play by Papu there.

And again. Rocket of a shot.

Has Luuk even touched the ball yet?

The contract between dark and bright part is eye soring.
La Liga needs to up its game on broadcasting.

It’s the shadow on the pitch. It is really messing with my astigmatism.

Man what a hell of a run, a strong run, and then to put on that strong of a shot. Too bad Oliver was just a bit too slow.

Lot’s of good stuff coming from Papu but the team still not clicking perfectly.

Only change I would make at half time is Suso on and Munir move into the middle, in place of the Statue.

What a save that was. I told you this lad in Goal for them is good.