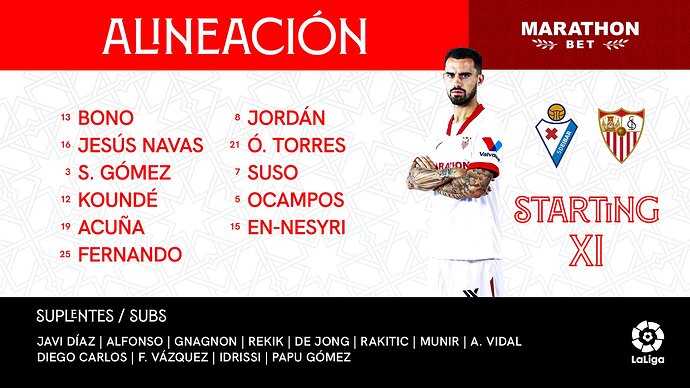 Papu Gómez makes his first matchday squad, while Diego Carlos makes his return from Covid-19. Despite their respective returns to training, Vaclík & Escudero continue to miss out. Also, Gudelj is serving a suspension, and Óscar is injured (hamstring).

It has been quite the week for Lopetegui’s Sevilla, with two great performances ending by a 3-0 scoreline, highlighting an ever-improving offense. A team that is finally coming together, has now added Serie A’s leader in assists of the past two seasons. It’s curious how the Argentine maestro will integrate in Julen’s system. But taking precedence is a tough away match against Mendilibar’s men. Will Sevilla succeed in reversing the loss suffered in October?

Let’s hope he doesn’t do himself in at this rate!

Finally we get to see Fernando flanked by Jordan and Óliver which I have been calling for, for about 3 months now.

Don’t let me down boys!

It will also be good to see how Dmitrovic, Pozo and Bryan get on playing against us.

Why Navas again, is this a joke or what? What the hell is going on?

Glad to see Oliver instead of Rakitic. It will be interesting to see where is Papu going to play, if he comes in the second half.

It will be intresting to see where is Papu going to play,

A comfortable win today and a Papu Gomez cameo would be the perfect start to the weekend.

It’s no wonder Ipurua is such a tough place to go, look how on top of the pitch the stands are. So closed in, and I always think it looks extremely dark when played in late afternoon / evening games.

At least we don’t have to worry about Gudelj coming on today. Forgot that!

O’Campos, it’s your turn to do something. I know they put two players on you every week but you can do it.

Why Navas again, is this a joke or what? What the hell is going on?

Seems that way to me too.

Fuck sake Acuña down with a hamstring injury now.

Rekik on for Acuna early. No bueno with champions coming up.

I would rather see Vidal playing left back

By the way have we heard any news on Pablo Perez lately? I didn’t think his injury was that bad, but he has missed most of this season so far.

Maybe Acuna can get some of those Navas drugs tomorrow and be back by the weekend.

Stupid foul by Dmitrovic on YEN. Interesting to see if this gets overturned.

I don’t think it will be a penalty, but still rash from the keeper.

No Penalty - probably the correct decision.