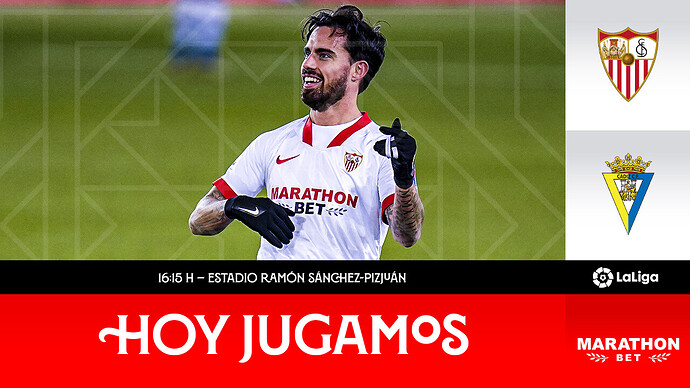 The 2nd half of the season officially begins as Sevilla hosts Andalusian rivals Cádiz, in a repeat of their opening match.

The reverse fixture was won late as super-sub Munir El Haddadi made the difference with a goal & an assist in the final 5 minutes of the game. Spearheaded by ex-Sevilla striker Negredo, who almost grabbed a goal himself in the encounter, the Yellow Submarine nearly took points away from our Rojiblancos. Cádiz has recently hit a rough patch despite having a stellar start to the season, which was marked by wins against Athletic Club (away), Real Madrid (away) & Barcelona (home). But since that December 5th victory over Barça, Cádiz has only registered 1 win in 7 league matches. Will they recover their giant-killing form at the Ramón Sánchez-Pizjuán?

As there are 4 teams from Andalusia in this LaLiga campaign, the unofficial Andalusian Cup is well under way. Sevilla still has some ground to make up on 1st-placed Granada. Here is the current rundown at the halfway mark:

In team news, Óscar Rodríguez misses his 2nd straight game due to a hamstring injury, as Diego Carlos remains in quarantine. Carlos Fernández is also dropped from the squad, this time, with a transfer likely in his near future. Finally, Sevilla Atlético striker Iván Romero has been called up to complete the 23-man squad. 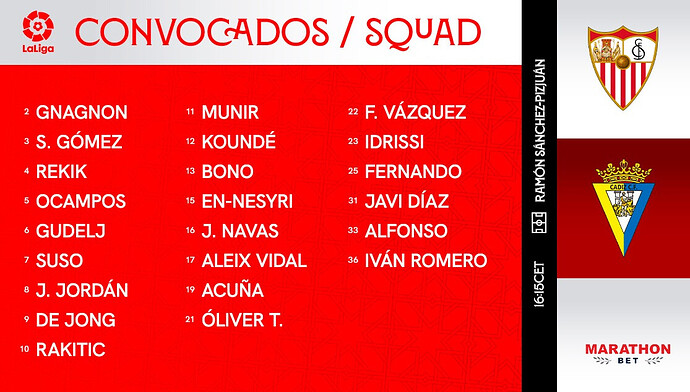 Playing at home may work better for the opposition, with the onus on Los Nervionenses to attack their rivals. Lopetegui remarked that Cádiz are “one of the best teams in the league to play without possession.” They certainly had a few threatening counters in the previous match.

While Sevilla are making forward strides, especially amongst our attackers, there are still alarming issues in the team. Bono may have spared our blushes at the Mendizorroza, but that was only after a questionable display from him and his defence in the first half. Diego Carlos’ absence was surely felt, as Sevilla still looked vulnerable in the closing stages. But most might say that is the Sevilla way. Will we ever give ourselves an easier run at obtaining 3 points?

Was talking to a fella at work who is a Cadiz fan (English), he kind of agreed with me, it is all nice and good beating the likes of Real Madrid and Barcelona for them, but it would be a lot better for them as a team if they were beating the likes of Alaves and Valladolid instead, even if a lot less glamorous.

I’m predicting this will be easier than expected and we will run out 4-0 winners, YEN x2, Ocampos and Rakitic.

Geez someone is feeling confident today. I’m going for a 2-1 win, YEN with a brace

In a few short weeks YEN has converted into one of the leading goalscorers of la liga with 8 I believe, Messi leads on 11.

Before the last game I told Suso to step up to the mark and he did.

Today I’m asking Rakitic to move up a gear. 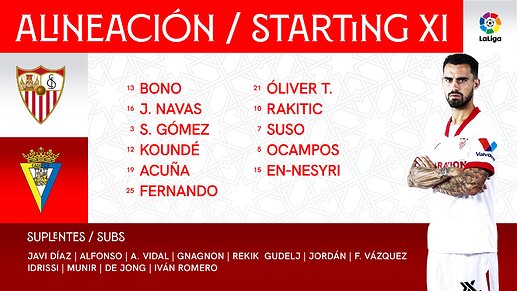 Munir seems to be somewhat of a forgotten man for most of this season so far.

Villarreal can only draw 0-0 at Huesca
A win today sees us up to 3rd, 2 points ahead of them with a game in hand.
A Barca win tomorrow puts us in 4th.

Just showed our subs in the stands, Gnagnon really looks like he doesn’t want to be there.

I seem to remember last time Cala was in RSP he robbed us with a foul on Sergio Rico, still not forgiven.

What did I just see? an attack through the centre?

Twice the referee has got in the fucking way!

Suso!!! man that guy is in form. Off the post and YEN taps it in. Woot Woot

1-0. Lovely! I didn’t celebrate at first as I half expected an offside flag, but turns out it wasn’t, but poor keeping and a tap in for the YEN.

What a finish with one eye and what a run of form that mans been on.

Decent break there, 3 v 1, why the f*** did Ocampos run right across in front of Navas ffs?!

What a finish with one eye and what a run of form that mans been on.

Man Josh, welcome back! It’s been a bit.

YEN is now tied for the league lead in goals scored. Tied with Messi and Luis Suárez with 11.

Great to be back Chris, I usually saved all my forum posts for when I was working but due to the pandemic I’ve been off for close to a year now.