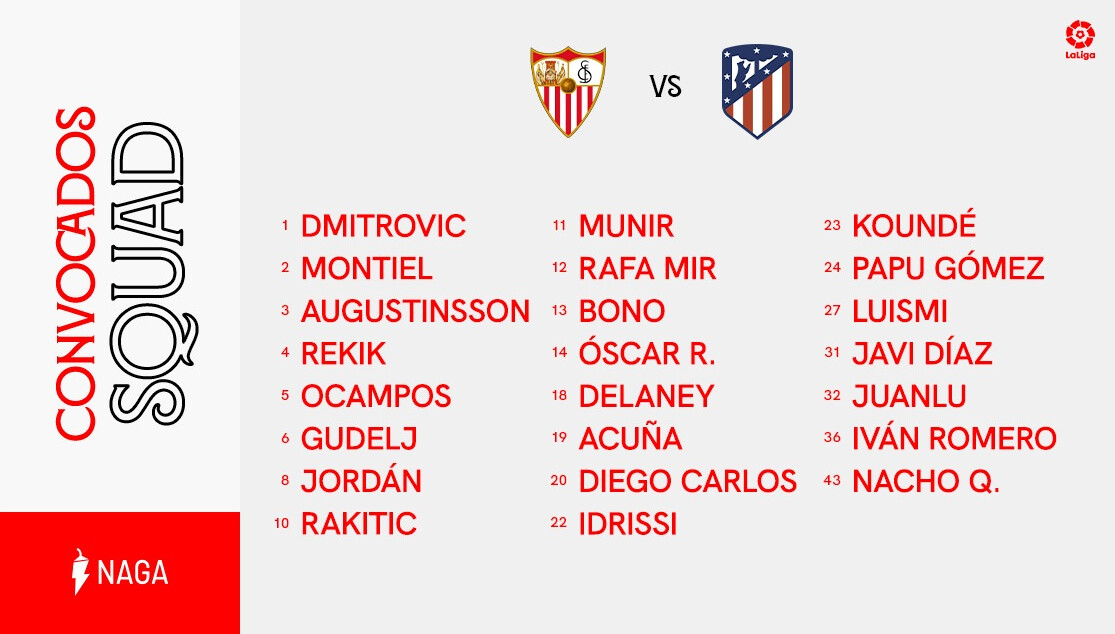 This is an opportunity to lock down 2nd spot and try keep pace as really the only potential title challenger to Real Madrid this season.

Are we serious about a podium finish this season? Are we truly the 2nd best team in Spain? Is this title chase for real? Those won’t be answered after just one match, but a test against the defending champions may show the resolve of this Sevilla team. There usually isn’t much between us & Atlético when we face off, so who will be the difference maker this time?

The best bit of news this week was the return of Acuña & Ocampos. We won’t know until the starting lineup is released, but it’s very likely they’ll both feature at the Pizjuán. En-Nesyri has also started training with the group, but will only be fit in time for the Barcelona game. Fernando is suspended for this match, while Óliver misses out through injury.

Óliver misses out through injury.

Apparently he’s in the squad, and his name is just missing from the graphic.

Obviously a tough match but I’m optimistic about our chances. We have acuna and ocampos back that will boost us. It’s a shame to lose Fernando to suspension but overall we have enough options in central midfield to cover him tonight.

Atleti have been up and down this season form wise and have some injuries to deal with themselves. Of course we still have a big attacking problem and lope needs to be braver in this aspect. However, we have been well organised this season again just like the last 2 seasons and with our strong defence gives us the chance to get a good result. It will be a close game I feel with a draw possible. I hope though we can squeeze out a win here as it would be massive to try help us finish at least 2nd this season which would be history in itself for us.

Pleased to see Delaney score last league match and play better too. He’s probably the player lope will turn to tonight to cover and play the role Fernando usually does.

Let’s see what happens. I’m excited for these games though and with Barca next too it’s an exciting couple of games for the pizjuan passionate fans to enjoy and roar on their side. Vamos Sevilla!

I think Atletico matches in general, us versus them, are for me the most exciting matches of the season. That feels like an actual Battle.

They do have some injuries indeed, especially in defense loads of strong members missing Gimenez, Savic, Vrsaljko and in attack Griezmann not there. I would like to think overall this should give us an edge. But who knows, Suarez and Correa can kill you of anytime you slip up.

A large chunk of Sevilla Atlético squad available tonight. But then they only play up the road in Linares tomorrow so probably why.

I think it will all boil down to one decisive action or ‘decision’.
A Rakitic penalty fits.
Hope Papu plays.

I have a bad feeling that Atletico will win. 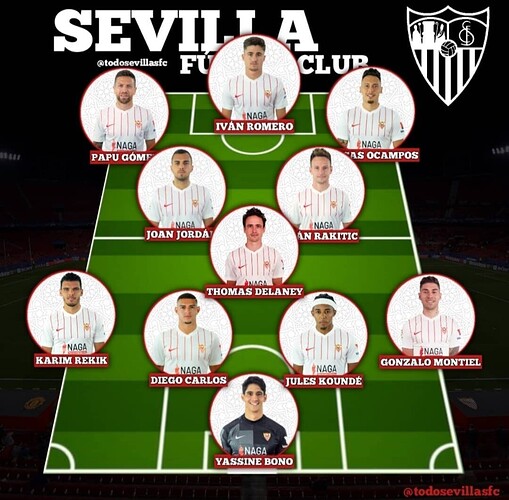 Papu plays, Rekik there in place of Acuña.

… Ivan is a surprise

Tactical, Lope wants the second half 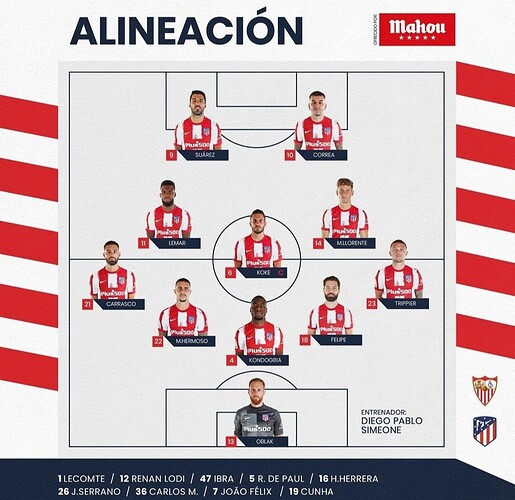 Don’t know if I’ll be able to make it, maybe will at the end of the game, but good luck today!

Surprised to see Ivan start but still what an opportunity for the young lad. I hope he makes a great impact. Good to see ocampos back. I’m ok with rekik at left back as he’s filled in there before and did well.

Let’s hope we can do a good job! Vamos sevilla!

I like the lineup. With Atletico’s injury issues, they still are able to field a really damn good lineup. Kondogbia has been awesome for them as of late.

Ivan Romero is a real surprise given he hasn’t exactly pulled up trees this season. Maybe Lope wants to save Rafa for the second half, or maybe he is carrying a slight knock?!

Rekik should be fine… I don’t mind him at LB, just weird given we still have 2 other LBs, but it is what it is.

Yeah for sure this is a real game for him, good luck Ivan.

Nice to see Romero getting a start. I like the line up, good to see Lope changing things around a bit.

Should be a cracking game. Vamos Sevilla!

Atletico is one of those team I always love beating, but hate playing. They have traditionally been rough and a tad bit dirty in their play. I am sure that is why Suarez has transitioned from Barca so easily. Bitey McBiteface fits right in.

We really need to play hard here and get some points. Even a tie at this point and RM starts running away with the title. I know the leadership has a long term plan of staying in the top 4 and moving up over time, but man do I want a title this year. Especially when we are so close to the top.