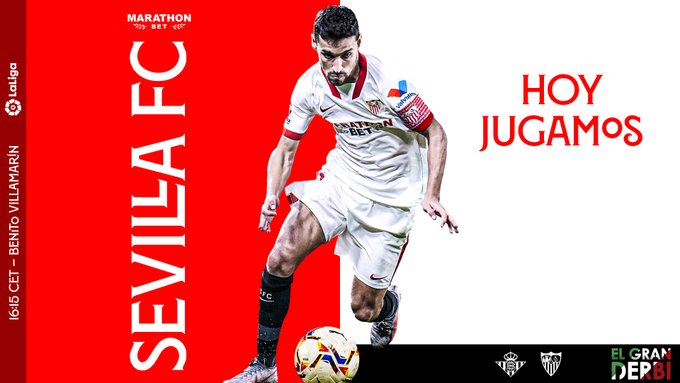 Monchi: “Betis is my rival. But my enemy is the virus.”

It’s derby day. But it’s also a match that was at risk of not being played. Four Betis players — Álex Moreno, Montoya, Guardado and Joaquín — had tested positive for Covid only a few days ago. Training had been cancelled, while results were being assessed for a supplementary test to see if the virus had spread to other players. In addition to having five players injured, the squad set up to face Sevilla is certainly depleted. Will this serve the Verdiblancos with some extra motivation?

We can’t be a serious team and not beat this pathetic Betis.

In the red corner, back to a habit of winning ways, Sevilla is looking to start a new year in similar fashion as it ended the last. Both derbies last season were won by the Nervión side, as Lopetegui looks at a new challenger in Pellegrini, in a battle of ex-Madrid coaches. In terms of personnel, Vaclík & Escudero are out with long term injuries, Fernando is suspended, while Carlos Fernández is dropped from the matchday squad. 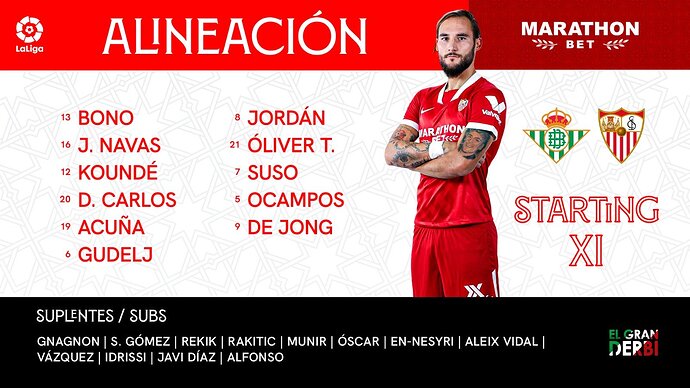 After favourable results against Valencia & Villarreal, it would be a shame to drop points to the league’s worst defence. Perhaps this is just what Sevilla needs to increase their goal tally. But as everyone knows, you can forget all about form and the league table when it comes to derbies. This upcoming clash at the Benito Villamarín can be the perfect kickstarter to a new year of promise.

@ChrisLail can you ban this user please?

Nothing other than 3 points would satisfy us in this one. We can’t be a serious team and not beat this pathetic Betis.

can you ban this user please?

Predictions anyone? I think a narrow 1-2 win for us. Also, is Surrey Sevilla legally allowed to say that here

Also, is Surrey Sevilla legally allowed to say that here

By a mutant broccoli Spinach

This is the only game of the season that Betis have to win to satisfy their fans, if Sevilla are clever they can use that angst against Betis. But Sevilla will play their normal game.

Predictions for the Starting XI?
With Fernando out, we’re due for another Gudelj Masterclass
My prediction

Time for Lope to show some guts and play some attacking football (yes i know it won’t happen but still…)
This Betis defense is the worst in the league.

Betis have been dreadful still this season. They got smashed by Levante the other day, 4-3 looks close but it was 4-1 and Levante fell asleep for the last 15 minutes.

Kudos to Chris for listing the kick-off time for HK, this is a time I can afford; the 0400 ones are really off-limits

, if this were the premier league they would apply for a postponement but I guess Betis or La Liga want this to go ahead.

Sevilla’s instagram posted the highlights from last season’s encounters and Ocampos played a key role in both matches, perfect timing given his upturn in the form in the last few games. His performance will be key to if the game goes for or against Sevilla’s wishes.

Both sides will be fired up and with Fernando suspended Fekir should be able to find some spaces, I’m going for a 2-1 here.

It’s now 4 down for Covid and 5 more injured for Betis Booo, amongst those Tello. They don’t really have much room to manoevre with sustitutions, Sevilla should play their normal game, I think.

Betis Booo have been quite high scoring but in defence 30 goals against while Sevilla only 10.

Match preview is up 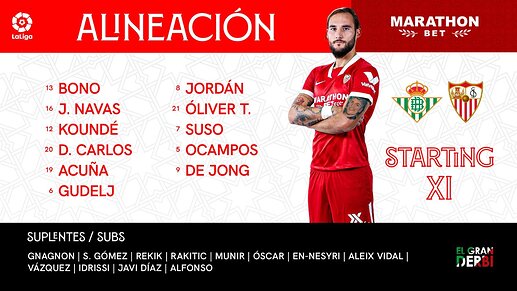