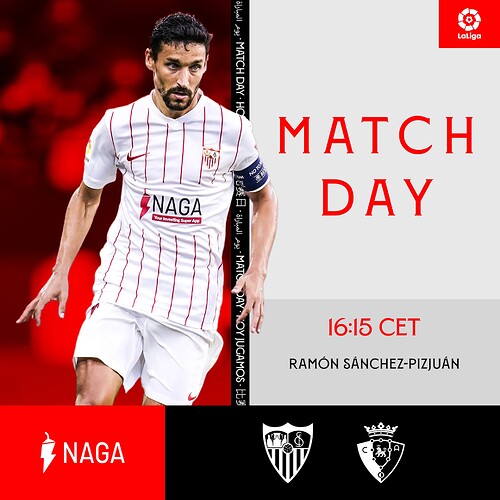 Going into this match, we understand that Sevilla is a different side when playing at the Ramón Sánchez Pizjuán. We have yet to see a good performance on the road, so we must rely on these home games to see the team’s best. This will perhaps be the toughest opponent we’ve hosted so far this season. Despite the dropped points, we’re still keeping pace with the contenders. But we are still waiting for the consistency in our football to warrant a title challenge.

It’s Champions League week, so it’s possible to see some rotation ahead of an important group match. Lopetegui has also played varying lineups in the 4 wins at home. Rekik & Papu Gómez continue to miss out, while En-Nesyri makes his return to the squad. However, the big question is whether Lamela has finally done enough to earn a start. The Argentine is Sevilla’s top goalscorer (4), alongside Rafa Mir.

Will Lopetegui make changes to the starting XI? 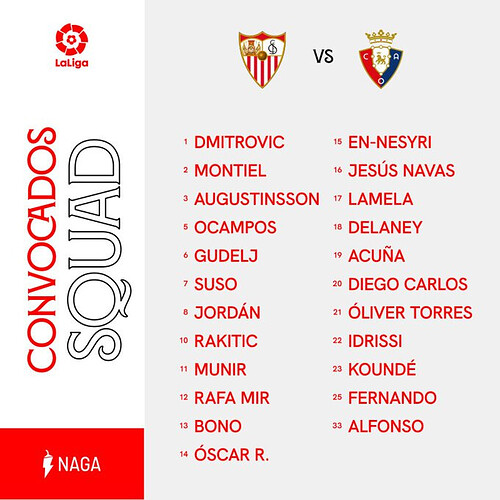 No Rekik or Papu.

Idrissi in a squad for first time in ages or am I imagining that?

I think we will see some minor changes depending on how the wind blew this morning in Lope’s office. And how he’s approaching the midfield and the wings. It’s really hard to Justify Ocampos or Rakitic, Jordan starting, but at the same time, I can see him do it. He has these things where he does the expected unexpected. Altho normally he will keep Oliver and Munir in there would be my assumption. Nesyri is back, from the start? Even if 100% I still think it’s fair to Rafa to give him the start and sub/add Youssef later depending on how its looking during the game. I still wanna see them play together up front. Same with Lamela, Lope just loves to have his company on the bench for emergencies.

Yeah very likely, that one, and either Munir for Ocampos, and Delaney/Jordan for Rakitic. That’d be it.

We have a massive week coming up. This match alongside a must win champions home match with Lille and the big derby at

which is even bigger than normal due to current positions of both clubs in table.

This week will tell us a lot in terms of how we can handle the pressure in big moments and playing especially two la liga sides who are in good form currently.

I honestly believe lamela deserves a start for his performances. I would start him but lopetegui seems to think he’s more effective at being a sub to change the game when other team gets a bit tired and game gets more stretched.

I don’t want to see the 3 Dms employed here especially at home. To be honest I’d be happy with a similar midfield to the game against levante. The trio of Fernando, Delaney and Oliver is a better balance and there’s more pace and energy in that central midfield. I’d like to see Oscar get more minutes as he can be more creative for us going forward but we will see. I think for home games Oscar could be very important to us.

I do agree that currently we should probably have rakitic and Jordan on bench but it wouldn’t surprise me if he starts one again to keep that conservative approach a bit. As we know lope will still lope at times. As for the wingers I’d prefer lamela and ocampos to start. Still Suso has did decent especially on the home games and lope does seem to like to start with him. I guess he likes the fact he hardly wastes the ball but I feel lamela is more explosive and can change a game more with direct play, skill and pace. He also has a better strike on him as we seen midweek.

As for the back well hopefully we have Kounde, Carlos and Bono healthy and starting. It’s the full backs I’m concerned about. I feel navas needs a rest and lope should try to use montiel more. Montiel is young and very talented and we played a lot of games already with another big one coming Tuesday. Navas is 35 and probably shouldn’t be playing this much. The same for the left back position. I’m not sure if acuna is fully fit as seen against Mallorca so I feel ludwig should get the start and he was impressive against levante.

It still too soon to start YEN after his long hamstring injury but good to see him back in squad. If he makes bench he may get some minutes if not we don’t need to risk him till maybe

away or after international break.

It will be a tough one but I fancy our chances at home. Vamos Sevilla!

Edit: Actually to be honest maybe munir should continue to play. He’s been impressive in last few games. He has an eye for goal too. Maybe munir instead of ocampos

A question. I’ve just signed up to La Liga TV on Amazon Prime for an extra £7.99 a month.

Will the Sevilla game today be shown live? It says all the games are live but I can’t spot this one.

I usually watch on an internet stream but I’ve come across this.

Agreed, would prefer Montiel and Augustinsson as well. Ludwig has been quite good in all of his execution, atleast on the ball. Really liked what I’ve seen from him so far.

Yeah I agree completely. I think it’s good to mix it up too and give these guys more of a chance. They have proven they good enough and can add more quality to our squad. We also need to protect navas and acuna more and not overuse them. We have 4 quality full backs and should use them all a lot. This is why we built up the squad we got to help us cope with demanding schedule with league, champions league and copa del Rey to come.

Hmm. I think this might be the fact that sometimes for rights they can’t always show a la liga game live at 3:15pm on a Saturday due to rights or something. Although that was previous years I’m pretty sure this season I seen matches been shown on that channel. Hopefully it’s there but if not they tend to put other la liga matches on free sports tv. Sevilla were on there Wednesday while Barca were on the la liga tv one.

I can see most of the games in the schedule but the Sevilla vs Osasuna one isn’t currently showing. I’ll keep an eye out later on before the game.

No bother mate. I watch on la liga tv so I will let you know too. Fingers crossed we can win it.

Yes fingers crossed we can win today. Will be a tough one against a side who have started well and not lost away from home (including a good draw at Real) but I fancy us at home with our 100 per cent record to date.

I’d love to see the line up you mention, but it wouldn’t surprise me if he goes for the usual Navas and Acuna at full back and at least one of Jordan and Rakitic in midfield. Hopefully not though.

Jordan, Rakitic and Ocampos don’t merit starts with their performances this season but Lope likes them.

Yeah I feel he will do that too bro. I won’t mind Jordan or rakitic playing as long as he doesn’t start both together. Navas has been impressive in last few games and his crossing ability is sublime. Still at 35 we just need to protect him more so he doesn’t burn out or get injured.

Let’s see what happens and hope for the best!

Yeah pal, it wouldn’t be too bad if he starts one of Jordan and Rakitic, just not both. I’d like to see a lot more of Delaney, Oliver and Oscar in the midfield.

I like Navas, still class and gives us so much even at the age he is, but he does need to be rested because of that and Montiel is a perfectly capable player to come in. Same with Augustinsson coming in for Acuna as he’s done well in the games I’ve seen. Would be great to start Lamela also as surely he merits a chance. Best to start Mir as well probably as he’s earnt his spot with the goals he’s scored and YEN shouldn’t be risked until fully ready.

We’ve got new signings and he may well as well use them rather than go with the favourites and the more defensive line up. Plus we have got to rotate with the CL coming up again.

We’ll see though and fingers crossed for a win! I’ll go for 2-0.

A must win if we want to keep the title hopes up.

Jordan and Rakitic together… awesome. This mf doesn’t get it does he?

Now we have to hope that the mediocrity is just good enough to beat Osasuna, but I’m afraid it won’t be, let’s see.

Knew he would play Jordan and Rakitic together!

Great to see Montiel and Lamela get starts though.

I’m mixed on the starting lineup. Pleased to see Lamela and Montiel like @Aduk92 says.

Still it’s a very conservative midfield which is typical lope. He’s going cagey and obviously a bit fearful of osasuna good form. We will see what happens but yeah the central midfield is defensive minded and not the quickest. I’m pleased Delaney starts but with no fernando or oliver it a bit too unbalanced.

I’m still hopeful we can win this might but we will have to stay alert defensively and maybe go a bit more positive 2nd half if we struggling to break them down. Anyway Vamos sevilla!