The 2022-23 La Liga season will officially begin on 12th of August where we will face Osasuna in Estadio El Sadar (Pamplona) at 21:00 CET.

This topic will serve to discuss general La Liga stuff this season, not our matches or anything closely related to our club in particular. However, anything that goes on in the League or CDR will surely impact us as well in a way or another.

I just noticed a weird thing when looking at RM’s calendar for this season.

They will play their first 3 matches away (vs. Almeria, Celta and Espanyol) - after that, they will play 10 of their next 11 matches within Madrid (9 of them in Santiago Bernabeu).

Coincidence? I don’t think so.

Still fixing their stadium, I’m sure. I actually vaguely recall hearing that they had negotiated something on the front end with La Liga to give them time to finish some stadium crap, but that may have been last season.

In any case, we all play 19 home, 19 away. Would love to see FiveThirtyEight or someone try to run the numbers to see if order makes a difference, but I would doubt it matters much.

In that particular case, it would be about 3 months of very short distance traveling (bar the Elche away match) for RM in La Liga. That’s a big advantage and it could give them a lead early in the first half of the season right before the WC.

Not sure if y’all saw the news or not but it’s La Liga EA Sports FC now.

Just to be clear, they will still play 19 home and 19 away just like every other team in La Liga (including us). I’m talking about this specific period of the season where the only larger distance traveling of theirs will be when they play against Elche (425 km from Madrid). Others are all inside Madrid with like 20 mins bus rides to Vallecas and Getafe.

They’ll only fly for like 3 times in CL during those 2 months, 4 times in total including the Elche match. All the meanwhile the other teams will have to travel back and forth in La Liga and European competitions.

So it’s not about being home and away rather the traveling distance, climate adaptation, fatigue etc. which directly impact performance.

I guess my point is that they have to travel eventually…so I’m not convinced whether having more travel concentrated in the second half of the season makes a big difference versus having lots of travel up front or spread out more uniformly.

It’s probably worse that they have so little travel at the beginning of the season. That means that later on, they’ll be traveling more for league games at the same time they’re traveling for UCL and the Copa del Rey matches. If you factor in the fact that their international players are going to Qatar in November/December, it gets even worse.

Look at their calendar for the rest of the season (after those 10 out of 11 matches in Madrid).

Doesn’t look bad. In fact, it’s just like every other team, proportionally home/away (12 home and 12 away).

Or look at this for example. Barca will play 5 of their last 7 matches in Barcelona (4 in a row)!

Knowing the RFEF and their ties to both Barca and RM… this can’t be a coincidence.

Knowing the RFEF and their ties to both Barca and RM… this can’t be a coincidence.

but you never know with RFEF man.

If it’s a statistical coincidence, then sadly for us (and the rest of La Liga) the statistics must love Barca and especially RM.

This could be one of the most competitive la liga seasons for a while. As Barca have strengthened massively. Atleti will be stronger and I feel we will be strong again after the signings. The likes of Villarreal, :poop:, Real soceidad will be a threat and have their moments as well. They all likely will be stronger as they have strong teams, good managers and play good football.

I think it will be much tougher for Real Madrid to dominate compared to last season. In fact after Barca’s business they may win it but I see a close race and hopefully us in the mix too.

It’s going to be strange seeing Isco in a Sevilla shirt.

Took a look at Barca’s squad and damn, they are stacked on paper, but I just read in the Guardian that LaLiga blocks Barca from registering their summer transfers due to their shady ‘financial gains’.

Also, MSN is back, stumbled across a PSG game and saw Messi Neymar and Sarabia as the attacking force. Who would’ve thought

Barca from registering their summer transfers due to their shady ‘financial gains’.

If the rumors are true, holy shit those guys are a bunch of toolbags.

All La Liga clubs must supply the central authority with information supporting their accounts. La Liga then sets a salary limit for each club based on their predicted income and outgoings for each season. Sources have told The Athletic that, after La Liga reviewed the documentation provided by Barca about their business this summer, it had a problem with the investment vehicle created to manage the arrangement with Sixth Street. The problem, the sources said, was that Barca were budgeting for a total capital gain of €667million from the two deals, while Sixth Street was initially investing €517million.

La Liga’s interpretation was that Barca were themselves putting in €150million of the club’s own money into this investment vehicle and were then taking it out again and calling it a fresh investment.

The Athletic understands La Liga has no problem with the sale of 24.5 per cent of their Barca Studios arm to Socios.com. However, La Liga’s view was that this “missing” €150million meant that Barca would need to activate a fourth lever — which would be the sale of a further 24.5 per cent share in Barca Studios to a different buyer, plus raising more money either by selling more players or cutting the salaries of existing squad members. 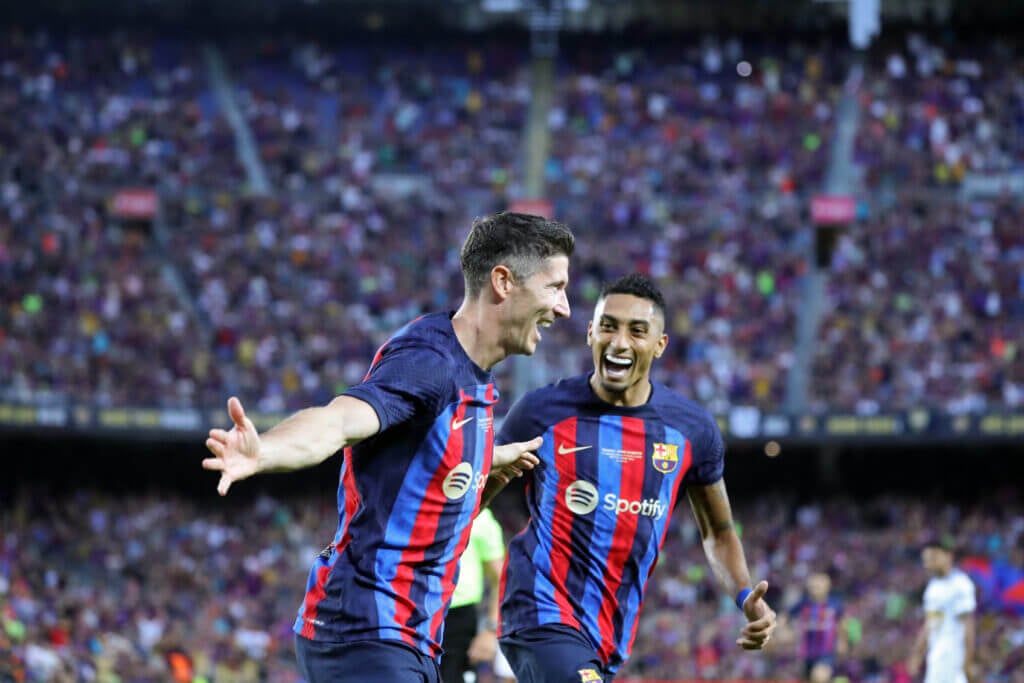 Here are a couple more rumors

Also, Zaranza went out on loan to Marítimo de Funchal, who compete in Liga NOS

Dude is tall - 6’ 4" He would tower over almost all La Liga players. Rumored to West Ham for 12 million pounds.

What are our thoughts on RDT? Scored 17 last year.