Could be a tougher game than Girona, Alavés are a spirited side and doing well in the second division. Don’t know why this game could’t have been played tomorrow, I suppose La Sociedad and Mallorca are wondering the same. Just TV money I suppose. 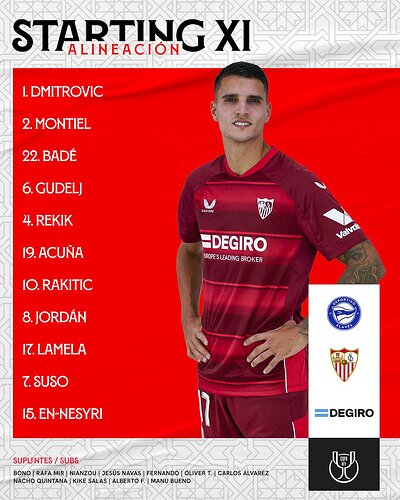 What did Suso do to earn the spot

Get there Carlos Alvarez to at least gain experience, if he can do something is great, but he can’t be worse than Suso…

What did Suso do to earn the spot

I can only think that he’s the first to be substituted and maybe Carlos Alvarez will be the replacement, though we need to break the Jordan Rakitic combo.

We’ll probably miss Fernando in the first half.

Bono could have done better in the last game so I’m OK with Dmitrovic.

At least Lamela starts, hope he’s in the game and gets the service he needs.

We’ll probably miss Fernando in the first half.

Not if he played like first half Fernando from last week.

What a tackle by En-Nesyri! Wow

That’s why I like En-Nesyri, there’s several reasons really. You don’t see Mir or any other striker that helps out that much on defense, he truly fights for the shirt. His finishing might not be the best but he always helps out defensively, his pressing is fantastic (and he also seems very happy to play here)

How are we so inaccurate with our passing?

It’s saddening to hear commentators repeat the same story of our state, game after game.

Acuna giving the ball away more than Pam Anderson gave away hepatitis.

Arguments for a red there. I think it was far enough away, but if that was given as a red, I wouldn’t complain too much.

Great save by Dimi as well.

Odds on a red being shown this match? Way things are going it seems high

We are so poor 38mins without an attempt at goal zźzzzzz

First division players but second division team, we really need ‘method’ because we don’t have it. I’m just joking, Suso doesn’t belong in any top division and neither does Jordan.

Jojo left his home somewhere in Catalonia
For some Andaluza ham

There are no words for Jordan and Suso…