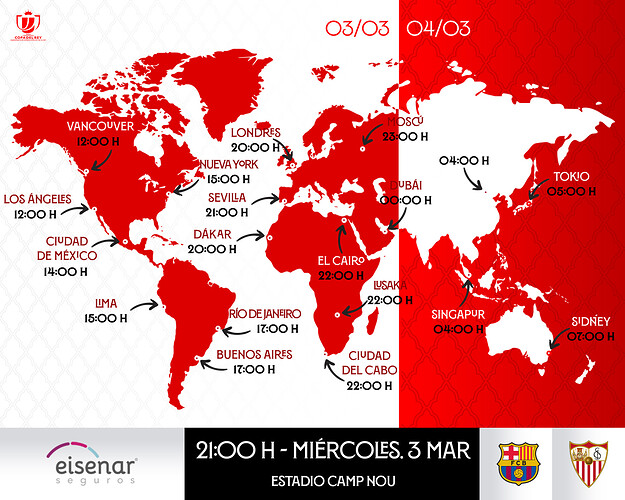 Sevilla travels to the Camp Nou for the 2nd leg of the Copa del Rey with its ENTIRE roster.

Yes, that also includes Acuña, as well as Ocampos, who has started training separately from the squad. It would be a big boost if either player were to feature. With the result from the weekend behind us, the team is completely locked in for this immense matchup.

Rakitić: “One match has nothing to do with the next. What we want to convey is that we have a tremendous dream of reaching the most beautiful match that can be played in Spain.”

Óliver Torres: “We are convinced that if we give it our all we can win against anyone.”

Lopetegui: “This game will be completely different to the other two. Football is like that and it will always be like that. That’s our mentality - we don’t look to the past to help us.”

The key should be the team’s mentality. Lopetegui has the necessary tools in this squad to get the job done. This will be a tougher Barcelona team that will give us everything. With a trip to the final at stake, it’s only right to earn that privilege with this difficult of a proposition. Will the 2-0 advantage from the 1st leg be enough to see Sevilla through?

I think we should adapt the national cup system with single leg matches from the beginning to the end. Only us and Italy from the ‘top leagues’ play two legs in the semis. It’s not that we won the first match that I’m saying this, but it would make more sense if the second leg would’ve been 1 week later (just like the previous rounds). 3 weeks however are almost 1 month and with the current schedule, a lot can happen between now and 3 weeks later, from form to injuries, fatigue etc.

So whatever happens in the first and only match should stay as it is. A return match 3 weeks later leaves nothing but more room for unrealistic comebacks because of: media pressure, team’s mood that changed after 3 weeks, possibility of referee corruption (like always) etc.

However, we have a different reality and we still have unfinished business with Barca. I won’t comment much before tonight’s match, only that I wish for us not to be humiliated and somehow go through, that would be it. Even if we lose 3-1 or 4-2 or 5-3, just do it and get to the final.

With that being said, I think we’d have much slimmer chances of reaching the final if Rakitic plays, and it’d be extremely unfair if Vidal doesn’t play. The guy was at his best, peak form and then a crippled Navas comes, playing to 50-60% of his capacity and gets his spot, only because he says so.

It’s the last time for Lope to show strong character and managing abilities by not fielding the poor performing players. I’m not even sure if Papu deserves a start tonight, but then Munir wouldn’t do us much of a favor when you think of it.

I’d go with this formation:

So it’s basically the same formation that we used to beat Barca 2-0 in the first match, only without Rakitic. If both Rakitic and Navas play, leaving Oliver and Vidal out, then it’s fingers crossed and hoping for a miracle, but it will be a painful night. One goal from us though and it could drastically change the match, but judging of how we performed vs. Barca last Saturday… scoring a goal seems like a very unachievable goal

I’m both excited and nervous for tonight. Two weeks ago I’d have said we were a shoe in for the Final, but those awful displays against Dortmund, then Saturday against Barcelona have me a little bit worried I have to be honest.

Plus Barcelona now have their little tale of woe what with having their offices raided etc. I’m in two minds whether to watch this tonight, mainly because I have to be up for work at 03:30 tomorrow morning, but also because the superstitious OCD idiot in me says we won, and won well the first leg when I couldn’t watch due to being at work, so maybe I should dodge this one too?!

I would go with:
Bono

I think we should adapt the national cup system with single leg matches from the beginning to the end. Only us and Italy from the ‘top leagues’ play two legs in the semis.

I hate the two legs (In England the League Cup still has a two legged Semi by the way!).

I also despise the Away Goals rule.

I agree with both your midfield selections. Oliver MUST play. It’s the only way we’ll be able to keep the ball. Otherwise they’ll keep pinning us back, and we’ll have to settle for Hail Marys to YEN.

I hate the two legs

I’m guessing I’m the only one that likes these?

Perhaps for a season like this one, playing 1 less game should’ve been the move. But i like two-legged semis cause it feels like a much better buildup for the final. To Shend’s point, it’d also be better in consecutive weeks instead of 3 weeks apart, but it’s just the way Spain’s scheduling is set up. It would clash with the first set of CL games.

Bono in doubt for the match after injuring one of his fingers. We’re screwed…

There is also a lot of reports on whether Ocampos and Acuna should play tonight. They are probably nowhere near being fully fit and playing tonight would only jeopardize their recovery. Totally not worth it because they won’t be able to offer anything at half (or less) of their capacity.

Anything else but the exact formation and tactics of the first match (except Oliver for Rakitic) and my faith in Lope is gone once and for all.

Well now we have to stop Barcelona shooting.

Shoot on target with Vaclik in goal, almost guaranteed to score.

The same ref is in charge as the last time we took a 2 goal lead to Barca.
He started by awarding a penalty after Messi kicked the ground tripping himself up and we lost 6-1.

I predict a penalty to Barca within the first 10 mins, D Carlos sent off and Barca to win 3-0 after we have a goal ruled out by Var in the 91st min due to Yen being off side with his big toe nail.

Shoot on target with Vaclik in goal, almost guaranteed to score.

Could we play Ocampos in goal?

I really not looking forward to this. I have a bad feeling for some reason. I may also not watch and just check the result at the end. I really never enjoy matches against Barca or Real Madrid that much.

Last time we played Barca up 2-0 in the return leg we lost 6-1. Let’s hope that doesn’t happen today.

I saw a stat somewhere that Sevilla have only knocked Barcelona out once in 2 leg ties. (there was something like 20 or more head to heads in 2 leg ties.

It’s normal that the whole squad travels to big games even if they’re not fit. The only question is if one of them is actually secretly fit so as to disrupt Barca plans.

Bono in doubt for the match

Tape that shit up Bono!

With Bono we have a Chance, with Vaclik it will be doomed. 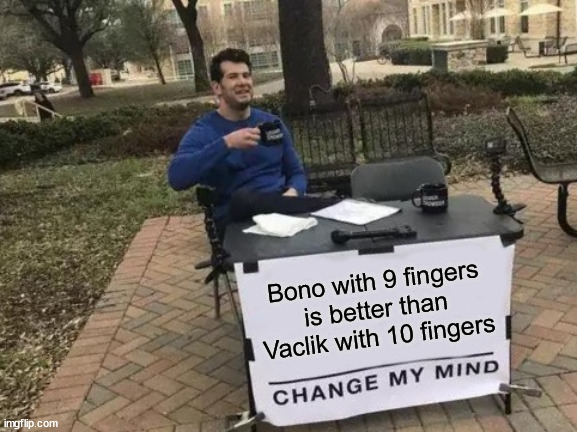 Y’all are too hard on Vacilik

I wonder why we have been unable to find a way to shut Messi down in all those years. He literally walks through our players each time he faces us.

I´ve thought that a couple of times before too. I got surprised (negatively) again soon enough, let me tell you that.