Well shit. We are back down in this tournament again. Might as well look at who we can play when they do the draw on the 13th.

The one that stands out, of course is Napoli. That’s atleast a spectacular draw were the rest of them don’t seem that fun, just like our Champions League Group phase. I’ll take the risk of getting either stomped or boost our morale by actually beating a top team over dragging it out and still possibly taking the L against those other ‘unfun’ teams.

I hope for Dinamo Zagreb, it’s the best draw and I could go to the away match, since I live close to Croatia. Also Braga and Rangers would be good for us.

I wouldn’t mind lazio. I guess the added incentive of money, trophy on line and also the fact that the final is in the RSP will make us take this seriously again with strong motivation. I’m all for us going for it provided we have the strength in depth come February. To cope with 3 competitions we need more players to come in for January due to our long term injury list.

For the firs time as a Sevilla fan, I honestly don’t care what we do in this tournament. We never really took advantage of EL triumphs and while they’ve made us known in the football world as the ‘EL experts’, it was never used as a trampoline for higher success, so we can safely say that we stagnated at the EL level for all these years.

So yeah… while it will be good to see us lift this trophy again, it will probably mean nothing in the long-term. On the contrary, it could do more harm than good because we’d get a false signal that things are working out, when in reality they aren’t and it’s just a fluke (just like the EL mini-tournament of 2019-20).

I’m feeling mixed on it too. I feel we been there done that we don’t need to push all the way for it. It will probably just hinder our process in other competitions with our lack of squad depth and mounting injuries. It feels a bit like a waste of energy and could derail better results in la liga league position, points haul and copa del Rey charge.

On the other hand though I guess the club see it as a good chance to add more money to club and a bit more prestige. The fact that it’s in our own stadium is probably driving them to give it a go as well with the money made from the local fans, etc if we make it. As well as competing with Barca and :poop: and trying to stop them.

Overall though I can take it or leave it. I can see both arguments to be made why either we should go for it or just tank it and focus on the other competitions. It depends what we do with January and how quickly our players can get over the long term injuries they have.

If we have the squad to cope then I say we should give it try but if not and I not be bothered by an early exit to maximise better chances of a higher la liga finish and better chance to win copa del Rey.

I think competitions like EL (and now Conference League) give a false sense of accomplishment and are not designed for teams with high ambitions. If we keep playing in EL and keep winning it, as hard as it can be (no competition is easy nowadays), it will not lead to progress if we constantly live with the past memories… ohh the good old days when we were the kings of EL. We need to aspire for CL and La Liga, these should be our top priorities.

Anyway, we can play with a mixed A and B team here up until the semis if we make it that far, or have the full A team play only if a strong opponent comes along before the semis. Focusing solely on La Liga won’t mean much this time around as RM are a few wins away from securing the title (not mathematically, but you know how it goes in La Liga with the refs and all), so there’s not much to get from that.

For reference and comparison, when Simeone took over Atletico in the second part of the 2011-12 season, he went all in for the EL title and won it. But he used that to build something and they won the Supercup vs. Chelsea too, and constructed a strong foundation that led them to win the title and reach the CL final two seasons after that in 2013-14. In the following season after the EL triumph however, in 2012-13, they got knocked out by Rubin Kazan (it was most likely intentional) and focused on the league (finishing 3rd) and won the CDR.

So in a sense, it’s a matter of choice and we could either focus in the league and CDR, neglecting EL, or focus in EL and the league, neglecting CDR or similar. I think we can still compete in 2 competitions, especially since we’re out of the title race, top 4 shouldn’t be too hard to maintain, although you never know with this team.

I agree with your thoughts 100%. I feel currently we can cope with 2 competitions but not 3. Unless we get our players back from injury or reinforce well in January.

I agree the title is out of reach but I’d hope we can still try to battle for 2nd or 3rd place which would be a great achievement for us and some progress in that regard. Time will tell how things unfold.

By the way, after winning the 2013-14 EL with Emery, I was quite optimistic that we’d win the 2014-15 with a bit of luck. However, I just knew that we’d win the 2015-16 edition and was telling everyone I knew in my circle that we’d win it even before the knockout stages (we went there from the CL group as 3rd), and kept the same optimism even after the 0-1 at HT vs. Liverpool. Emery had that magic that instilled confidence about the EL lol.

Not sure with Lope though. We won it in an unusual format in 2019-20 playing 4 tough matches in less than a month or so - it’s not the same this time around but we should be able to cruise through the quarters at least.

As for the draw: except for Napoli, we should be able to get past the other teams. Braga and Dinamo Zagreb should be the easiest considering their level this season.

This could also be a good opportunity for Dmitrovic to get more playing time and experience in Europe. If Lope decides to play him as the EL keeper, the condition should be to keep him for as far as we go in the competition (unless of course an injury or suspension happens). Otherwise it wouldn’t be fair to the guy. But if we go with Bono then stick with Bono and only play Dmitrovic if we have an easier game in the second leg of a certain tie.

Wow, one of the best draws possible and for sure Jakob will be glad to get the opportunity to visit them even. Great draw to move on, but as normally no guarantees. First game on homeground, 17th and second away 24th of February.

Andres Palop doing us a favour, picking the right ball

I’d say generally the level is quite high, with pairings you could see in a round of 16 CL draw even. Barca getting the most tricky one, fully hope Napoli gives them the business. :poop: and Sociedad getting comparably strong teams. Very curious to see what will happen and if we can get more into that Europa League vibe again soon.

Sevilla will play Dinamo Zagreb in the round of 16

Funny how they messed up in the CL draw, selecting wrong balls. There is uncertainty about a redraw even. Food for UEFA conspiracists xd.

Well done to Palop for sending :poop: to Russia in February.

Funny how they messed up in the CL draw, selecting wrong balls. There is uncertainty about a redraw even. Food for UEFA conspiracists xd.

Got what they required, Messi V Ronaldo = more viewers 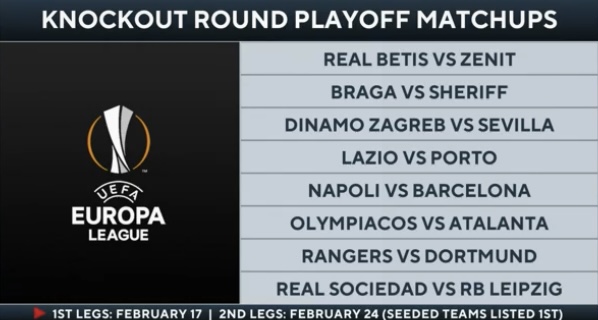 I don’t understand what happened in the Conference League group G. Beforehand on the predictions, I gave Stade Rennes my vote for winning that Cup. They won that group quite convincingly after 5 games even, and even Vitesse outperformed Spurs. But the last game got canceled, and they are not selected for the next round. You can’t get disqualified for having covid related cases no? And suddenly Spurs gets undeservedly put in that knockout draw, like what?

edit: I got it, had to do with the lay out of the tournament. Well learn something new about the Conference league. They will join in later.

Good old palop doing his old club a big favour. That is a great draw for us and especially with the injuries we still have. It’s helps us still rotate a bit and still hopefully get the job done in that tie.

Barca got a really tough one and I hope Napoli send them packing too.

The more I think about it I actually feel we played a clever game finishing 3rd. Salzburg have just drawn Liverpool in last 16 and Lille got Chelsea. It couldn’t be worse for either considering how strong the premier league currently is and these English teams money squads are. Both these English sides are in the top 5 best European clubs in the world right now.

We have drawn Dynamo Zagreb in europa league which is a great tie for us. It couldn’t be a better opportunity to try advance and allow us a bit squad rotation in the process to enable us to still do well in the other competitions.

Monchi, Castro and lopetegui are laughing their heads off right now!

In my opinion all them teams who scrapped through are out barring something miraculous. It’s like we discussed is it worth sneaking through in the long run?

We get Dynamo Zagreb in europa league haha. We lucky with the draw but we will take it. We have been cute like this before. I’m not saying we went out on purpose because we definitely tried and just weren’t good enough. You look at this situation though and to be honest I feel we better off than the others who all going out in last 16 most likely.

Secretly I feel the Sevilla board will be happy as a lot of money can be made from the 3 competitions we in and going deep in cups and also finishing as high up in la liga as possible. The added bonus of the final being in our stadium so the buzz and money to be made from that would be huge too.