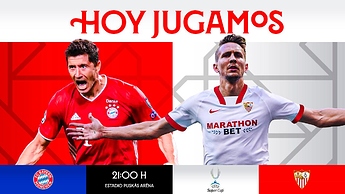 The mighty Bayern Munich has returned to the pinnacle of European football, coming off a treble-winning season, and looking to stay at the top. Their onslaught on last season’s Champions League grabbed the attention of the football world. A large part of their success can be attributed to the appointment of Hans-Dieter Flick last November, who has brought out the best of the Bavarians, especially Thomas Müller. He has proved again to be an indispensable player of many hats, who fills every gap in attack, and ultimately embodies the spirit of this team. Their recent 8-0 demolishing of Schalke makes last season look like a pre-cursor to something greater. The days of Ribéry & Robben are now gone, but the dawn of Gnabry & Sané has emerged. 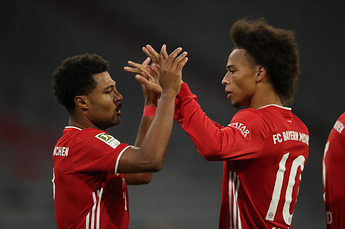 Our next challenge is upon us, and you are only granted these types of matches after achieving exploits of your own. Lopetegui’s 1st season as Sevilla manager was successful, but there is still room to grow. How he will manage this next test against the “best team in the world” will tell us more about his coaching pedigree. We have been a difficult team to beat through most of last season. Will that resoluteness once again be a precedent for the campaign to come? 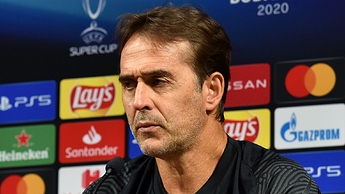 Lopetegui: "A team like this has not appeared in Europe for many years.”

If there is a way to beat Bayern, we can look at the matches against both Lyon & PSG from the Champions League. FCB gave away many chances in the early stages of both matches, and were susceptible to many counter attacks due to their relentless high press. This may force Lopetegui to start our rapid striker En-Nesyri to be the first line of defence and to exploit the space left behind the Bayern defenders. 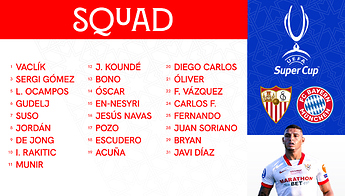 Many will agree that Éver Banega was instrumental in what was achieved last season. With the return of Ivan Rakitić, we will see the contrast of styles between the two players, but also a similar leadership role on the pitch. He has come back to Sevilla as a better, and more experienced player.

Further back, our star defensive pairing of Kounde & Diego Carlos will seek out their new challenge of containing Robert Lewandowski. After coping through many potent attacks during that Europa League run, shutting down the Polish striker would be quite the feat.

”Mentally, there are few teams that are better than us.” - Joan Jordán

Both clubs have struggled to lift the Supercup, as they both coincidentally have only 1 victory out of 5. Anything can happen in a final. The odds are heavily stacked against Sevilla, but history shows that is never enough to stop us.

Where is this going to show on tv/internet?

It will depend on your local listings. Most likely from the same provider that shows the Champions League where you are. This website has always helped me know: http://livesoccertv.com/

I won´t lie, Bayern München is looking terrifying. I am looking at this like an extended pre season. To see, how at this point, our squad compares to the top of the world. To see how we go into 2021. Rewarded or not, it doesn´t change how proud I am about last season. But ofcourse we wont say no to another bonus level, with one game, to try to win another cup.

Hope we can make it a close game, but to be fair to Bayern im expecting an asswooping. Anyway, let´s show our best and nothing less Vamoooss!

Hope Lope pulls out some trickery instead of too standard.

I am hoping we bring it to them. Bayern is a good team and favored to win, but every team is beatable. Vamos mi Sevilla!

I just hope we can give them a fight. I expect us to lose so there’s no pressure for this one. We are a good cup final team though so I expect us to play with passion and play a good match. It’s a good test just before our la liga season starts.

It will be cool to see fans in stadium even though it’s just a few. Vamos Sevilla! 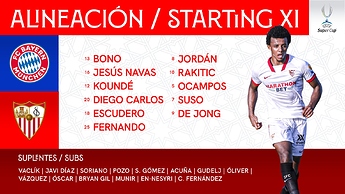 I think we have a decent chance but to me the business is already done and this is just a bit of icing on the cake, the players have another idea, they are trophy hunters and really up for it.

I would have preferred Munir and Nesyri for Suso and DeJong, in the type of first half I expect (Rakitic playing over the top for En Nesyri) We’ll have to wait and see if Acuña shows. I’ve no doubt that Raki can fill Banega’s role though he hasn’t had much time to integrate.

Bayern will have a lot of the ball, so i would have wanted En-Nesyri to do his pressing job like he did in the EL. I don’t see much of that from Luuk, but he does have a knack of scoring in big games.

Raki will try to play thru the middle more than Banega, much better for En Nesyri and perhaps a little for DeJong too.

A lot of weight on the shoulders of Bono today.

Hope the fans behave and sing like their lives were on the line.

We have a lot of options on the bench, hasn´t been this stacked in a long time. Hope we can hold it down. I can´t find it out, are we allowed to sub 5 players right? that didn´t change back to 3 as far as i know.

Not sure what to except, only that I wouldn’t want a humiliation like them vs. Barca, that I know.

He should’ve come on in the second half… perhaps a bad decision to start him for the exact reasons you mentioned, but let’s see.

Bookies have Sevilla at 7-1 Bayern at 5-4. That is a tragedy, but a good betting opportunity.

Everything pretty even here so far in the first 10 minutes. Boys are working hard pressing high. Bayern looking a bit shaky with the ball.

Vamos sevilla! Ocampos! Great football by Sevilla on lead up, and de jong did well!