Apologies if a similar thread has already been made, I couldn’t see it.

So with the Transfers market closed, what are your best/preferred line-ups from what we have now?

It’s a good question because the newbies should give Lopetegui more options.
I’ve thought about it and cant pin it down after the first five.

With Champions and liga it’s a minimum of 4000 minutes per automatic choice player and I think Lope will try to keep some players around 3000 minutes because of their age.

Papu, Oscar, Oliver, Rafa Mir and Lamela will probably get rotated all season for tactical reasons. The other great unknown is Ocampos.

I wish someone could come up will an 11 that includes Papu in a forward position.
… And just as I’m Typing this, Jesus pops in with a team.

Good stuff, We have plenty of options. Maybe I went a bit ahead since Ocampos is not fit yet, but the treat of a season 1 Ocampos I can’t pass out on. I like the idea of looking towards some sort of 4-4-2 system or at least a 2 striker system to improve our goal treat and use Rafa mir better. I personally don’t like to pin Gomez too much to a wing position. Because that’s when none of the other midfielders are willing to be available in more dangerous positions. Where I would like to see him be the one to receive it in those positions closer to our strikers.

If I’d be stuck to the 4-3-3 formation of Lope, my best one would be like Eddie’s in the other topic. 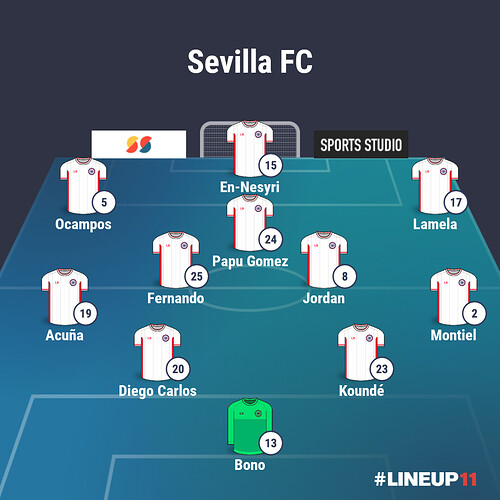 But I also tried to make an other 2 striker line up for when we need to go more ham later in the game. Or use some other players. I want to have room for the midfielder to come in deeper positions, with runs. With two striker I feel the Value of a player like Rakitic rises who will find the good ball or set up for them. Also if it’s necessary, I prefer Fernando to slot into the back (inbetween Carlos and Kounde), instead of a wingback (Navas in your example) to keep the pressure on the wings higher from our full backs, and he does it better in my opinion as well. And he can still fill the role of connector. 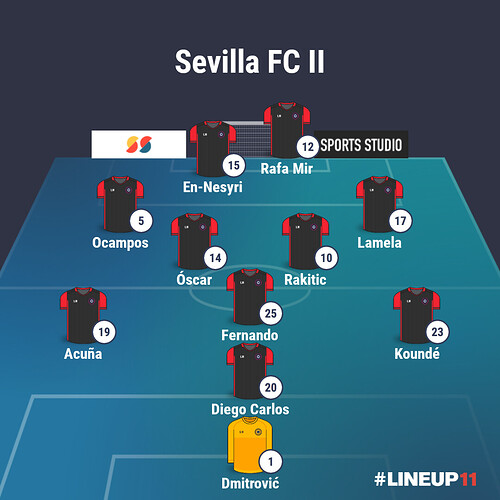 If Ocampos is fit, I would definitely like to play your first line-up. But it’s not ‘Lope’s 433’ in my opinion, because Lope plays with Fernando as a sole controlling midfielder and two box-to-box / creative players in front of him.

I read you’re first formation more as a Unai Emery throwback 4-2-3-1. Fernando has similar capabilities and rola compared to Kychowiak, Jordan is box-2-box like Iborra/N’Zonzi (not similar players and qualities, but similar roles to fill), Papu will be the creative play dictator like Banega. But that’s just how I interpret that formation.

Yes but Lope’s line up is always like that. And on the field Fernando takes the defensive position. That’s why in a formation it doesn’t matter how it’s written, but how you fill it on the pitch. In his formation pre game it’s never a one men in front of defence. In the official line up its almost always a 3 man line.Yet we all know what role Fernando is going to play. that’s why I called it Lope’s 4-3-3s line up. A 4-3-3 formation on paper, with a different touch, yes. In General, you can line up like a 4-3-3 but play like 4-4-2. What really matters is how it’s formed on the pitch. You can call it 4-2-3-1. You can play a more tight 4-3-3 and still call it 4-3-3 instead of 4-5-1. It’s just a label, that I don’t mind to much. But I put it wide, and Lope does that too. And I would like to see a bit more attacking impulse front the midfield so I put Papu Infront. Where If you have Jordan or Rakitic they often stay on one line too deep. My thought would be that Papu could be more free to help and hover both left and right for more creative combinations. So he can be really slippery for the defenders, or at least that’s my wish. You can still get the same effect, if you put it like this on paper.
Papu--------Jordan
-------Fernando-----

Man, the amount of options we will have when the squad is restored and well. It´s insane and highly competitive. Lope eventually will have a problem of luxury. But this will mean top performances expected from everybody. Unheard of in my opinion. and then there is our topscorer so far as well Rafa Mir and Martial on the left or however you want to switch it up, god damn. 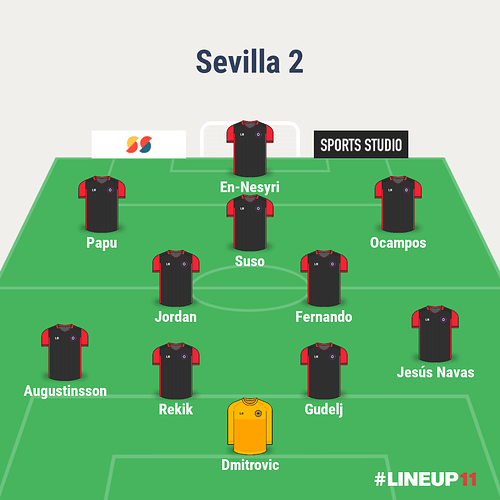 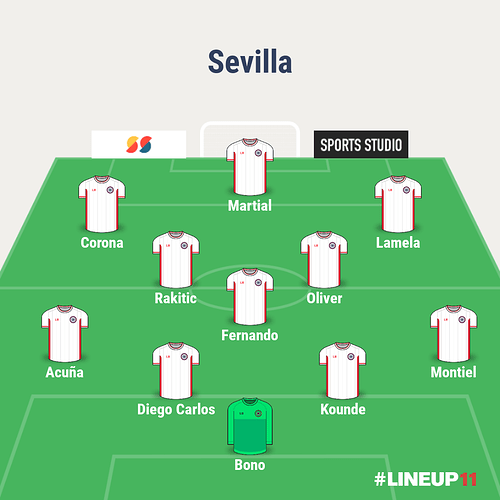 Second team would be…

You´re right, i´m even forgetting Munir and Delaney. And Papu should be in there, preferably at 10. But in Lope´s 4-3-3 I feel he will always draw him to the left. And Corona his depth and touches have already convinced me xd

There are so many ways a top player, increases team atmosphere, from respect and demand, on training level, dressing room, competitiveness. Just something changes. Only thing is how bad does Martial want to help Sevilla get results or is it to showcase Anthony and play for himself. That´s the risk with short term loan players as Shendm said coz in June he can just walk away looking for something else. But I have faith it will be good! 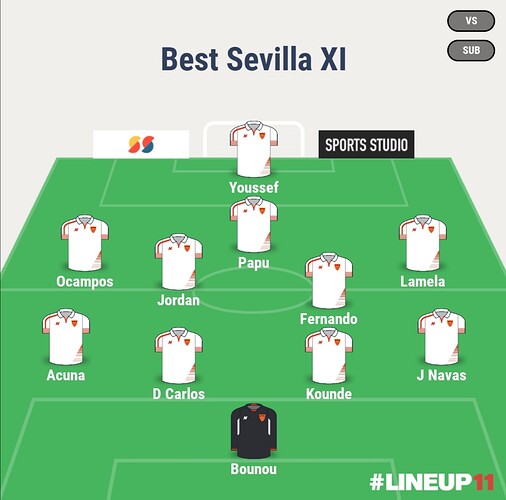 Ocampos & Lamela as wingers in a 442-ish line up would be great, I envision. Navas has to be playing, as he still is, by a mile, the one that created the most chances per 90 minutes in La Liga this season. YEN as a finisher, Papu as a shadow striker / creator. Fernando as the shield. Jordan will play like a mediator as he can do anything, defend when the team needs to defend, create when the team needs goals. Corona comes on for the least performing winger, Martial comes on for Papu to create a 442 or comes on for YEN to take over his striker position and add extra skill and speed.

Going back to a 4-4-2 type would be a blessing, I just can´t get my hopes up as long as Lope is here…

I want our strikers to work as a tandem and not just that one striker who is absolute useless in a defensive stand, unless you full pressure which is impossible. Still hoping for Umar Sadiq, Quite agile, strong and a real task for every defense, not just an end station. It will improve our hold up play as well, since we´ll have better connection points up top. Will improve our central field play, and easier for our wingers to find our strikers. Can´t wait for us to learn to play a dynamic 4-4-2 again. But it just won´t happen.

We are rusted in Lope´s 4-3-3, bought all too many players in the hope, that some will fix it but in the end the system sucks. And hardly any of them are dynamic enough to fit a 4-4-2 system, and play in their most proficient way. We get those attacking mids on the left, like Papu, Oliver, Oscar, because its to risky central, Fernando is prefered as an octopus in front of the defense. Rakitic not anymore, was excellent in the past and in Croatia in 4-4-2. Corona although can play many positions don´t think he necessarily excells in 4-4-2 either.

I think only with the workrate and versatility like Lamela, Ocampos and Jordan maybe Delaney have the potential to fit it currently.

Also if there is no unity, 4-4-2 can look absolutely useless with holes everywhere. But atleast you can still hit the ball long, and have something to play from up front.

With our current injuries, and Delaney if Fernando is still injured. I’d go with this next game. Where Martial can help Papu get depth on the left, and Papu inside. 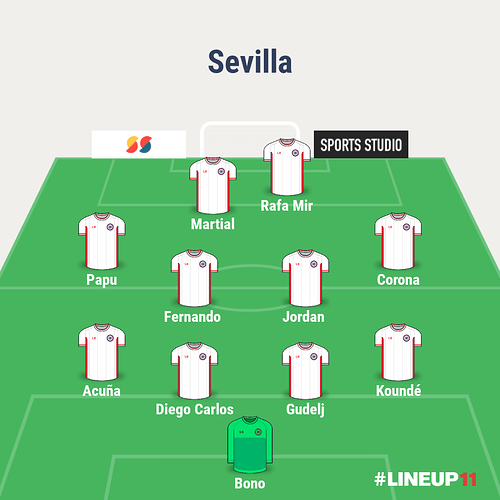 True good one, If Ocampos is fit, Corona back is probably better also for our attacking play. Getting too eager to use Gudelj ffs what´s happening.

For the season, rather than current availability, would be this for me:

To give more attacking flair and efficiency while keeping enough balance on the pitch overall.

Just read Lamela is due to return to training beginning of March.

That would be really big for us! Suso is about another month out from being back. Both of them back for the last month of the sesson could make a difference.