Sevilla resumes their Champions League campaign, after yet another poor result in the league.

This continental competition might as well serve as solace for the disappointing run of results in LaLiga. After an inexplicable 3rd straight loss, Sevilla will hope their rotten league form doesn’t spoil their good work in the group stage. The loss on the weekend didn’t materialize from a completely dismal display. Sevilla played well for large parts of that 1st half, and also during the opening 10 minutes after the interval. But for what Lopetegui usually has a grip on, his in-game management was an utter failure, and we couldn’t close out the match.

Sevilla’s focus seems to have primarily been on the midweek fixtures. No footballer will admit to thinking ahead of the match before them, but it can be assumed that, subconsciously, it is still a factor in how they perform in the league. Thankfully, it is still early in the season, and early enough to pay attention to the league table. But it cannot be helped to think that any possibility of a title challenge has more than certainly faded. The pressure of expectation may well have played a part in these losses, but it is also evident that Julen’s team hasn’t yet evolved from last season’s version.

Sevilla are still without Sergi Gómez, Suso & Idrissi. Alfonso & Zarzana have been called up from the youth team. 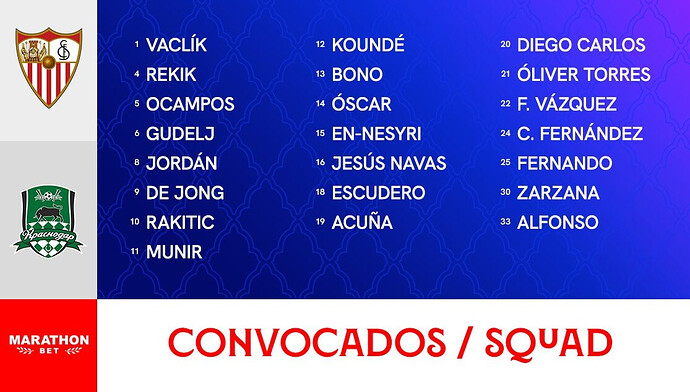 The opponent on the pitch, FC Krasnodar, is from Russia. But as what’s been the case lately, Sevilla’s only opponent are themselves and how they will overcome this bad run of form. There is no question that nothing other than a victory is expected at the RSP tonight. How that will be achieved is irrelevant as they must simply fight through this. More goals would be nice, but the squad simply needs to get back to their winning ways.

Ivan Rakitić: “We know we must improve. We will make sure it doesn’t happen again.”

He doesn’t often go with an experimental lineup but I’ve a feeling he might tonight. Perhaps searching for a new formula with more punch.

But the problem is we never seem to have a plan apart from win 1-0 and if the other buggers score we’re up shit creek without a paddle.

Biggest trouble for me is we have two very good players in Carlos and Oscar, but we don’t play the 4-2-3-1 formation that suits them as both players beat position really is that 1 behind the main striker.

Sorry that has come out weird.

Something like this? I think Ocampos needs a rest

The replacements in that system speak for themselves really. 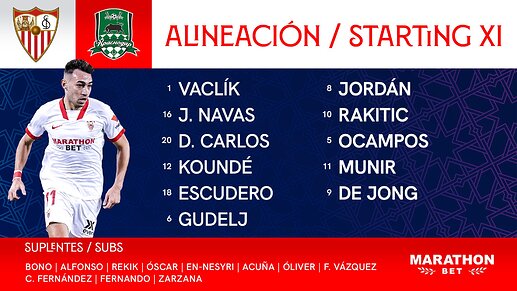 Alrighty then must win here, Line up is alright. I like Munir in there. Vamoooss

I also wouldn´t mind benching Ocampos, just from the start to trigger his will to prove himself. Now he gets angry when he didn´t accomplish much in 70 minutes.

oh wait, i didn´t see Vaclik in there at first, fingers crossed.

Please for the love of God score at least 2, preferably 3 goals.

Swedish striker Marcus Berg has a real good eye for goals and doesn´t need much. Funny to see him pop up in Krasnodar at the end of his career. Hope he doesn´t succeed tho.

Nice strike from Ocampos that needed a good save. 7’

Jordan wins a PK from a weird little foul 9’
VAR takes a peak, Ref to the monitor

No way thats a penalty.

Waived away and should have been.

Wait a handball I can see that tho… well not either. Seen that happen for a light touch but its better to not give it anyway.

Navas shot on goal - rebound to De Jong who passes back to Jordan who can’t find the touch needed for a shot in the open net.

Quick counter and Kounde picks up a yellow taking down the man on way to goal.

Freekick finds the back of the net - Vaclik doesn’t move.