So Ivan is a bit of an enigma here on the forums. Some have rated him terribly for the season, some middle of the road, and some appreciate his contributions. I thought it would be a good idea to do a deeper dive on some of our player’s seasons to put in perspective how good/bad of a season they may have had compared to other players in Europe and La Liga.

I think he had a decent season and started to perform better later. He scored in some big games this season. He needs to win more balls and press better in this scheme in my opinion. He is also pretty low on “progressive passes” which we all knew. Hopefully this offseason they can work on it. 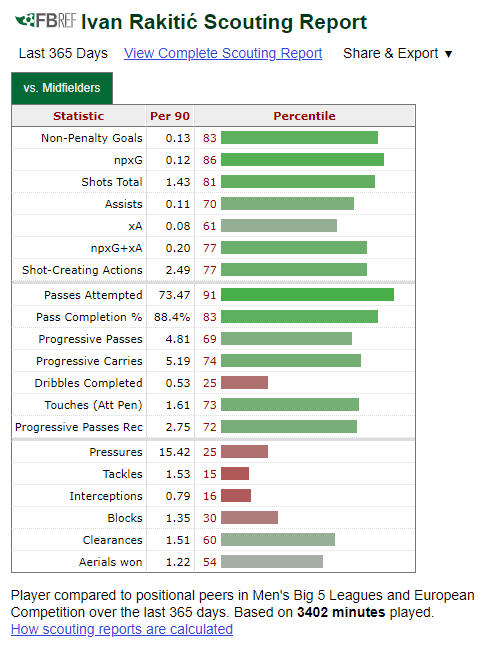 So with that, how do you rate IRak’s season?

I think a lot of the frustration among the fan community is due to the fact that we had just lost Banega. I don’t think it’s fair to compare the two as like for like, but they play similar positions, and Banega was coming off of a great year in 2019/20. It makes sense that we’d see a new midfielder and compare him to the one we just lost.

I haven’t really analyzed the game-by-game stats for Rakitic this year, but I definitely got the feeling that he became more comfortable as the season progressed. I’d rate his performance as a 5 or 6, but I’m really excited to see what he can do next year. If we can combine a complete offseason with a depth piece or two, I think things are looking up.

I can’t argue against or for stats. They are what they are. I will say I watched Rakitic play many games pre, during and after the 2018 World Cup. The same player never came back from that World Cup, imo. I don’t know if it’s mental, physical or a little of both. I gave him a 5. He’s ok. He’s not losing us games. I don’t want OK, though. I want dynamic.

Tend to agree, underwhelming at the start but decent and more active towards the end, also in pressuring plus some important goals. Maybe over all the matches some stats don’t look that positive but his end of season form I would rate better then a 6, but over the whole thing a six is fair.

We expected a lot from Rakitic at the start of the season and he didn’t deliver. He dropped from first 11, now we are playing with Fernando - Jordan - Papu in the midfield and Rakitic is very useful player from the bench. He provides expirience in the second half, he can also score goals, so I think that he can be useful rotational player next season.