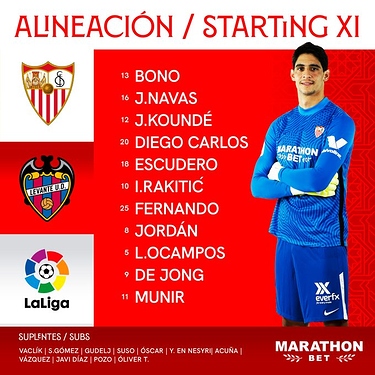 Our first match at the Ramón Sánchez Pizjuán sees us host Levante.

With the above selection, it seems Lopetegui wants to get Rakitić embedded into the team as early as possible. Munir & De Jong has earned a start after scoring off the bench away to Cádiz. Also, the tried & tested pairing of Kounde & Diego Carlos gets the go-ahead.

This will likely go much differently than the friendly a few weeks ago with a complete change in personnel. But we will hope again for the same desired result in another victory for Sevilla.

Probably our best 11. LB really the only question.

Guillem Balague said we are the best team in Spain in the build up to the game.

Ocampos wastes one. Vukevic dishing it out in fouls.

Both sides a bit accident prone. Rakitic not in the game enough. Sevilla need to stamp authority on the game.

This has been a bore fest so far.

No creativity at all. It’s one of those matches where we heavily rely on Navas, but he’s being marked out with no other reliable option to get us forward.

There were a few decent runs in the box, but nothing came of those chances. Lope is usually clutch with his subs, so i won’t be surprised if a change is made right away.

Too many errors by Jordan frankly, he telegraphed a free-kick back to Carlos who fumbled possession and provoked a dozen heart attacks. Meanwhile, Rakitic not in the game. Something wrong if Jordan gets possession and Rakitic doesn’t.

Earlier, two good moves between Escudero and Munir on the left.

I can’t honestly say any player is up to normal level, apart from Navas.

Has to be a bad sign if Rakitic can´t pull some of the play to him no? well let´s see i´m hopefull for some good subs as well, lately and end of last season subs have been very clutch for us.

Thank god they are not Barca. D Carlos would have cost us at least 2 goals by now.

Very wary of him, he was arguably in the best form of his life during the EL mini-tournament and still made fatal mistakes like the 3 penalties in a row.

Changes please or this will be a banana skin game.

Did the keeper not dive for it thinking a foul was going to be given?

Fucking foul! Whatever, that was soft.

agreed was soft, terrible clearance maybe a bit forced by arm touch but very light in this case I think. Whatever indeed, let´s score a good one.

Percentage of attacks left compared to right is showing big time. 16% to 42%.

Sevilla lack method and belief. Changes look OK but YEN still not touched the ball.
Smells of penalty or 0-0.