With the breaking news that hit last night in Sevilla from Jose Manuel Garcia that the club and Lopetegui have reached an agreement to mutually part ways after this season, Sevilla finds themselves looking at the last two matches of the Lopetegui era. The first of the two matches is against what has become a pretty good rivalry of late, Atletico Madrid.

Sevilla travel to Madrid to face Diego Simeone’s team in the Wanda Metropolitano after beating them at home back in December 2-1. Rakitic scored a laser beam goal in the 7th minute and a Lucas Ocampos volleyed home the winner in the 88th minute.

This match is one that could determine the third-place finisher of La Liga. Atletico currently sits one point ahead of Sevilla in the table in the third position. Atletico finishes up the season next week by travelling to San Sabastian to face Real Sociedad, while Sevilla finishes up at home against Athletic Bilbao.

Several members of each team will be missing in this match. Sevilla will be missing Erik Lamela who picked up his 5th yellow card on Wednesday. Fernando is of course out for the season and Suso misses out once again. For Atletico Madrid, they will be without Lodi, Thomas Lemar and Joao Felix is listed as doubtful.

Sevilla haven’t won both matches against Atletico Madrid in a season since 2009, can today be the day to break that streak?

The lineups are in and it’s a familiar one: 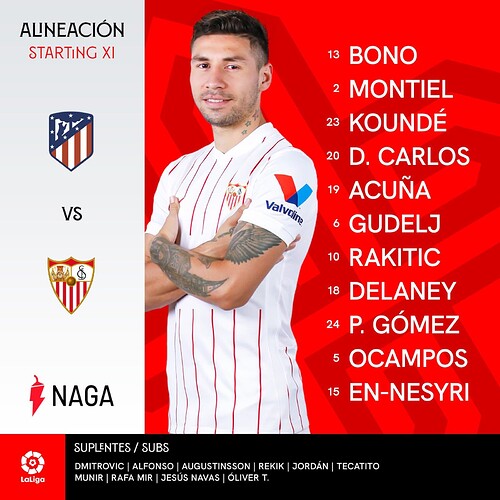 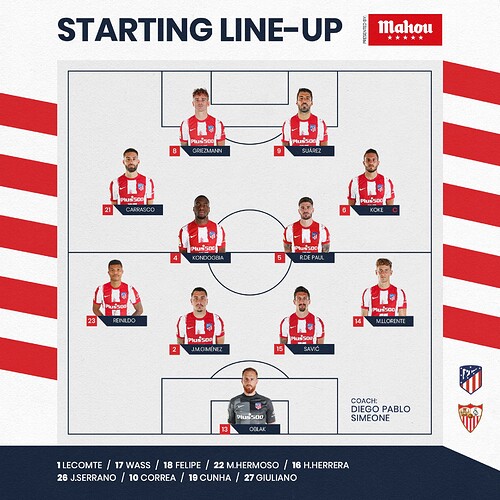 This is probably Suarez’s last home match with AM.

Midfield trio not the most nimble. This game will be a yellow card festival.
Papu and Acuña carrying injuries so Sevilla might have to resort to the bench in the first half, good to see Rekik back from injury and ready on the bench.

Gudelj will prolly trail back to form a back-3 or his version of a Libero and act as the pivot. Only thing i like about that is the potential fwd runs by Delaney. Other than that i see zero goal threat, unless Papu wants to do a cut-in special.

We usually raise our game against Atléti, but with how we’ve played in 2022, i can’t call it. 0-0 again will be just fine so we can have a stress-free last home game of the season at the Pizjuán.

Right out the gate some pretty strong physical challenges. Going to be a rough game. Hopefully not too many knocks from it.

Can’t get forward. Midfield stuck back. Not looking good so far.

Not looking good so far.

Delaney with a great pass to spring En-Nesyri and he well you can guess.

It is almost painful to watch En-Nesyri waste yet another great chance with his typical lack of balance and composure. The giraffe-like strides towards the ball before tangling up with his own legs has been the norm for his play this season.
If only we had an effective, high quality goalscorer.

And now we are 1-0 down, almost inevitably after wasting the chances we had.
YEN was just ball-watching rooted to his spot instead of running onto the ball that was coming towards him.

Montiel getting a rash yellow this early in the game.

I have an awful feeling the unthinkable might happen on last day if we lose this and :poop: win. Real Madrid are resting so many players for champions league final.

In my opinion we need a point today or next week.

Sevilla are in this game, they’ll have to do it the hard way though after conceding first, but there’s been some decent runs from Delaney and Rakitic from midfield

Failing Sevilla, lack of method, too much foreplay and not enough sex.

There’s just nothing going forward. We don’t look like scoring. It’s been the story all season.

YEN yet again misses our clearest opening and no shots on target. Now we have to score a goal against a side who once they go ahead don’t tend to let you back in. The goal we conceded was a poor one from a set piece. Too easy. I’m not holding out much hope as we struggle to score at the best of times.

To top it off, Betiss are winning and the pressure really is mounting in terms of securing the Champions League spot…

I think @TimSpence2 summed us up perfectly haha!

2 changes an YEN not one of them