Sevilla FC is coming off a great win at home in the Europa League against West Ham United and is looking to narrow the gap between first place Real Madrid and themselves.

Sevilla haven’t been in the best league form recently, although they still haven’t lost a match since November 2021 in the league. Their last 5 matches have seen them gain 9 points while only scoring 5 goals in those matches.

Rayo come into the game having lost their last five matches. They started off hot during the first part of the year, but has sank down to 14th in the table and sit 7 points above Cadiz for relegation. They have only lost 3 home games so far this season so I’m sure it will be a tight match.

Sevilla will again be without Diego Carlos, Rekik, Papu Gomes, Lamela, Suso, Montiel, and Fernando due to injury and Jordan due to suspension.

They will get Rakitic and Delaney back in the squad from the midweek Europa League game. 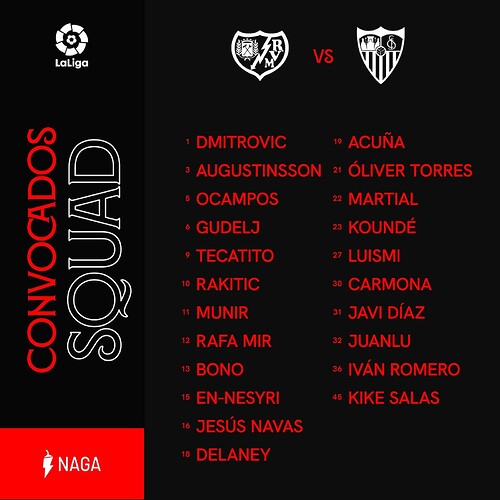 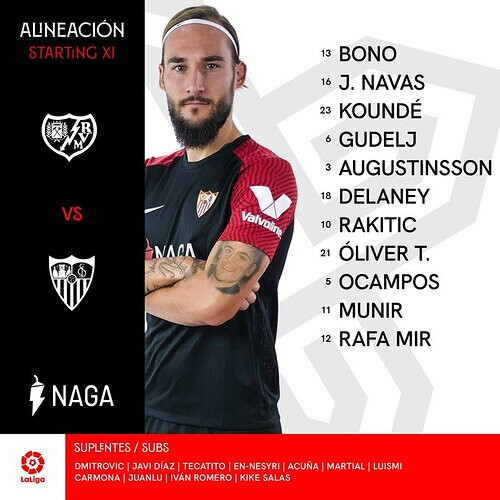 Jordan is missing due to suspension.

Oh man - missed that one. Thanks

Maybe this for the start to get some rotation with West Ham coming up again Thursday?

I’d go with that too. Maybe even rest Bono and have him fresh for Thursday. I’m sure Dmitrovic could do a good enough job vs. Rayo and he needs some minutes too.

Wouldn’t mind Munir starting but I’d like for Martial to start tomorrow - he needs to pick up his form quickly, not much left in the season.

I would rest Ocampos as well. Eventhough he didn´t play well, his contribution in effort really helps versus an English side, especially in their home pitch. And I can see him get some more good chances versus them, so a very fit and eager Lucas there, would be more valuable.

I’m sure Dmitrovic could do a good enough job vs. Rayo and he needs some minutes too.

Also he was MotM in the reverse fixture.

I’d go with that. No point in risking Bono, or Acuna.

Rayo are strong at home so it won’t be an easy game and we’re away so you never know. They’re not in good form at the moment though, so nothing more than a win will do tomorrow if we stand any chance of getting that 2nd position.

I would start YEN tomorrow and save Rafa Mir for West Ham personally if we are prioritising the EL now.

Must win match if we want any chance at the 2nd position.

We can’t afford to prioritise EL to much though. If we want a chance at 2nd we need a lot of focus on the league with Barca and atleti chasing us hard.

I tend to disagree with not starting Bono. Rayo away has been a difficult fixture, even if they are cooling down in form, this is by no means an easy match.
We should field our best 11, just make some subs so some players don’t play the full 90

If we want to win as many games as last season, we would need to win 9 out of the 11 remaining games. 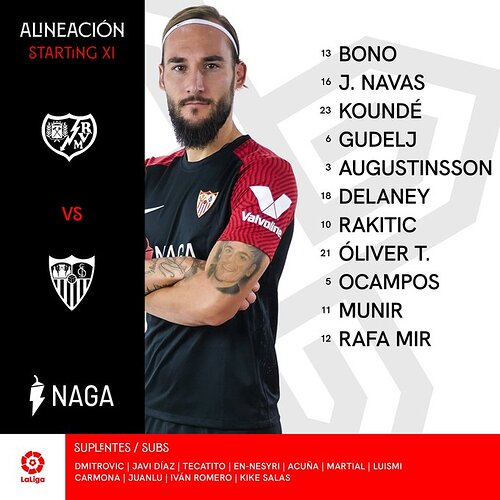 Acuna Corona & Martial rested for this.

Up early for this game. it is 0500 here. I just put one son on a plane so I might as well stay up. My lucky kid gets to hang in Sevilla for the next 6 weeks. Great time of year there too. He will be there for Semana Santa and a couple of days of Feria. So jealous.

Hoping Ocampos and Mir, connect for once.