Just wanted to start of game day with excitement for getting to see us play again, and see how the guys recovered and prepared themselves for the next series of games that could lead to something potentially historic. Without getting to hyped up ofcourse, since the road is long and full of uncertainties still. Although our squad has gotten back to around 20 first squad players, where some weeks ago we were sitting around 12-13 (not even all fit either) so we are somewhat recovered and got some options back besides some additions. I am convinced Martial will get his first minutes (25-30mins or so), either to ride the flow if we are doing well and get rhythm, or force something towards the end in desperation and get the debut over with so that’s another exciting thing to look out for. We know what we need to fight for, which in the Celta game we really showed some unexpected (at that time) character to turn around a difficult situation so this definitely adds to the hope for something special especially with every team being beatable by many. And not even Real is safe from failure.

Osasuna was really tearing it up some games before but have been dropping down again with multiple tough losses. I still see them as a tough team, who don’t roll over for nobody, and almost always keep games in close distances. Always fun to see Avila or Kike/Budimir and see how we keep him in check and Lucas Torro who we’ve been rumoured with as well, one of their best players.

It will be a difficult game. Going to Pamplona is never easy. Let’s hope all the squad have comeback healthy and ready for the battle tonight. It’s nice to have lopetegui back in the dugout as well. It will be tough to win this but hoping we can eek out a hard fought victory. Vamos!

It will be a difficult game. Going to Pamplona is never easy 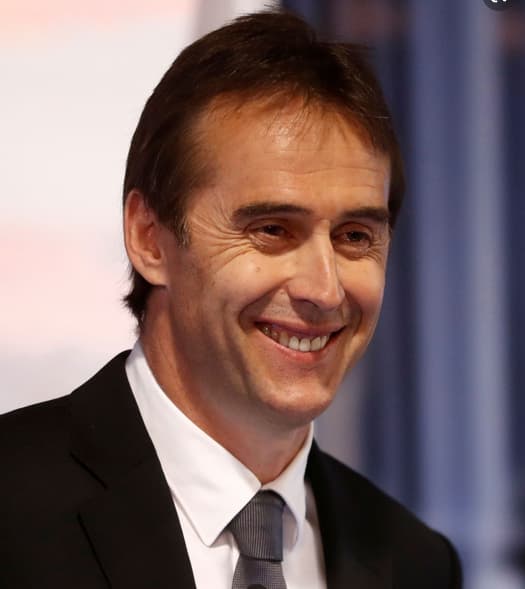 Lope would love me haha. I dance to his tune on the difficult match speech. Classic photo pal. Proper cheesy lope smile if ever there was one

Cannot wait for tonight, feels like ages since we last played.

Bono in goal.
Martial and YEN start, Koundé on the bench along with Rafa Mir and Tecatito.
Rekik and Diego Carlos start in centre defence.
Gudelj Oliver and Jordan in the midfield. 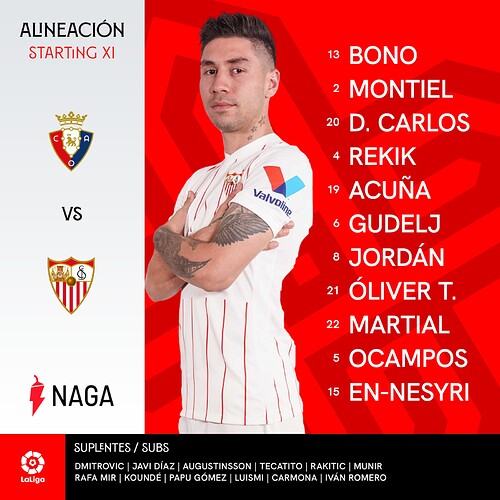 Really? LOL I don’t know, it’s the app of my Mrs that got the team sheet first. I’m still waiting.

Wow no slow start for Martial, Lope directly throwing him in there! even more exciting!

Pity that Fernando isn’t even on the bench, I thought he’d recovered.

Interesting lineup. Lots of new faces either making their debut or we welcoming back after a long time.

It’s a shame we have no kounde for this but overall an exciting lineup. Let’s do this. Vamos!

It’s a very attack minded team tonight. Good to see this from lope. Hopefully we don’t play to open though and keep our defensive core strength going. Lots of exciting attacking options though. Let’s see how it goes

Is Kounde carrying a knock then?

Line up really good for counters and quick transitions from defense but for playing from possesion and finding small spaces and combinations I think missing Papu, Tecatito, Rakitic might be a big miss. Jordan and Oliver will need to step it up, and I think a lot will depend on our wing backs Acuña and Montiel.

Yeah I agree. We got better pace and good for counters. Still we are bit less protected on the defensive side and maybe our ball possession could be affected a bit too.

We have them all in the bench though and it’s good to see us with more options available to us.

I think Lope is trying to ‘finish the game off’ in the first half and then controlling it in the second this time.

I really don´t think Osasuna falls for something like this, they normally seem well organized. It´s quite stupid if they play into that.

If they play conservative as a block, it´s already forcing us to play extremely well or do something extraordinary which in this case non of our attackers really excell in. But yeh we never know how it turns out on the pitch. I don´t want to put too much pressure on some Martial Magic either yet.

I won’t put any pressure on martial yet either. We got to remember it takes time to build up a relationship with his team mates to be on the same wavelength. It will be interesting to see how Martial and YEN link up.

I didn’t expect this lineup from lopetegui to be honest. I thought he’d go to the usual more conservative system and players we had playing in recent games. I still think it’s nice to see this though and lope trying to win the match in a different way.

If things get a bit complicated or go awry for us no doubt lope won’t be afraid to intervene and make the early changes to help turn the tide. Let’s see. Vamos Sevilla!

Pleased with the line-up. Great to see Martial starting.