So, like every other game we’ve played since the World Cup?

We got nothing to lose tonight. Recent good home results have helped ease a bit of pressure. I feel we can play with a bit more freedom and be dangerous to Barca.

Barca are obvious favourites but I see us putting up a fight tonight. Vamos!

I just hope we play them better than the first game…

We never normally do well against Barca and our home game this season was no different, so no doubt they’re big favourites and we’re up against it.

However, I’m more confident than I was a few weeks ago and think we’re in a better place than the start of the season. A few decent home wins in recent weeks has taken some of the pressure off. I get that Getafe, Cadiz and Elche are a different kettle of fish but maybe we can spring a surprise.

Nothing to lose though. I see it as a free hit, a game we’re expected to lose. We may as well go for it as this season this isn’t the game that will define us. You just never know. We’ve got to win against teams around us and that’s what we’ve been doing in recent weeks.

This will be the toughest match for Sampaoli since he arrived this season after the one vs. RM in 22nd of October. We’ve lost that one 3:1, but it was only Sampaoli’s 2nd week or so - now he has a much better idea of the squad, we have a better tactical shape and have a bit of a momentum after 2 La Liga wins in a row.

Not saying that I’m optimistic about this one, because we’re still very behind on quality (especially in the midfield) compared to Barca, but on a good night and with the right approach, anything can happen.

If this will have an ‘embarrassing night’ written all over it by the end of first half, I won’t watch the second, so hopefully that doesn’t happen. Anything else is a bonus at this point. 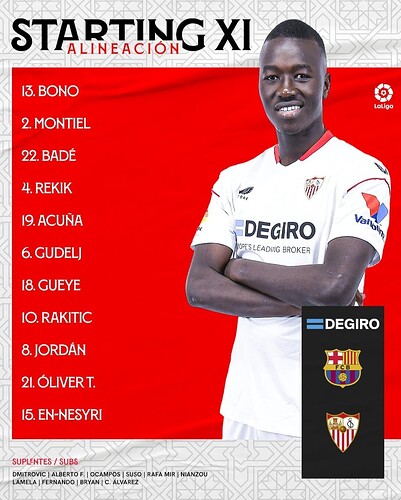 I saw Gueye and I said “yes! No Jordán!”

But then noticed that Jordán is there. And thought “oh, weird, he must have benched Oliver to fit in Gueye”…and then saw Oliver was there. And then Gudelj.

Looks like 5-3-2, but most likely 5-4-1 again, with Rakitic to operate as a left midfielder. But I’m surprised we didn’t use any of our 4 wingers. I know our counters suck, but jeez, give us a chance!

Also En-Nesyri needs to make those finishes count. His goals last week were shot a bit too close to the keeper.

I have low expectations, but i wanna at least see them raise their level a little bit.

I saw no Ocampos and no Lamela and thought OhShit. Then I realised no Fernando and thought Ooooooh Shit, and then I thought Suso? He’s been a provider recently.
Well I’m not the manager, just hope his plan works. It seems incredible that Papa Gueye goes straight in without minutes as a sub.

I’m at lost as to why you wouldn’t start two of your most creative players, Lamela and Ocampos in a game like this.

A very strange starting 11 but that’s Sampaoli for you. Very unpredictable what to expect.

Quite a defensive set up by the looks of it which I’m not sure is the best thing to do at Barca but I’m not the manager, so let’s hope it pays off.

Maybe his intention and plan is to keep things tight in the first half and then if they remain so, try to go for the win in the second.

These conservative strategies usually do not play well and this could easily get messy if the players are not 100% concentrated and up to the task.

A goal from Barca in the first half will be enough to dismantle this strategy and then who knows what happens.

Maybe his intention and plan is to keep things tight in the first half and then if they remain so, try to go for the win in the second.

It looks like that, he must have a lot of confidence that Barca will not put the game beyond reach in the first half. I think it’s an error and we should start with our most offensive lineup and defend as necessary.

I agree Tim, we are Top Club and shouldn’t be having 5 defenders in any match.