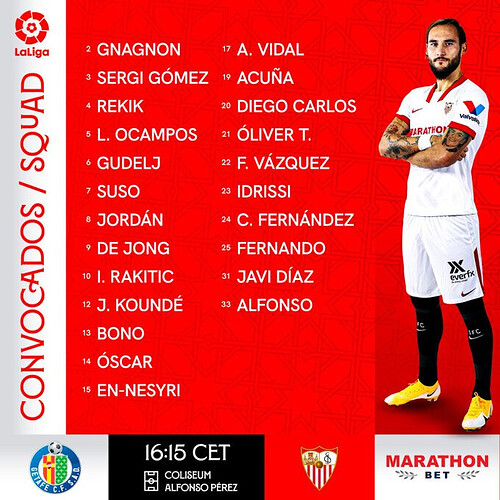 No real academy players for once. I know Alfonso, but that is because of Vaclik being injured, all first team outfield players.

Highly unlikely with YEN in fine form at the moment. Hopefully we see him from the off rather than de Jong starting.

So Navas is injured. Who do we start at right back? I know Koundé has been playing there for a bit, but I would much rather have him at Center back. Probably Vidal? I’m also thinking about Ocampos, he made a great makeshift right back against Krasnodar after Navas got sent off.
It will probably be Vidal, but I’m not sure if I fully trust him.

I think Vidal starts with Rekik out to the left

Yeah this could be the “solution” for the full back positions. Hopefully Acuna will feature in the second half and that Vidal has a good game on the right.

Defence will almost certainly be:

I would be amazed if it isn’t.

I think we’ll have to pin back Cucurella. If he’s allowed to he’ll run riot on that wing. Although Vidal doesn’t have the attacking capabilities of Navas he might do a reasonable job on Cucurella.

If he starts LdJ then he’s an idiot. Always waiting for us to go behind before sticking our main scorer on.

I’m surprised Acuña is in the squad so soon, what 4 weeks into the projected 10 weeks? I’d be even more surprised if he is risked.

I’m surprised Acuña is in the squad so soon

It was his ‘isquiotibiales’ an injury so bad you can damage your tongue trying to pronounce it. It used to be 6/7 weeks minimum for a torn ham string but it’s down to 4 weeks nowadays and I think Acuña suffered from a partial lateral rupture certainly not a complete tear.

It could go again easily but hardly likely to result in a complete tear.

You are confusing escudero y acuña 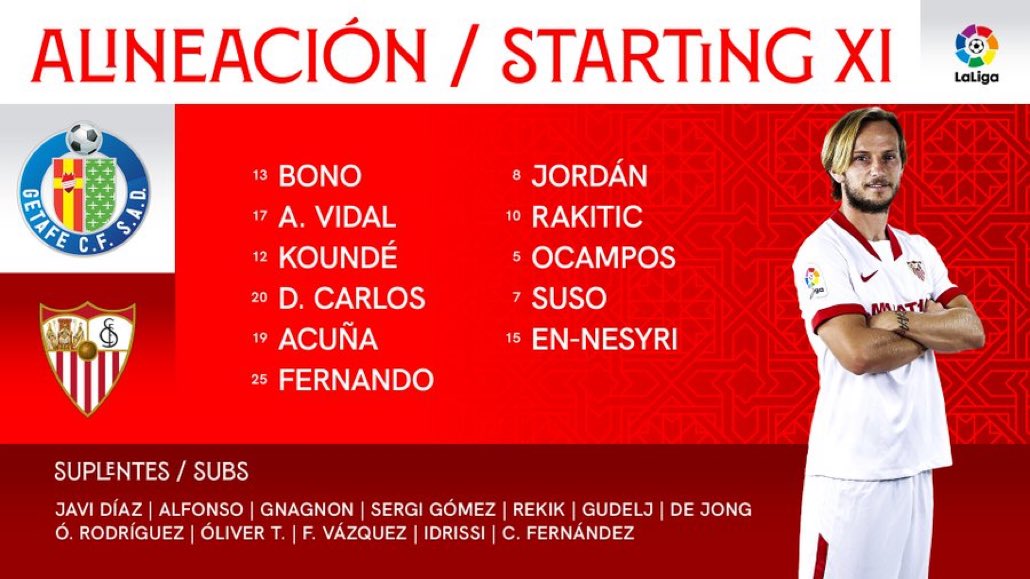 Wow, Acuna with the start? It seems a bit rushed, hopefully it will be all good.

Apart from Navas missing, this should be our best lineup. Good to see Jordán back. I feel like he should always be playing.

One out. And that is the one that probably shouldn’t have been rushed back so soon.

Hope we stick about 7 past David Soria today.

We was in less than a minute into the game there, but such a poor ball from Ocampos to Suso, behind him, should have been into his path.

Regardless of whether that is offside that should be a booking for Soria. Knee straight in YEN’s back.