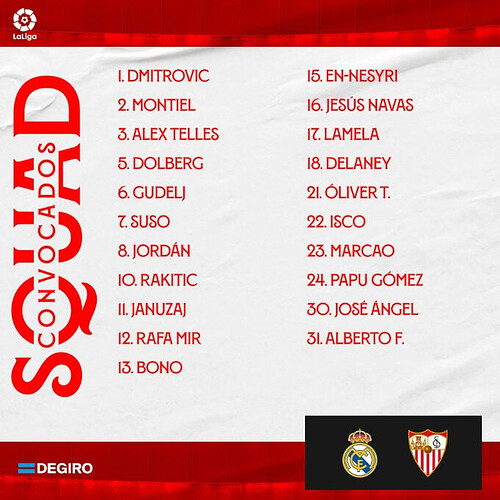 With this we have a fighting chance, as long as we up our game and limit the mistakes. I’d rather have Isco thru the middle, but there’s no one else to play on the left. Papu is better off the bench right now. I only put YEN because Rafa played all 105 minutes midweek.

I’ve wrote this game off. Just hope we can make a good account of ourselves.

We’ve got to believe we can get a result, a draw would be great. I do think we’re good enough. If we’re capable of drawing away at Dortmund then of course we are and still unbeaten under Sampaoli.

Real obviously big favourites but we stand more of a chance under Sampaoli than we would have a few weeks ago with Lope as manager. Marcao starting would be a boost to us defensively and I think we need to go with experience tomorrow night rather than the younger lads.

If we do lose, there are more important games for us to get results in this season.

We’ve got to believe we can get a result, a draw would be great. I do think we’re good enough. If we’re capable of drawing away at Dortmund then of course we are

Perhaps Dortmund decided to be more cautious, but I think we started the game well, and properly managed the match. It’s a good example of what to work towards. I’m just worried not having Nianzou, or even Rekik, to partner Marcao may be a step too far.

But as always, nunca se rinde.

1 Straw to clutch at. Benzema out due to injury.

1 Straw to clutch at. Benzema out due to injury

So now we only need to kneecap Vinicius, drop Valium in their water bottles and avoid death by referee and the job’s a good un.

I believe in Gonzalo Montiel. Vini is incredible but falters and forces a lot too without Big Benz the spotlight is full on even more so than normal. I have hope we can make something special happen tonight.

There is no pressure on us tonight. Let’s just play our game and see. We still have a long way to go but there are promising signs.

Our football going forward has slightly improved as we would expect under Sampaoli. It’s going to take patience but the 2nd half against Valencia, dortmund game, first half against Athletic club and parts of Mallorca game we looked better.

Our defence is still a worry but we will get there. We have a few injuries at moment so we got to ride that out.

I don’t hold out much hope tonight but hopefully we can play well and at least improve our play in both boxes and give them a game.

Our defence will look a worry, it’s not like we haven’t been saying for two years previous we needed decent cover / replacements for Kounde and Diego Carlos, then we sold BOTH at the same time!!!

Not only that, but clearly we had no plan on how to replace them as we then ended up scurrying around in the bargain bin for Centre Backs. I bet Christmas has come early for Jose Angel and Kike Salas as there is no way they would have been expecting to start La Liga and Champions League games 3 months ago.

Rakitic & Jordan start. Marcao is back. 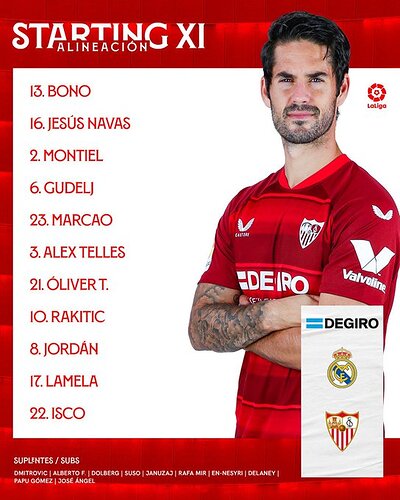 I completely agree. Good analysis. We had so long to plan but sadly our board sat on their hands to long. Let’s hope they learn from it for the future.

I guess you don’t rate Rekik. No one forsaw Marcao being injured to start the season. And if the board was willing to spend, we’d have gone after Kehrer or Nelsson when we were linked with them.

I guess you don’t rate Rekik.

I don’t either, he started some games for the season and was culpable for some goals. Was never starter material to start with.

With Marcao I agree on the not expecting injuries part but having only him and Tanguy is pathetic planning.

Anyway, this game is too late for me so I won’t be watching it. Was hoping to save some legs for the Copenhagen game and Papu is on the bench, that game is a must-win if Sevilla want to make it to Europa. Better to just blood some youngsters and have them try their hand at Modric Kroos and Valverde. If Sampaoli can get his tactics across and some decent reinforcements in the winter window we could give them a sterner test in the reverse fixture at RSP, wasting too much energy and risking injury at the Bernaboo is not worth it.

He really does like Lamela up top huh. Some sort of 4-5-1 I guess. On the left Lamela is subpar, wouldn’t like seeing that too much.

I like Rekik but I wouldn’t call him a great central defender, he’s a great utility player. The whole point is that Marcào and Nianzou needed proper cover, like Koundé and Carlos did, not two young dudes from the cantera. Granted you can never predict when and where the injuries will happen but they tend to group in defined areas like defence or attack, or left or right, it’s Murphy’s law.

We’ll need to do a job on Vinicius or he’ll have our trousers down.