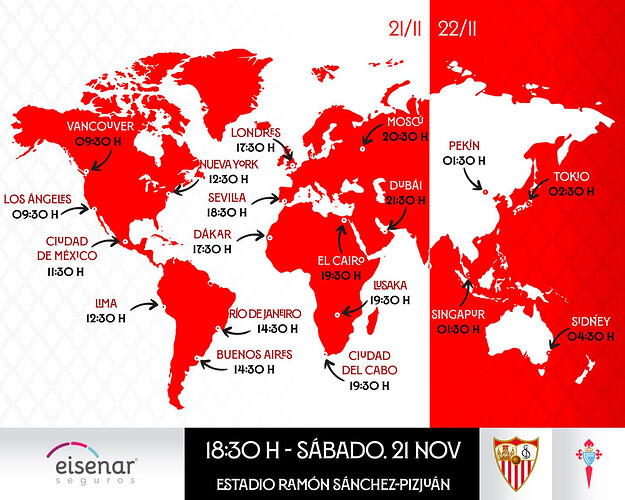 Lopetegui: "Celta will be dangerous with the impulse of a new coach."

It may be a case of a new manager bounce as Celta Vigo visits Nervión on the return from the international break. This adds an additional layer of trickery to the fixture, as we failed to obtain 3 points in both matches last season. Furthermore, it’s only 1 win in 5 against Os Celestes. With ex-Sevillistas Denis Suárez, Nolito & Iago Aspas likely to take part, there should be no surprise if the Galicians come to the RSP with more confidence. 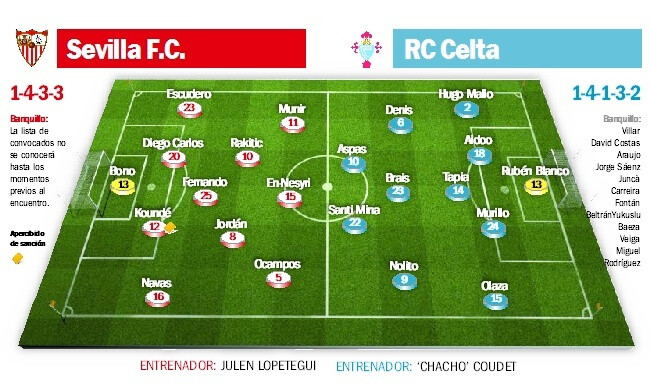 Suso returns to the treatment table with another injury, while Carlos Fernández is out indefinitely after testing positive for Covid-19 earlier this week.

Although the team ended their 3-match losing streak last time out, it still took a 2nd half penalty from Ocampos to win the game. It was akin to our struggles from last campaign, where scoring issues were a common occurrence. Signs point to En-Nesyri leading the line against Celta, as De Jong is likely to be rested ahead of the midweek trip to Russia. The fullback positions remain in the balance as Marcos Acuña remains a doubt, while Jesús Navas hasn’t been ruled out by Lopetegui. Is Julen really about to bench the captain on his birthday?

Well Celta are guaranteed to score then.

No Bono no. Has no doubt travelled with YEN who might be next.

It’s probably Vaclic then, and he will make full use of his opportunity to recover the spot.

If YEN has it we are down to one striker… One striker that played a shit load of minutes for the Dutch. 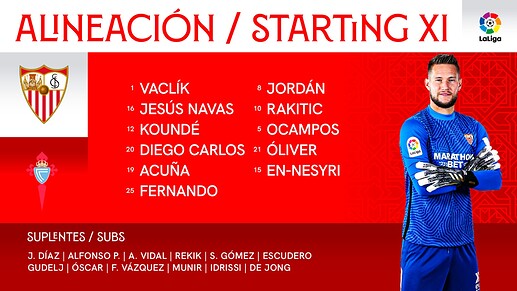 It seems like something of a departure from the norm.
Doesn’t look too bad to me, but will have to see how it works.

I mean we saw him use Oliver out wide a bunch last year.

Anyone want to jump on the podcast today after the match?

Vamos Sevilla! Let’s build on the momentum of last 2 wins.

That’s a blow. The bloody rona is rife everywhere in Europe at moment.

Damn Navas in the book 2’

He also looks about 25 with the beardless chin.

YEN gets a great ball and finds himself in on goal and he welll let’s just not talk about it. haha

Oliver gets a shot on goal just a minute or so later.

An early goal is great for the team! Hope they can build off of it and grab some more goals

But Ocampos failed earlier with a player at the far post.

And next, YEN manages to shoot 9 yards wide from 9 yards out, obviously still having basic technical difficulties

Horrible error. Ever since he has gotten back from his injury he hasn’t been the same.