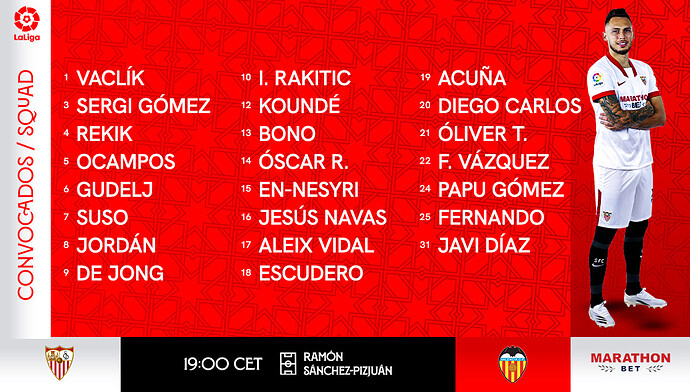 A midweek match follows the big encounter from the weekend, and it’s curious what changes Lopetegui will bring to the starting XI. The same squad of 23 players was called up, which still excludes Munir. Will he go with De Jong or En-Nesyri?

Although having a very disappointing season, Valencia is always a difficult team to beat, as they’ve brought in caretaker manager Voro for the 7th time. Now practically safe from relegation, Los Che can use this game to see how their squad measures up to La Liga’s best of the rest. Will they prevent Sevilla from achieving their best ever point total in a season?

What’s going on with Munir? We haven’t seen him for a few weeks now, and he’s joint fourth in goals for us this season. Is there something going on between him and Lopetgui?

What’s going on with Munir? We haven’t seen him for a few weeks now, and he’s joint fourth in goals for us this season. Is there something going on between him and Lopetgui?

His work rate seems to be the problem. Lope said that he is not injured, so I think that he already played his last match for Sevilla.

That really sucks. I rate him and see him as what could be a valuable asset to our squad.

We might already have a purchase lined up too being this late in the season and we are trying to prevent injury. Who knows. All speculation. He can score goals and it is a shame he’s been shut out. 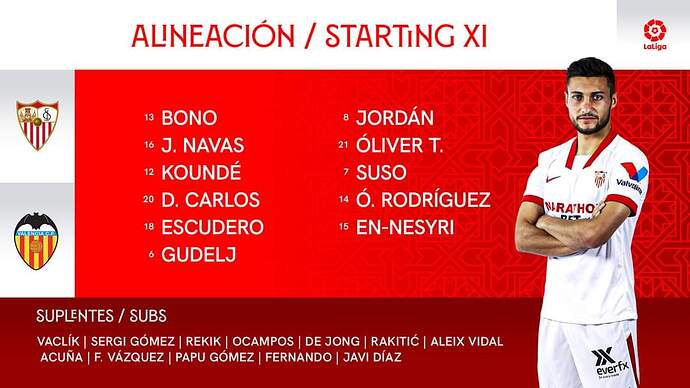 Alberto Fernandez seems to know things that happen behind the scenes, and he even says that it’s something between him & Lopetegui.

Oscar and Oliver in the starting line up, really happy for that.

Nice to see Oliver getting the start!

I like this lineup. We haven’t seen enough of that old Leganés linkup. And Oscar definitely deserves these minutes.

When Lope said he’s thinking of players who haven’t played much I immediately thought Oscar and Oliver. I didn’t think Escudero, he seems forgotten.

I think we should have pitched Oscar in much more often, as things are he can’t possibly be tuned up.

Fernando, Raki, Ocampos and Acuña on the bench, that’s a strong bench to have.

Glad to see the two O’s get a game.

I’m hoping that Oscar and Oliver can be a supply line for En Nesyri but I’m also aware that this might not work at all. We’ve had a couple of days to work on a plan and it’s not much. It should put some more incentive for Jordan to take control.

That should be a penalty, missed call though

Not working too well so far is it.

Some positive forward play, but again nothing really coming from it. At least we are getting some shots on goal from the run of play this week.

This is a bit shit to watch so far.