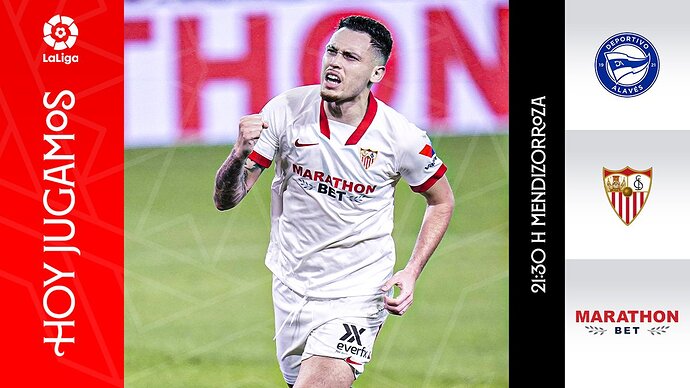 Sevilla continues their trek towards the north of Spain, as they visit the Mendizorroza stadium in Alavés.

Still reeling from the defeat away to Atlético, the team had to quickly put the loss behind them as the Copa del Rey fixture on Saturday was played in the same stadium. It seems they weren’t in too much of a hurry as it took 96 minutes to finally break down Leganés, after Ocampos scored in extra time. Now with another match on the road, Sevilla look to get back on the winning trail in the league. 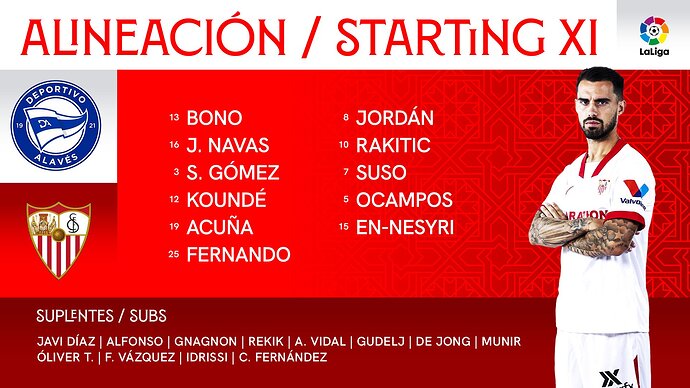 Carlos Fernández, whose name is more present amongst transfer rumours, finally made a return to training, after some time on the sidelines with injury. But perhaps what has been more poignant this week, was the news of Diego Carlos testing positive with Covid-19. Our ever-present leader at the back is said to be asymptomatic, and will likely be out the squad for a fortnight. The positive test forced the cancellation of their final training session before the match.

After coming out of a tough run of fixtures, Sevilla have a much easier set of games leading up to the business end of the season in February. As the team will resume the routine of playing twice a week, we will likely see how deep this squad actually runs, and if any reinforcements will arrive this month. Will we once again fall victim to the difficult trip to Alavés?

So it will be Sergi at CB. I would have liked to see Rekik play in his actual position.

Óscar left out the squad for Carlos F.dez … (who better get a subs appearance today!)

Looks like a typical game to throw. After a good run against good teams, I fear some mediocre results coming. Hope ofcourse not as we should have this one.

btw not a fan of the new logo of Alaves, the old one was pretty cool. But if they wanna be spanish Hertha Berlin, go for it 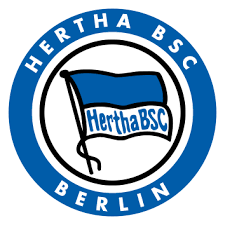 same, Oscár will get there he just needs playing time. Makes zero sense to give it to a Mudo on the way out.

Prediction of the night 2-2.

If CF is there for the cameo role to render him fit for sale, I’ll be mightily disappointed in that tactic. Looking at the team, it should be strong enough to bore Alavez into submission.

Oscar being left out is a bit weird. Maybe his fitness is a bit off? Anyway, keep an eye on Navas’ hammy. Only a bit over a week since he was subbed off.

Oscar out and Mudo in us such a stupid move, as is Jordan and Rakitic as the middle two AGAIN!!!

My prediction, 2-3. Gudelj enters on 66 minutes, YEN scores 2.
And now, seriously, Suso needs to step up to the mark, he is integrating, though slowly. What he needs to do now is not rush his shots, have more composure. In fact that applies to the team from Jordan forward.

I agree with User1115, makes much more sense to play Rekik at his best place instead of Sergi Gomez, and not swap Koundé to compensate as left centre back. Oh nevermind that was just on the line up sheet, in the field he is right cb. nvm. But still haha

Fucking BeIn Sports - talking about the YEN transfer rumors. Sevilla are struggling financially like so many other clubs: https://www.sevillafc.es/en/actual/news/revenue-growth-sevilla-fc-covid-19-kpmg#:~:text=The%20figures%20in%20total%20show,we%20are%20all%20living%20in.

YEN with a shot from a Navas early cross. Not a lot of power on it due to the defender.

1 minute later, YEN fixes it by nailing it this time. Navas with the assist.

Yeah bad defending and terrible marking, and some luck and it goes in. Well we take a start like this. Can we continue scoring?