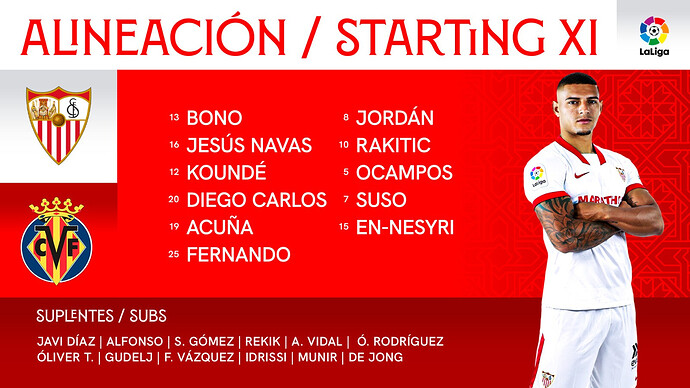 Former Sevilla coach Unai Emery makes his 1st return to the Ramón Sánchez Pizjuán as an opponent with Villarreal.

It has been just over four years since Sevilla was last under Emery’s tutelage, after winning his 3rd, and our 5th, Europa League title. He has been at PSG & Arsenal since then, but now will make his reappearance in Nervión with a Yellow Submarine team, which hasn’t lost since the end of September. Emery & co. will look to make it 20 games unbeaten against Lopetegui’s men.

The team returned to training on Saturday after 3 days of rest. It was the first time this season Sevilla has had a full week in between games. There were some doubts over the fitness of Navas & Fernando, but they have ultimately been selected in the starting XI. The Brazilian is still playing on 4 yellow cards, and is at risk of suspension. We have been on a bit of a run lately, and will hope to carry a positive result into the derby on Saturday. This is the first time that Lopetegui & Emery will meet as opposite trainers. In this battle of 6th vs 4th, will Unai’s previous away day struggles reemerge?

Q and A with Monchi’s Men admin Chris Lail

As we prep for Villarreal vs Sevilla, here’s a closer look at the Andalusian club.

In case ya missed it in the other thread. I chat about the Sevilla Villarreal match up with Zach over at VUSA.

I didn’t know La Liga teams had fan base in the US. They too must have been bored of watching MLS🙂

I don’t think we ever started watching MLS. Haha

This is going to be a tough matchup. Emery with a week to plan for this one and Lopo didn’t give him any wrinkles with the starting lineup. I’m not so confident with a positive result.

We should be able to beat them, but this game could go either way judging by the forms of the teams.

Villarreal haven’t put all of their starters out, Chukwueze, Estupinan and Kubo are on the bench and Coquelin isn’t in the squad. Emery feeling charitable versus Sevilla? lol

Draw or tight win either way.

I’ve seen that 6 times and even I’m not sure if that is a penalty to be honest. Oh well at least it is in our favour.

It was a very slight touch. Kinda weak, but I will take the goal.

Certainly not enough for a yellow card in my opinion.

Looks like we have gone the other way today. Score early then play absolute dross for the remaining 85 minutes.

Lucky to get that early goal. Having to defend a lot and try to get offense on a counter. That’s not our game but we are holding on so far.

What a save that was, I thought that had to be in from Diego Carlos.

Having to defend a lot and try to get offense on a counter.

0 attempts on target for Villarreal so far mind you.

I don’t know if it is just me, but Sergio Asenjo always looks like he is going through a sex change.

Yellow for Fernando. Misses the derbi

I’ll take being in the lead at half time, but wow we aren’t going to win any points for style are we?