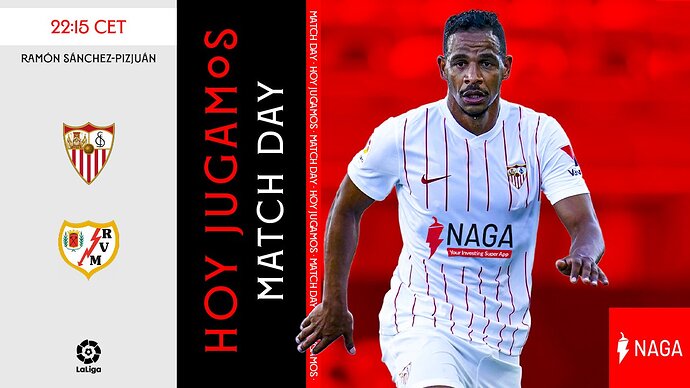 At long last, football returns to the Ramón Sánchez-Pizjuán, this time with supporters in attendance. Although limited to 40% capacity, it’s the first time since March 2020 that Sevilla will be backed by a home crowd. As we welcome back Rayo Vallecano to the 1st division, Lopetegui will look to start his 3rd season at the helm on a positive note, as the match presents itself with challenges.

After finally having a pre-season to prepare his team, today’s encounter won’t be as straightforward as it appears on paper. The squad is 2 weeks removed from the last friendly they played, as an outbreak has prevented the 1st team from playing its final exhibition away to Aston Villa. It is still unknown which 4 players tested positive, so today’s starting lineup can spring up any number of surprises.

Diego Carlos has returned to training straight after his Olympic triumph, and may be available for selection. It can be expected to see Kounde start on the bench, as we still anticipate his transfer to materialize soon. Regardless of the lineup chosen today, the 3 points are vital in order to keep up at the top. With significant roster changes among our rivals, does Sevilla FC have a chance at achieving the impossible this season?

Looking forward to this! Let’s hope for a positive start. A bit worried about the heat for tonight’s match but hopefully it’s bearable for players and fans.

There is excitement with fans back and hopefully more will be in stadium by September/October time.

We are active in the transfer window and now have 4 talented players to add to our squad. We linked with a few more too and hopefully get what asking price we want for Kounde.

This will be tricky considering the disruptive pre season with less games and few players testing positive for covid. We aren’t sure what line up lopetegui will go for but I’m pleased we kept the majority of our best core players. Plus Rayo are newly promoted so will be on a high and want to make a good first impression back in top flight. We will have to stay alert here.

Tonight is just about getting the win. It doesn’t matter how but hopefully we can get it to send our 40% crowd home happy. Vamos sevilla!

Big Season ahead indeed, last 2 weeks i’ve been getting more and more hyped every day for the start of the season again. With at last, 4 confirmed transfers, adding up to the hype finally. Very exciting.

Lope has gotten two great years so far, with 2 seasons 4th, the 77 point record, and the EL. But in this one we will actually see if there’s a growing process going on, or we have just played for results (from defense) with players peaking like Bono, Kounde, Nesyri, Fernando or Ocampos (first season) combined with the necessary luck on our side. Are we making another step as a club, this is the showdown.

Real Madrid, Barcelona, Atletico are still massive teams, but i’m predicting an Atletico struggling this year. Can we take over? I’m ready.

Not going to see any new outfield players for a couple of weeks at least. The squad is really cobbled together for tonight. The good news is that it has clouded over and taken the sting out of the heat.

Great comments guys! Looking forward to the match today. Please send in your thoughts to the podcast during or after the match. You can do that by going to themonchismenpodcast.Com and clicking on message. You can do it straight from your cell phone. You do have to create an anchor account but it is pretty easy.

Wait, are the messages audio messages or written messages 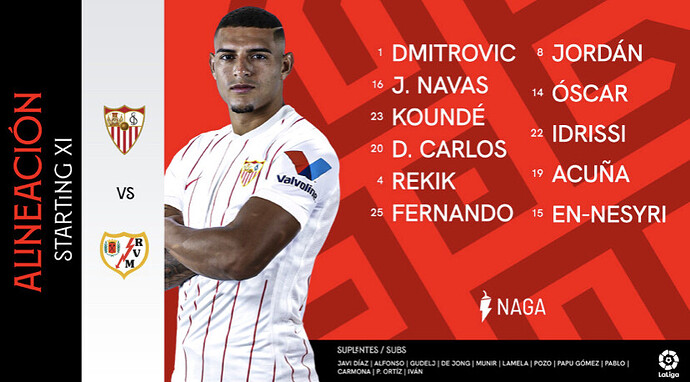 Weird line up for us, with three centre backs and also surprised to see Idrissi in the starting eleven. Today is probably day for Lamela debut, let’s hope for the best with him.
Where is Rakitič?

Lamela on the subs bench? I was reading that he was injured.
So Ocampos is one with covid+

What’s the story with Bono?

Thought the same, I don’t think he will get much minutes tho, but its good to see him there already.

Good to see we at least have a few cantera players to fill the bench. Perhaps Pedro Ortiz will come in to provide relief in midfield.

That’s not good at all. I thought Bono had covid last year? Poor guy caught it twice

We knew it was 4 players, as it is we still have a top team out there. So I’m grateful for that.

I like seeing Oscar in there. Idrissi with something to prove, needing to show up too. A motivated squad we need to see. In a 3-4-2-1 type of formation our wings should be dominating this match.

Only gotta win by 4 goals and we’re top of the league!

A while back I had a nightmare, we lost the season opener 1-7. LOL.

also it was somehow against RCD Espanyol, so it couldn’t be a vision of the future atleast haha.