Monchi offers me the job…

He must have been tired of Lope’s defensive tactics. 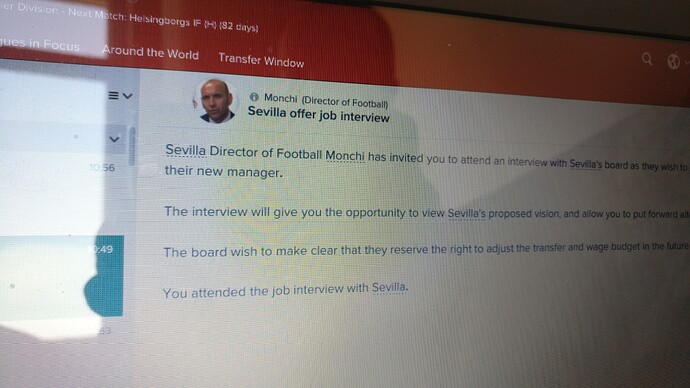 I really need to get a new Laptop so I can get a newer version of FM. Still rolling out 2017 from time to time.

Same here, FM 2017 is so much fun I never feel a need to get a look on newer versions.

I’ve got a great save file on FM 2017 in the Italian leagues.

Currently playing Kalmar FF in the Swedish League. Just won the title for the first time after coming second three times in a row.

Got lucky and snapped Regullion for free in my first year. He grows into an amazing player.

I lost him shortly because of minimum fee release clause😔

My Italian file I started at Cremonese in Serie C, real struggle, should have done better but managed to finish 10th which is a play off place in those divisions, but knocked out in the first round.

Applied for the Palermo job in the summer who had just been relegated to Serie B. Got that and started really well. Started to really grow and utilise the youth system. Dropped to second and drew 4, lost 1 in January, sacked.

So went about 2 months without a job then eventually a team called Taranto took me on. First aim to stay up, managed to finish 14th and safe.

Third season aim still to avoid relegation from Serie C, finished 10th, knocked out in first round again, then next season finished 8th and again early play off exit.

During that time though I had sold off the high earners, signed loan players with 0% contribution to wages, signed free agents then sold on at a profit. Took the club from about £5m in debt into about £3m profit, also built up the club training and youth structure. Next season won Serie C/C, then won the Serie C Championship tournament so I was also the outright Serie C champion.

So the game is currently in 2020/21, the team is 2nd in Serie B, still in profit, has a nice little youth system developing, new stadium, and I might as well have the keys to the City (Town?) of Taranto.

A lot of the players I have now are ones I started to try and bring through at Palermo. I also have Matteo Gabbia who had been on loan a couple of seasons and then I managed to get on a free from AC Milan. In real life I believe he is in the Milan squad now.