The Kings of the Europa League return to the round of 16 tomorrow, March 10th, 2022. Sevilla brings their record six European trophies into the match against a team that hasn’t had European success in some time. They look on paper to be the clear favorites; however, this Sevilla team hasn’t been very convincing as of late. 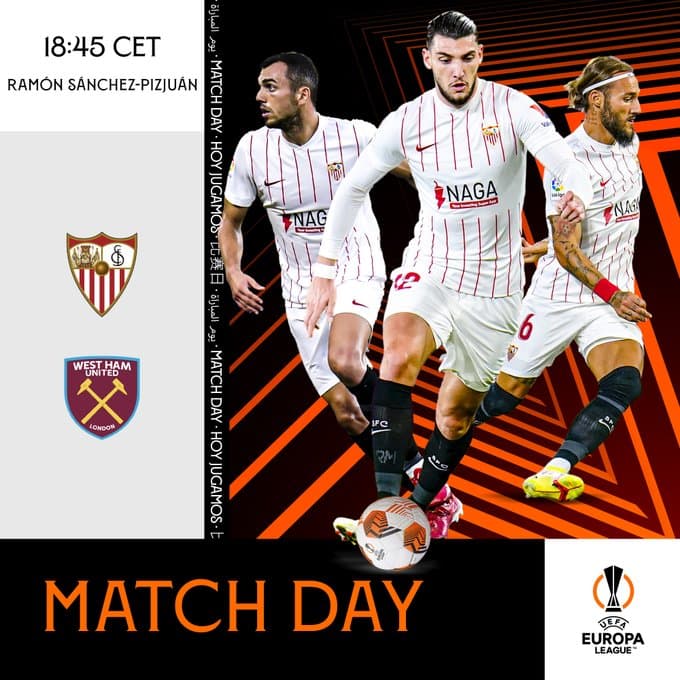 Injuries continue to plague this team as they bring just 16 first team players into the tie with West Ham. The available roster is below: 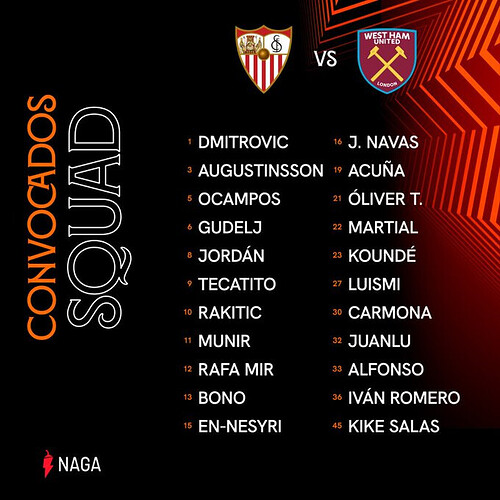 Key men and important starters are missing from that list including 2/3 of our holy trinity (Fernando, Diego Carlos.) Also missing out is Papú Gomez, Lamela , Montiel, Rekik, Suso, and the suspended Delaney. One player that has been injured is back in the mix. Big January signing, Anthony Martial, is back in the match day squad. Sevilla have only lost once at home in the 2021-2022 season and that came back in November against Lille in the Champions League.

West Ham brings in two straight losses against Liverpool and Southampton. They are the winners of their group in the Europa league topping the likes of Dinamo Zagreb, Rapid Wien, and Genk; however, they did lose at home to the same team Sevilla just dropped, Dinamo Zagreb. They are lead by Jarrod Bowen with 12 goals and 11 assists on the year. The Jamaican, Michail Antonio has 10 goals and 9 assists. The Spaniard, Pablo Fornals has put in 5 goals and 3 assists. They have some good players, an animal abuser and a famous manager in David Moyes.

It’s hard not to think that Sevilla with their European League record doesn’t come out with the victory, but recent form would make many question that bet. 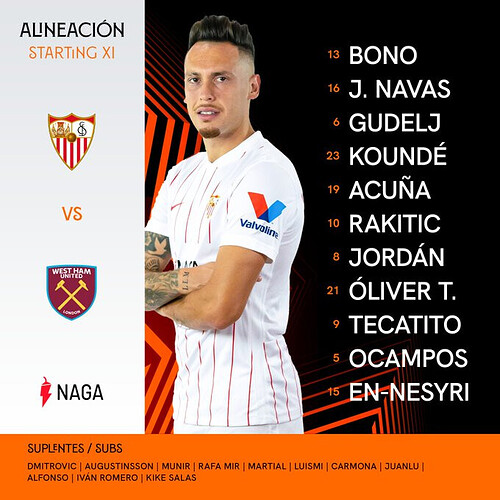 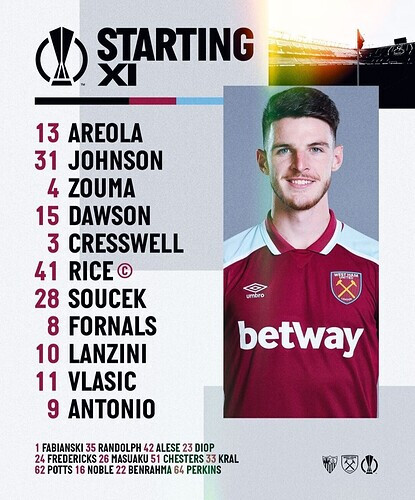 This first leg is a must win. I’m not confident with our away form and I think that if we don’t record a home win, I think we might crash out.
Let’s start this tie off well, hope for a two goal cuison going into the second leg

As I’ve said in the previous thread, I think it’s really important that we get a decent result in the home leg, preferably by at least two goals.

I do worry that we’ll struggle in the away tie otherwise.

Got to win this tie. We have a strong home record and play with better intensity at the pizjuan. I’m hoping we can get the win to give us a chance of advancing. West Ham aren’t easy though and will give us a tough challenge. They have pacey players and good attacking options.

I’d start Mir as I’m just not impressed with YEN and feel he isn’t what he was currently. Mir deserves the start over him as he’s in better form for the link up play and for goals as well.

I’m hoping Martial gets 30 mins off the bench to get back into it. We will see. It will be nice to have him involved as he’s more dynamic and makes us more unpredictable to opposition defences.

I’m concerned about the midfield. I personally think Jordan hasn’t been very impressive last few games but he might still start due to missing Fernando to injury, delaney suspended as well. It will be good to see Oliver start here I feel for more pace and energy.

As for the wingers and fullbacks they are easier to predict. Most likely ocampos and tecatito on wings and navas and acuna at fullback positions. I feel kounde-Gudelj will be the centre backs again to be fair the defence have did well last few matches.

I just want to see us come out flying. Enough of this playing it safe and not taking risks. We back at home for a big last 16 match and we have to trust in our ability and home form to go for a good win. We need to go for it tomorrow as we can’t rely on our less than convincing away form to see us through.

I just want to see us come out flying. Enough of this playing it safe and not taking risks. 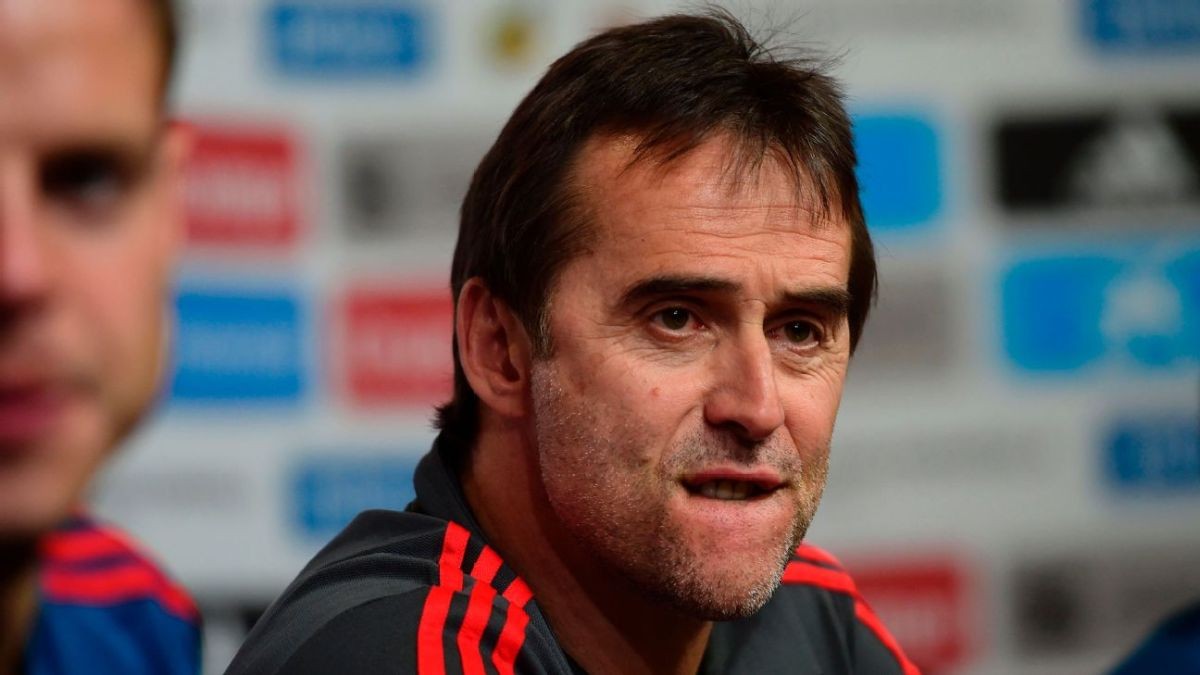 Bowen won´t play. So stop worrying about their best player? He´s not there.
We have 16 first team players, still not even needing to play canteranos?
They have hardly any experience in the cup and league. Not necessarily thinking this will matter. If they are an ambitious team, Its reason enough for them to give their maximum and not be afraid. We will likely struggle to force anything upon them, and our midfield will get outpowered by their fit strong guys like Rice and Soucek. And they´ll punish us where Alaves and Espanyol couldn´t. Lanzini is a threat as well. As Shendm said, they could have won vs Liverpool. Says enough about their strength.
Prepare yourselves.

If Sevilla come out like they did against :poop: I’m confident in winning

He has fond memories of his Slavia Prague team eliminating us a few years ago.

I always enjoy the matchups against English teams. Let’s give Moyes another rough time in Spain!

Westham and Frankfurt fans already went at it. That was also predictable. Both teams in one city, getting the home game at the same time. That one day difference doesn’t make the thousands of fans, avoid eachother completely. I get that it’s the draw, but one home and other away would have avoided potential extra problems. 4 big fan bases, or just 2, massive difference.

Anyway might make the police and stadium control a bit more severe. So good luck to the ones, on their way there, and enjoy the game.

Plenty of red legs and faces around tbe stadium already.
Good atmosphere with the mix of locals & west ham fans.

no red face but on tram now

Enjoy the game mis amigos. We need this one bad! 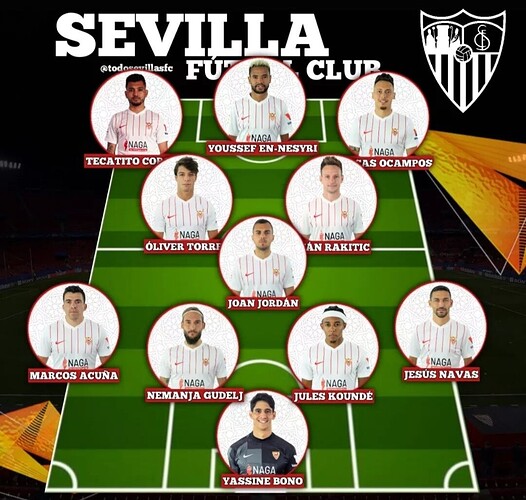 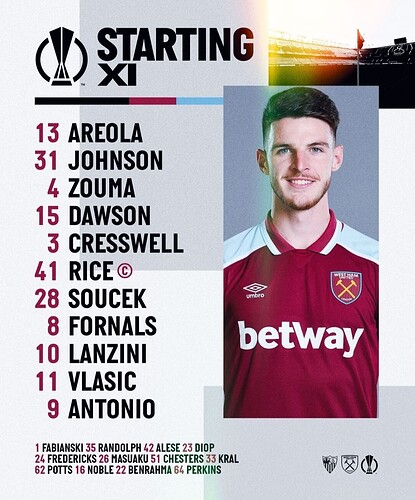 Line up as expected and I’m happy with it, but I would have started Mir also.

Massive match this for Jordan. He has to be a beast!

Mir, Martial and Munir as second half subs.