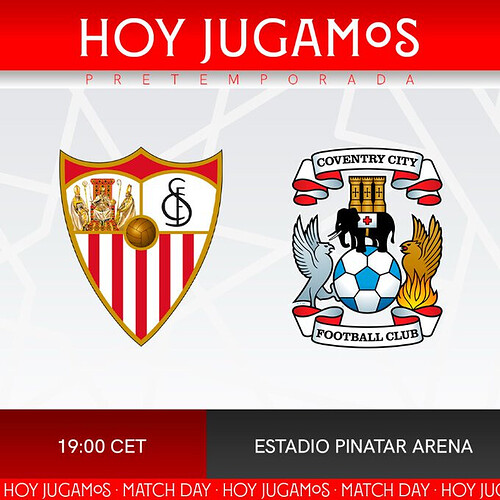 Friendly against Coventry City in Murcia tomorrow at 7:00PM CET.
Televised direct on Sevilla SFC TV and on the club’s website.

Sevilla FC prepares for its first exhibition match of pre-season, after completing the 1st stage in Algorfa, ahead of their 2021-22 campaign. Lopetegui has assembled a group of 31 players for the trip to Murcia, to take on English Championship side Coventry City. This will be the 1st of 5 club friendlies planned for the summer, as Las Palmas (July 22) & Aston Villa (Aug. 7) are confirmed opponents, while the other two fixtures have yet to be decided.

Broadcasting for the match will be made available through the club’s SFC website, as well as the team’s other pages on YouTube & Facebook. Also, this game is available on ESPN Deportes and ESPN3 in the US Markets, the first Sevilla game on the new La Liga broadcasters. 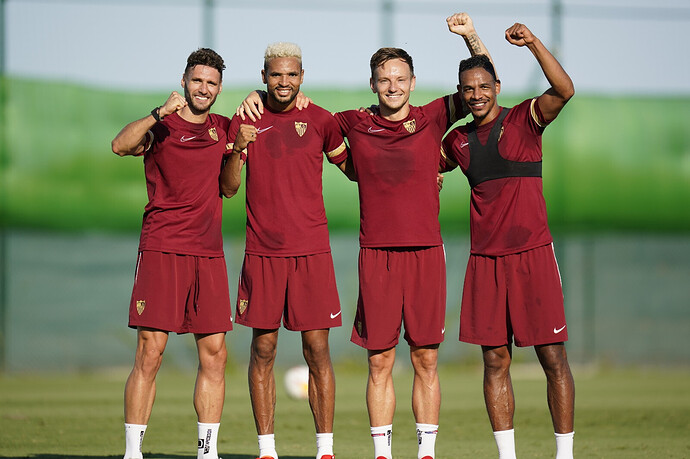 While we’re still waiting on the squad list, it has been confirmed that a number of cantera players will be among them. Excluded from the list are Amadou & Berrocal, who have been training separately from the team, and missed the sessions of the 1st two weeks. The latter is closing in on a transfer to Sporting Gijon, while nothing is known about the Frenchman. Also missing from the squad are the remaining international players in Kounde, De Jong, Acuña & Papu Gomez, and Olympic players Diego Carlos & Bryan Gil.

Young lads I would have my eye on are Pablo Perez (real opportunity with Acuña away!), Johansson seems to be loved by Lope, and Luismi Cruz. I really rate that guy!

It’s a bit hot down Murcia way, 7:00 p.m. is not good for running around but we’ll have plenty of subs (speaking of which Bryan Gil is on the bench for Spain who have just kicked off against Japan)

I don’t know but I’ll do a search. I’ve just plugged in the terrestrial aerial and nothing, so I don’t know if someone has pinched the aerial or they’ve stopped broadcasting on terrestrial.

You can also catch it on the Coventry City facebook channel.

Thanks. Not sure what time my break is at work today so will try look in on this thread when I get chances.

Edi has been itching for this write up haha. It’s been such a weird and unique offseason for Sevilla fans. I’m excited to be able to watch this on ESPN today.

@SurreySevilla no Pozo on your list. Do you know something I don’t? 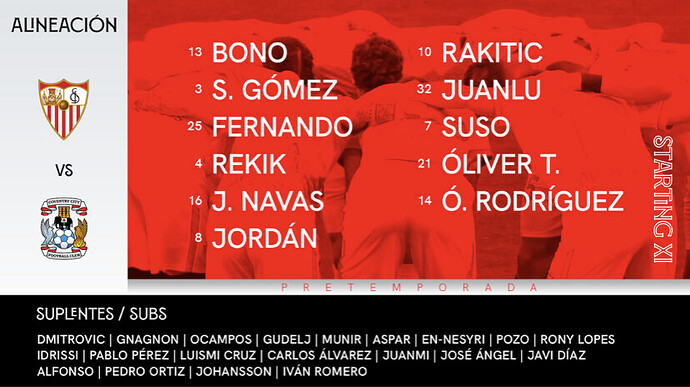 Yes. He also plays right back

Great! someone to keep an eye on

Hope Idrissi and Rony get minutes and play like they deserve to stay.

I couldn’t remember if he was off with Spain or not.

Was Pozo the only one I missed? Looks like no Zarzana. Swear that guy is always injured.

I don’t have any way to watch this, thought it was being streamed on the Sevilla website but apparently that’s only available to watch in Spain

My ESPN feed is a bit jumpy?

Fernando gets on the board.