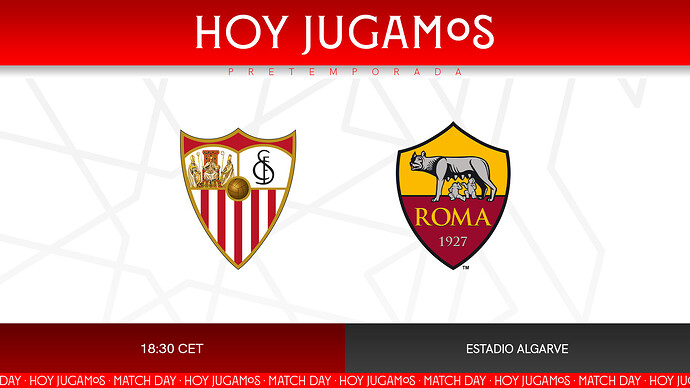 While most of this week has been centered around the status of Kounde, we remain light at the CB position, with Rekik being the only other recognized CB from the senior squad. Lopetegui will once again rely on the cantera players to keep things tight at the back, while the frontmen look to build some much needed chemistry.

This would have been the 1st of 2 games played this weekend, but the match against Portimonense has been suspended.

the match against Portimonense has been suspended

Thanks Ed, I knew there was another game scheduled, just couldn’t remember who.

Will Koundé be risked?

Any info on why was the friendly vs. Portimonense cancelled?

I could barely find any mention of it. It’s as if any info related to the game was just removed from some articles. 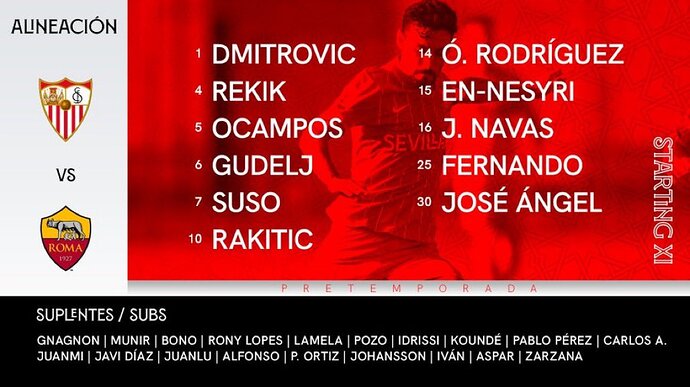 Weird we keep playing a RB in a back three instead of you know… Aspar or Juanmi who are actual CB’s.

I don’t rate Aspar at all. And might as well save Juanmi for the 2nd half

I’m not surprised… Aspar is a Sevilla Atlético player at best. We signed him from some nothing club last season too. Says a lot about Kibamba that he doesn’t even get a look in ahead of him.

Gonna be honest, I forgot he existed

Great chance for Oscar from a cross, but puts it over the bar.

Ocampos working his ass off today!

Gudelj falls asleep and lets a pass get by him, sends Mhkitaryan on the break, but Dmitrovic saves. wtf

The attitude the team is playing with is certainly different. Breaking with a lot of intent. I don’t know if it’s cause Fernando is on the pitch, or Roma getting that out of us.

Suso plays in YEN who shoots from a tight angle. Saved at the near post.

Where is this streaming?

Wait why did it change

Person who did it changed the stream for some reason

Sevilla playing well individually. Whether they can keep the domination is another question. Looking like an effective machine without some of our best players on the pitch. Just 2 or 3 players that are not in the least creative.Ocampos looks in peak physical condition and is darned functional. Great that Dmitrovic has made an important save.