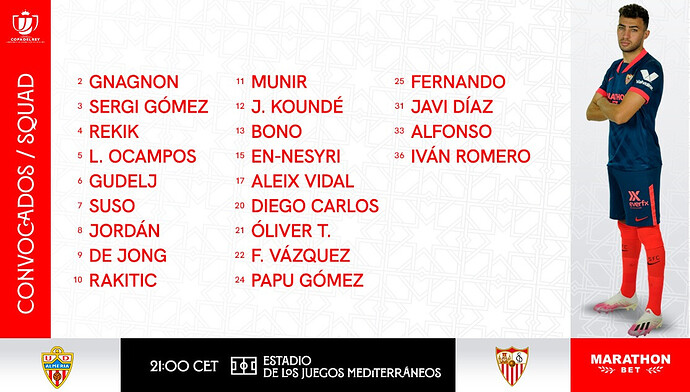 I hate to set young @ShendM off again, but no Jesus Navas or Acuña tonight.

Other absentees are Tomas Vaclik, Sergio Escudero and Óscar Rodriguez.

Really surprised given what I have seen that it is still Iván Romero getting call ups from the B team, but what do I know?

Navy kit gets its second outing of the season, not been seen since the implosion in Bilbao in October. I really wish Nike would provide us with Navy socks for it though, it looks crap with the bright Orangey / Red ones.

Vidal and Rekik it is, without full back subs

it looks crap with the bright Orangey / Red ones.

I like it. Navy on Navy would be boring. 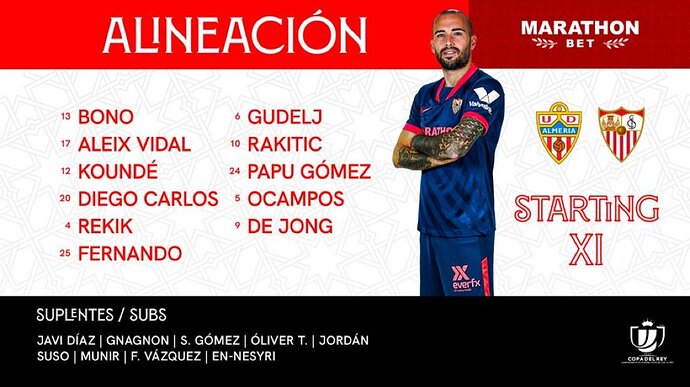 Super excited to see Papu Gomez in the line up, but i don’t understand why we are playing with both
Fernando and Gudelj. It would be better to see Oliver Torres get more minutes.

I had a feeling before Lope sees Gudelj as more of an out and out CM than a DMC.

Would have liked to see see tandem of Papu and Suso on either flank to be honest, but still we should have enough to get the job done. Full games for Vidal and Rekik to get some minutes under their belts and fitness in those legs going into these crucial 3 months.

Gnagnon still being punished by being forced to sit in the stands for no reason.

Just let him sit at home with his bargain bucket ffs!

Rekik wouldn’t have to join the attack and would cover the defensive left part better with Ocampos tracking down too, while Papu would play as a second striker, which is closer to what he played in Atalanta. Why not try it?

It depends where Ocampos plays. But i doubt Lope will complicate things now and just play him on the right, and Papu on the left.

I feel he can make Luuk look better and feed him well too. I predict 3-1. De Jong twice, and Papu making one as well ^^

Papu is the designate assister, but he needs the ball to do that.
I see a hybrid system with O’Campos moving around, as we’ve seen recently. Then he can combine with LDJ and Papu in the creation, but it still looks a bit lightweight up front.

For those looking for a link… 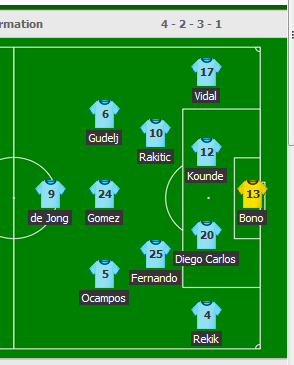 Have they had loads of rain or heavily watered the pitch?

loads of rain or heavily watered the pitch

I think they’ve over-watered it in some areas.

Every time the ball hits the ground water splashes up.

I got some pop up saying I had a virus

At least it wasn’t Covid 19

Criminal erroneous decision not to give Sevilla a penalty there.

Even it if wasn’t a PK, why the fuck did they get the FK? It should have been a drop if anything.