Without trying to get too political as much as this affects the Spanish population and of course Catalans, it also effects every club and fan of La Liga with the potential split from Barcelona and other Catalan clubs.

For those living in Sevilla, what is the general take from the locals on the referendum? What do the locals think? Is there any feeling of disrespect?

And of course for the main, the impending impact this would cause on La Liga if Barcelona are forced to leave (I see they have closed the club for the day - no training). This would undoubtably give Sevilla a greater potential to win La Liga but of course would weaken La Liga in Europe. Would Catalonia develop their own league which would be ridiculously one sided? Or would has been discussed all clubs have the opportunity to join other potential leagues? (French, EPL, Portuguese)

Not sure what the likelyhood of this happening but clearly the King of Spain in not happy with the Catalans rise for Independance. Not sure what power they have to stop this. It will surely also take a massive hit to Spain and Europes economy if there was a split. Wonder if it would also flare up Basque wanting Independance also?

Well Darren, they have every power to stop it because even the supreme court of Catalunya declared it illegal.

Without getting too into the politics, a lot of people are tremendously angry with the Catalans, they’ve been getting too much government money and Billions have ended up in Andorran banks. Then, they accuse everyone else of being bone idle because Catalunya has a high per capita GDP.

As far as the football goes, I can’t see the Catalans playing in any other league apart from the French, which of course would be an earthquake in the sporting world. They couldn’t form much of a league with Espanyol, Girona, LLeida and Tarragona. But if Barcelona were left in limbo, without a league for a year until the next season, they might go bust.

But I don’t think it will come to that, (that’s a pity) the matter will probably get sorted out pronto, I just hope that some of those involved in the insurrection end up in jail.

I can only think of good things for Barcelona people. I mean, there are exceptions for everything but in overall they were quite welcome, and they definitely deserve the right of independence. Now it will of course affect La Liga if Barca gets out, and I don’t think the Madrid Government will allow such thing to happen, as then the only motive would be… Atletico, and just when the TV rights are allocated a bit more fair and all that… it can’t all go to drain.

On the other hand, I come from a country with not the same, but a bit similar story. So my compatriots value the right of determining to be independent under oppression, though I think Barcelona is not is an urgent state to get independence, or else, how my country was, so maybe they’ll say OK…can live with it even if it will be declared illegal and all that. Trying to say it is definitely not a MUST for them to be independent, just like it isn’t for any community/region within Spain (basque etc,.)

The Catalans story just doesn’t hold water according to all of our Spanish family.

Very interesting if that is the case of the Catalans taking money and banking it in Andorra. I can certainly see a lot of unhappy Spanish with the independence play.

I can also see where ShendM is coming from, everyone certainly has a right to vote.

Definitely think it was a bit over the top to send in riot police to the ‘vote’. Whether it was illegal or note.

Barca in the French league haha. That’d be caotic.

It turns out that former Catalunia president Jordi Pujol had cashed 3% of all the Madrid payments into foreign bank accounts, he was only president for 23 years and some estimates reckon he’s creamed off €2 billion, deposited in Andorra and Switzerland, and his family including wife and two sons are also under investigation. Of course, this is the tip of the iceberg. Corruption runs rife, but especially in Catalunya it seems. Fast forward to the present and thanks to a revolving Catalan presidency, the CUP got hold of the levers of power. These guys seem more interested in suicide and chaos than the old fashioned corruption, they’ve been brainwashing 5 year-old schoolkids with hatred for their ‘oppressors’, politicized the Police force and imported half a million immigrants for block vote support. A type of political coup.

Now they can’t go independent because they don’t have any precise frontiers, aduanas, customs union, trade agreements, central bank, currency etc. What do they do with the SEAT factory that produces parts and vehicles in sync with other European countries. Barcelona cannot play in la liga, they and the players become unregisterd automatically. It’s a lot of organizing to be done before Tuesday if you ask me, LOL.

Another worrry is that the non independistas are frightened to protest, although they are a majority.

Another problem is that businesses are moving their bank accounts outside of Catalunya and the region is heamorraging large businesses like Banks and BioTech.

Everyone has a right to vote in a democracy, but no-one voted in this election because it was declared illegal by the two supreme courts, weeks before, it was a charade with people voting several times in different stations, including non Catalan people from Madrid

. Police were heavy handed enough, that’s true but it was set up for the cameras, the 800 injured turned out to be 100 and only 1 hospitalized, but 434 well helmeted police were injured somehow. The arrested old Granny, it emerges later, was an activist linked to Basque seperatist Otegi, not savoury people.

So as Chris says, there’s more to this than meets the eye.

But it could be very serious, for all the country.

Sorry for the rant.

Good to hear every side of it Tim, this is why I posted. As in Australia we only hear little of what the media wants us to know or think.

Sounds like a bad situation for Spain and certainly something that is affecting the entire country population.

Now the question could be… who (which group) is interested and wants to benefit from a potentially independent Catalonia?

Lots of videos emerging of Barca fans ripping up their shirts because the club entered into politics. 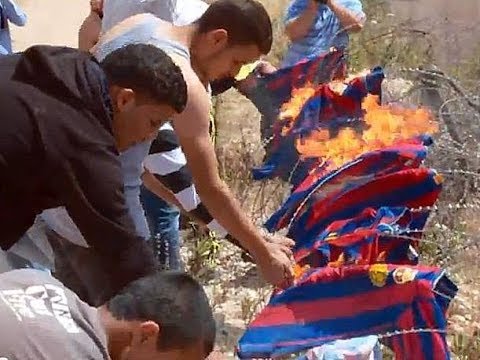