Are we a buy low, sell high team?

I know there’s this conception about the team that we’re always sellers etc and that that’s part of our identity. But I saw this recent article on soccernet (god awful site but whatever, forgive me).

Which clubs make the most profit in the transfer window?

Some clubs in Europe are better at making a profit than others when it comes to the transfer market, but how do they do it?

tl;dr, we are not in the top 10 of biggest profiters from the transfer market since 2010/2011, so I decided to see how we did stack up and pawed through transfermarkt for a bit. Please feel free to check/correct if you think I got things wrong, but here are our sales/buys each year since then and the players whose value (in or out was >10m).

It was interesting to me to realize just how balanced our in/outgoing transfers actually are. We should be grateful that our ownership generally reinvests in the team even if that isn’t always perfectly balanced in a given year. 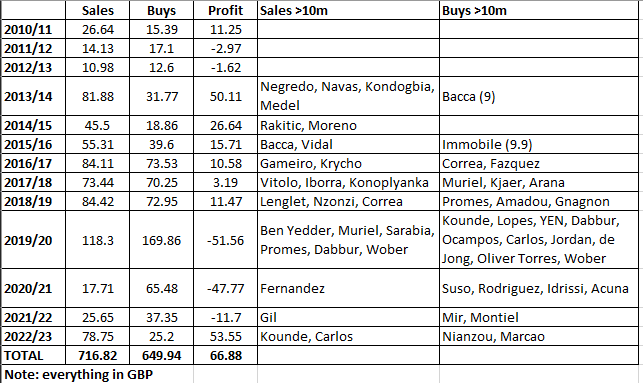 It’s a mixed bag, shows what can happen when it goes right and wrong like buying Amadou and Gnagnon over 10m a piece then we get great money for Lenglet, Nzonzi and Ben Yedder. It’s the players that we’ve bought for peanuts and sold for 30m+ that have floated the club.

We miss the money received from the Cantera too. We’ve had players like Reyes, Navas, Sergio Ramos, Diego Capel that brought in about €80m in sales.

@TimSpence2 I miss your ‘insider’ information.

What was going on today in the training? A video showed Lope talking to the players in a serious way… it was reported that the talk went on for 10 mins.

I don’t have inside info, my contact has retired, so I only have the street rumours. I was at lunch with 4 season ticket holders yesterday, opinions differ but they didn’t really want to talk about Sevilla FC, it’s over for them.

As Roy Orbison would say ‘it’s over’

I was at lunch with 4 season ticket holders yesterday, opinions differ but they didn’t really want to talk about Sevilla FC, it’s over for them.

Isn’t that what the old guys in the Taverna are always saying, though? The Abonados number didn’t seem to suggest fans are giving up. Surely some people will buy regardless out of pride and dedication to their team, but there are surely 5-10k who buy some seasons and not others, so the numbers I saw don’t seem to indicate people are “over this team” just yet…

They renew their season tickets as a matter of conscience and to keep their seat, it’s a badge of honour and loyalty. They’ve done it for 40 or 50 years and they’ve lived through the relegations and real problems.

They’re just particularly fed up at this point going into the 4th year of Dopeytegui without any illusion whatsoever, morelike foreboding.

yeah, true that the cantera is what’s yielded the bigger wins… or the guys we got very cheap who evolved under our watch. but it seems clear that we have more misses than hits when it comes to guys we bought for over 10m pounds… Kounde, Bacca, end of list.

makes me think that we should be less fixated on who our big signings are that we bring in, and focus more on not unloading promising canteranos before they’ve gotten a chance? we went for it in 2019-2021 and really made a mess of it.

i hope Nianzou and Marcao can change that disappointing trend.

They’ve done it for 40 or 50 years and they’ve lived through the relegations and real problems.

Surely that’s the case for 20-30, maybe even 60% of abonados, but there is no doubt a good 30-40% of folks who some years can afford it, some years can’t, some years are excited about the team, some years aren’t. There’s certainly plenty of room for losing abonados if they truly weren’t interested in the team. Let’s wait until the Champions League draw this week and see if they’re “it’s over for them”.

Sevillista seré hasta la muerte, and in spite of some ups and downs, nothing is “over” with Lopetegui’s Sevilla, even if we’re over Lopetegui.

even if we’re over Lopetegui.

Yes that’s what I’m saying,‘We’ and others.

It was interesting to me to realize just how balanced our in/outgoing transfers actually are.

I get the figures to be …