I thought this would be a bit of fun for people to have a bit of debate on how we should shape the squad in the Summer for next season.

This is the list of players we currently have (first team) plus players who will be returning from Loans. Players out of contract in the Summer will be noted with OoC next to them.

First up my preferred formation would be 4-2-3-1… I think it works better than the 4-3-3 Lope plays and it allows the likes of Óscar, and Papu to play in their preferred position behind the main Striker.

First up who would I get rid of…

•Jesus Navas - Controversial but I think he is done. I wouldn’t renew.
•Sergio Escudero - Same as Navas.
•Sergi Gomez - If a replacement can be found who is younger and more mobile
•Kounde - I don’t want him to go, but realistically it is going to happen, and the squad can be bolstered using these funds.
•Gnagnon - Well he isn’t going to play is he?
•Arana - Bye bye!

•Gudelj - Surely we can get better.
•Rakitic - The experiment hasn’t worked. Sorry.
•Mudo - Out of contract, no point renewing.
•Amadou - He’s rubbish.

•Idrissi - Would have too much competition with Bryan back.
•Jose Lara - Again probably not good enough.
•Rony Lopes - Same situation as Idrissi.

So that leaves me with (without incomings)…

•Bono
•Javi Diaz - One more year to cover Bono and Second choice, whilst Alfonso spends a season on loan)
•Alfonso - Loan to a Segunda Division team, aim to be in first team squad for 2022/23.

•Aleix Vidal / Alex Pozo - One of these as competition / back up to a new Right Back. If cost effective for signings elsewhere keep as 1/2 RBs
•Acuña
•Pablo Perez - Aim to get a decent loan with view to being in 2022/23 squad.
•Diego Carlos
•Rekik

•Ocampos (Unless we get a stupid offer for him!)
•Suso
•Papu Gomez (under pressure already in my eyes, but want to see him in the 3 behind a striker)
•Bryan Gil

That gives us 25. Of course as I say if more cost effective we may keep the likes of both Aleix and Pozo and probably De Jong.

So 14/15 definitely. The Kounde money plus anything we might get from YEN could be BIG on how we shape the squad.

Who are we looking at in terms of strikers?

Edit: would anyone give André Silva a 2nd chance?

Edit: would anyone give André Silva a 2nd chance?

I share your thoughts with you on this. I believe in Monchi, so let’s see what we will be up to for 2021-22. I think nowadays with knowing Monchi better, his philosophy on transfers, ideas etc. and if we keep Lope, we will most likely know by the end of the Summer transfer window if the next season will be fruitful or not. We know quite well what works in this system and what doesn’t, so we can judge the rumored and incoming players better, although of course you never know exactly in this sport.

@Edinho Yes, absolutely! He is doing very well in Frankfurt and even not leaving much space for the loanee Luka Jovic to be reborn after “dying” in RM.

I don’t think that we need so many changes, you can’t change half of the squad every two years. First thing is that we need new striker. We are linked with Boadu from AZ, solid young option, because Jovic is too expensive for us (maybe loan?). The second player is in the midfield, Banega like player, who is deep playmaker and can make stunning passes and not just passes back to the defence like Rakitic. Also we need a defensive midfielder who is competition to Fernando not like Gudelj. For the right back we could sing some young player and keep Navas for one more year, to be like teacher for the new player. But there are also a lot of free agents we could sign in the summer like Thauvin, Otavio, Bernat, Lucas Vasquez, Marega, Draxler… Maybe rotational players or starters, if we sell some players.

I agree we shouldn’t make so many changes. The trouble lies in the fact that we have so many players who are either not at the required level now (Gudelj, De Jong) of where we want to be, or are now starting to show age has caught up with them (Navas, Rakitic).

The other thing is to improve the overall squad, we probably have to lose one if not both of our highest valued assets.

It is interesting to me that we are now in March, and Jesus Navas has yet to sign a new contract. Whether that is the club, or the player holding out, who knows. There is actually a part of me that suspects that maybe Navas realises his career is coming to a natural end hence why he has been so keen to be on the pitch as much as he can this season. If he signs a one year extension then fair enough, but it has to be as a back up for me, he’s simply not at the level to be the starter over a 40-50 game season anymore.

I’ll give a more comprehensive reply at a later date but first piece of news about the upcoming season is the club are looking to renew Diego Carlo’s contract. He’s not top class but an able and physically imposing defender if he has a decent partner. A building block for the following campaigns then. 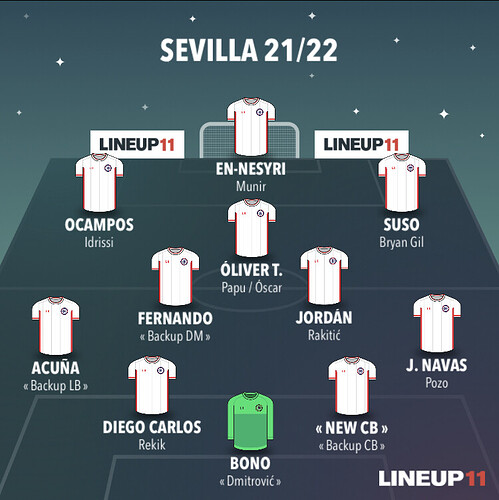 Defence: Whether he goes or not, i’m sure there’s already a list prepped for a Kounde replacement. There’s still a universe where D. Carlos goes too, and i would trust Lopetegui to build a solid defence back up. One of Gómez or Rekik has to go, and since the latter can fill in at LB, it’ll have to be Sergi. RB is a bit touchy, cause we’d have to put a lot of trust in Pozo in case Navas has another bout with injury. Personally, i trust the boy.

Midfield: Gudelj used to be safer than what he is now. But not once did i think he can takeover from Fernando. Also, a lot will depend on what our best XI is to finish off the season, but this essentially should be Óliver’s team, no? I still want to see him in the big games to come, but currently, that spot is his.

Forwards: I like Munir, but not as an option on the wing. It comes off sometimes, but often it shows it’s not his natural position. I’d like him better as a 2nd/3rd choice striker. His versatility pays dividends. The wings would get a boost with pressure from Bryan, so it’d be nice to have him back.

In summary, 2 CBs, LB, DM, and 2 more spots to be filled. So perhaps another RB, as Pozo could play in the forward positions, and another player from the academy like Zarzana/Romero?

Pretty sure Youssef will get sold as well. Plenty of challengers wanting him. And I think it´s a good moment to sell him. He has done really well, but in a way I don´t think his potential is much higher. For me, Him and Koundé will be funding our budget this summer. If the right offer comes, maybe doubtfull after this season. But i´m for selling Ocampos as well if there are still teams in the market who buy him off of last year he overperformed and I don´t think he is a player to build up on. If we can get close to 30m for him, i´d be happy. Then maybe 40m for Nesyri and 65-70 for Koundé. Would be a huge fund to try get top notch talent to bolster the squad.

Idrissi is not up for the level and it´s better to just give that one to Bryan Gil.

The solid core of our current team for me to build on. Would be:

Obviously Fernando is a major force but we can´t keep relying on him. Untill we get in trouble again. Just like Navas, we need to look ahead.

I don’t think we’ll keep Idrissi. He’s good but not good enough as a LW back-up for us if we aspire to get to the next level. He’s also struggling to be a starter at Ajax, however, surprisingly they might consider buying him at the end of the loan spell, probably as a back-up winger.

If we manage to keep YEN, then another striker is needed. LDJ has a contract until 2023 but I think it’s best if we sell him. I wouldn’t count much on Munir, maybe as a back-up winger and striker but not really sure.

Agreed with the rest of the planning.

Agreed on Ocampos and YEN. That’s what I also think on the build-on list, but I have my doubts for Suso and Oscar, though Oscar definitely deserves another season, and it’ll still be ok if Suso stays as we’ll have Gil to cover and maybe even get the starter role in the meantime if he proves himself here.

Pretty sure Youssef will get sold as well.

In typical Sevilla fashion, i wouldn’t be surprised. A pretty quick flip too. I could see us even get €50M for him! You know how Prem teams pay.

And for Kounde, you know we’re not accepting nothing less but that full €80M.

Ocampos not hitting the same heights as last year got me thinking he’ll at least stay another season so we could up that market value. But who really knows how this summer will go after the last one?

I think you’re right. Prolly another Promes situation. But we def need someone else with pace that can run at defenders. All these attacking mids won’t perform that function. The last game saw us with Suso/Óliver/Óscar and it took time to realize that one of them would have to do something different than to just drop deep for the ball.

Either way, as long as we make the CL again, we got another chance to build a strong squad. Whoever stays or goes… #InMonchiWeTrust

And for Kounde, you know we’re not accepting nothing less but that full €80M.

And to be real, nothing will change till Lope fixes them counterattacks. There’s also the issue of killing off games and actually playing well against big teams. Him being undefeated against

Okaaaay let’s get it!

I’ve liked what I have seen from Óscar in his last 3 appearances. The guy needs to be getting more minutes for me.

The one thing I absolutely have to categorically state is, Bryan Gil needs to stay with Sevilla next season, and for me he has to be a starter, no questions. The kid is the exact type from the Cantera we should be building our future around like we did back in the day with Navas, Ramos (I know!), Puerta, Capel etc.

Bryan Gil has to be a starter, no questions.

How would your frontline look for next season?

Ocampos, Suso / Oscar / Oliver, Gil behind YEN. I see the three with the / as their best position as the creative 10 behind the striker.

My preference would be Oscar, but I like Oliver, and I can’t really say Suso hasn’t played well as he has been surprisingly decent for me this season.

I’m not mad at this. Suso switched to #10 would simplify some things, but at the same time, complicate some others. He won’t slow down our counters anymore, and play in the role he was born for. But now that we’re making a full transition to 4-2-3-1, we’d be taking that spot away from Óliver & Óscar. And what about Papu?

(I’m not gonna hold you… Papu needs to prove it to me as well. I know he’s got the talent, but will it work?)