Sorry I don’t mean to steal Eddie’s thunder, just wanted to post up some team news from Lope’s press conference.

• Marcos Acuña is out for a good while as he has a tear in his Hamstring.

• Jesus Navas is a doubt for tomorrow, they will assess tomorrow but he could be out.

• Sergio Escudero is fit to play and we will decide if he will be in the squad given on what we need. Given we don’t have an actual LB in the squad I was somewhat surprised by that comment.

• Pablo Perez has only just come back from 3 months out and getting minutes with Sevilla Atlético so we might see him later in the season, but same can be said about other players from the B team, depending on how situations play out.

They don’t have to assess anything - they can simply conclude that Navas needs a rest and it’s time for Vidal to help us in the coming matches. We need Navas fully fit for end of February or March!

And yet I am working Lates tomorrow so I miss it and the Barca game Wednesday. 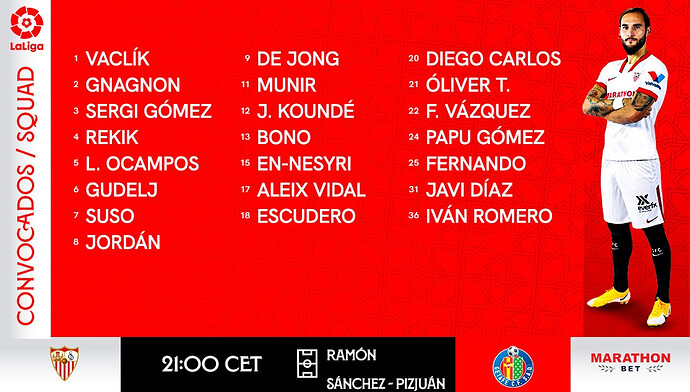 So there we are, Vaclik and Escudero back in the squad, for the first time in a few months.

Perhaps Escudero gets a run out at the end, but i’d rather we save him for the Barça game.

No Rakitić will make this a bit more straightforward, as i prefer having Jordán & Óliver start anyway. 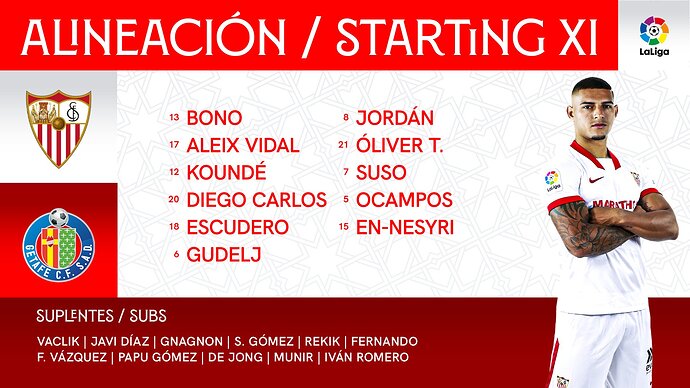 Escudero returns. I guess Lope wanted someone to wear that armband.

Hope to see some more chemistry building with the front 3.

I was hoping to see Papu but it’s okay

Surprised Escudero is back in so soon, especially after Lope’s comments in the press conference, BUT I am so happy to see a LB playing than a converted CB to be honest.

On the other side: 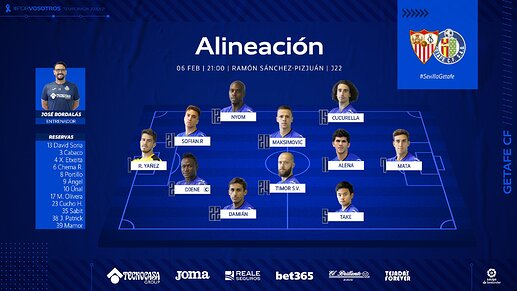 That front 4 doesn’t look too bad. I’m sure our CBs can deal with them, as long as those around them are doing their job.

Hope to see some more chemistry building with the front 3

That’s a good point, I’m pleased that Suso is getting the hang of things and looks much better in the last 6 or so games. Also hope O’Campos can get back to free scoring, though I think YEN’s presence reduces his scoring opporutnities.

The Troika of Fernando, Carlos and Koundé seems to make us more solid, so Gudelj must work his ass off in place of Fernando.

Hope that Escudero stays out of the rough challenges and gets his match fitness and game together.

Finally, hope that YEN gets another hat-trick and takes the Pichichi seriously.

Youssef En-Nesyri wins player of the month of January!

Ocampos tried the backheel flick he pulled off last season against Betis. Into the side netting.

Kounde with a nice move at the byline to get past Nyom, and was def taken down. No call from the ref.

No foul on that Kounde run? I mean I guess he could have just fell down, but I don’t see why he would have done that. smh

Don´t allow more of that Nyom guy, ref needs to give some limits or he doesn´t stop. What a rat of a player.

Second time Nyom has gotten away with a foul. Took down YEN in the box on the corner

Do you guys not remember Nyom in the reverse fixture? Was at it the whole game!